Floridians overwhelmingly desire changes to several gun laws, according to a Quinnipiac University poll released Wednesday, but what they want and what their legislators are willing to do appear to be on different paths.

According to the poll, the most resounding support surrounded the prospect of requiring background checks for all gun purchases (96% in favor) and banning gun ownership for anyone who's been issued a restraining order for stalking or violence (92% in favor).

Read the poll results for yourself

With March 9, the last day of the state Legislature's session, approaching, lawmakers have tackled gun control measures at a breakneck pace since the February 14 shooting at Marjory Stoneman Douglas High School.

With students, parents and their supporters canvassing the Capitol over the last week, senators and representatives have demonstrated an openness to enact certain laws, and a staunch reluctance to entertain others.

After each body's appropriations committees met Tuesday, the state House and Senate now have in their hoppers bills that would raise the minimum age to purchase a gun to 21, to allow police to confiscate firearms in the event of threats, to require a waiting period for gun purchases and to create a voluntary program that would arm teachers and other trained faculty.

The committees declined, however, to ban assault weapons and high-capacity magazines, and though a move to ban bump stocks didn't make it through Senate Appropriations, the House committee OK'd the measure. The Senate committee also declined to create a firearms registry and to require that only licensed dealers could privately sell firearms, while the House committee decided against requiring mental health background checks for those licensed to carry.

While several citizens spoke in defense of the Second Amendment at Tuesday's hearings, many young people, including students from Parkland, parents and ordinary Floridians pleaded with lawmakers for change.

"We need each of you to step away from politics and reach in as parents and grandparents," said Max Schachter, whose lost his son Alex in the school shooting. "Let's get something done today. ... You owe it to me."

Here is what Schachter and his fellow Floridians want, according to Quinnipiac's survey of 1,156 voters in the state:

Folks with guns in their homes were slightly in favor (49%, compared to 42% who oppose), while 63% of voters with kids in public school said gun laws should be beefed up.

You don't need a permit to buy a gun in Florida

Background checks for ALL gun buyers

While Florida requires background checks in certain cases, residents want a background check every time. That goes for 96% of voters. No demographic came in lower than 91% on this one.

Pollsters registered less support on the matter of banning semiautomatic rifles, with 53% of voters in approval.

This was another popular notion, corralling support among 87% of voters. The lowest level of support came from white men (81%). A mandatory waiting period for assault rifles saw similarly strong, but slightly less, support.

This was another strong one, with 89% of those polled saying they're in favor of police petitioning a judge to confiscate weapons from someone deemed at risk for violent behavior. Men (84%) and rural residents (83%) showed the lowest level of support for this measure.

Bans on people with restraining orders

Again, little resistance here, with 92% of voters approving the prospect of banning gun sales to anyone who's been the subject of a restraining order for stalking, domestic or sexual violence or repeated violence. Every demographic registered an approval rating of at least 85%.

Most Floridians are against local communities enacting gun laws based on community needs, with 56% saying cities and counties should follow state laws. Republicans (71%) showed the highest level of opposition, and voters with guns in their homes came in a close second (69%).

NOT allowing teachers to carry guns

Only 40% of voters felt arming faculty and other school officials on school grounds was a smart idea, while 56% thought otherwise. This was split along party lines, with 72% of Republicans in favor, compared to 11% of Democrats. Aside from the GOP faithful, the other demographics in favor were voters without college degrees (51%), men (59%), residents with guns in their homes (57%) and rural residents (50% to 45%).

A few other poll results:

Hi: 78° Lo: 33°
Feels Like: 50°
More Weather
Wednesday and Thursday night a cold front will move in and give us a chance for rain and t-storms. As the warm front moves in and remains stationary it will spark rain/storm chances Wednesday through Thursday. Thursday will be the warmest day of the week with a high in the lower 80s. A cold front moves back in Friday returning highs to the low 50s for the weekend. 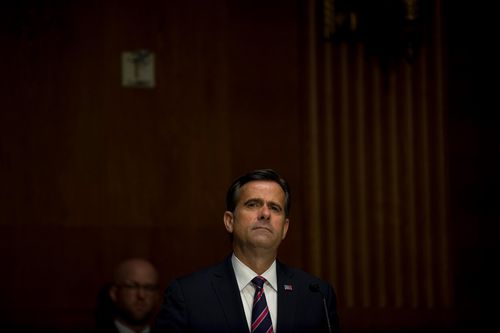