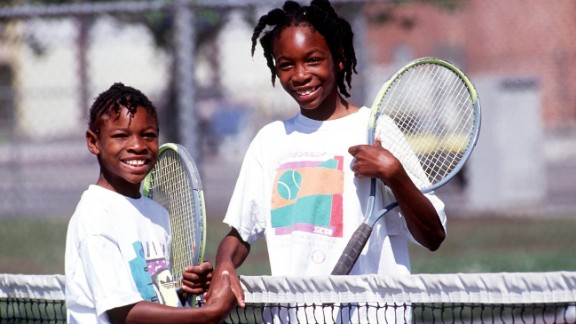 Venus and Serena Williams have won a combined 30 grand slam singles titles but their beginnings were humble, as their father Richard Williams told CNN.

Naomi Osaka and Victoria Azarenka are both two-time grand slam winners but when they crossed paths at the French Open, one was surging while the other sought a return to her finest days.

It was Osaka who held all the momentum having won the last two grand slams and the Japanese world No. 1 indeed ousted the Belarusian.

Yet she needed to rally for the second straight outing in Paris to oust Azarenka 4-6 7-5 6-3 in a two-hour, 50 minute contest Thursday that lived up to the understandable pre-match billing.

Osaka recovered from an even more ominous scenario in the first round against 90th-ranked Anna Karolina Schmiedlova, her Slovak foe unable to serve out the encounter twice in the second set against an admittedly nervous 21-year-old.

"I actually played well today," Osaka told reporters. "Against Vika, she has the ability to hit winners. I don't think the other girl hit that many winners.

"I was more making the mistakes."

Azarenka is capable of stringing together lengthy purple patches like Osaka -- she once amassed a mammoth 26-match winning streak in 2012.

But injuries and a child custody battle that limited travel after son Leo was born in 2016 dropped Azarenka's ranking, pitting her against high seeds early in tournaments.

"No matter how hard it is, it's my path that I'm going to walk with my head held high, and I'm going to do everything I can until the moment where I decide, 'You know what? I'm not interested in that anymore,'" said 43rd ranked Azarenka. "But until then, I'm going to keep fighting and keep improving.

"I believe that finally my progress is showing from week to week. And as long as it keeps going that way, I have no doubt that I'm going to achieve things that I want to."

Azarenka -- who toppled 2017 French Open champion Jelena Ostapenko in the first round -- led by a set and 4-2 on Suzanne Lenglen court.

The 29-year-old was close to snapping an eight-match losing streak against top-10 opposition at grand slams, before Osaka dug deep. The Japanese sensation exhibited the grit, not to mention shotmaking, onlookers witnessed at the US Open and Australian Open.

Putting Osaka away, especially at majors, has become increasingly difficult.

"I have this mindset that I feel like I can win if it gets down to the wire. If I have to break a person, I feel like I have the ability to do that," said Osaka, who next plays another unseeded but dangerous challenger, Katerina Siniakova.

As the match slipped from Azarenka's grasp in the third set, she flung her racket in disgust.

Trailing 5-1 and swinging freely, a momentum shift arose. Azarenka seemed to relax and all of a sudden clawed back to 5-3, saving a match point in the process. She felt a bad call deprived her of getting to 5-4.

One more match point evaporated for a slightly rattled Osaka but a third did the job when Azarenka's return sailed long.

Considering the slow surface and heavy conditions, they were impressive numbers.

This after the 23-time grand slam champion lost the first set of her opening match against Vitalia Diatchenko.

Despite Williams being fully expected to ease past Nara, the American cleared a significant hurdle.

Beset by injuries and illness, Williams had not won two singles matches in a tournament since January's Australia Open when an ankle issue affected her in a quarterfinal loss to Karolina Pliskova.

"It's just been really tough after that," said Williams, Azarenka's friend and a fellow mom. "So everything definitely feels a little bit harder than normal, but at the same time, I know that it's going to get better."

Up next for the 10th seed is the US's Sofia Kenin, one of the breakthrough performers of this season. The world No. 35 advanced when Canadian phenom Bianca Andreescu withdrew with a recurring shoulder injury.

Coming off a record seventh Australian Open title, Djokovic is aiming for victory in Paris to claim four straight majors for the second time in his career. The Serb marched into the third round by sweeping past Swiss lucky loser Henri Laaksonen 6-1 6-4 6-3.

The oft injured del Potro took a medical timeout for his right knee -- he fractured the patella last year and missed most of the next seven months -- but seemed to be untroubled by the end of the thriller.

A warm embrace ensued and del Potro applauded Nishioka, who suffered a major knee injury in 2017, off court.

The Austrian went four sets for the second consecutive round, beating the unpredictable Alexander Bublik 6-3 6-7 (6-8) 6-3 7-5.

Thiem was fortunate not to go five sets, since Bublik -- who hit an underhand serve for the second straight round -- led 5-2 with two set points in the fourth.

Hi: 92° Lo: 71°
Feels Like: 82°
More Weather
A very weak cold front has moved through Thursday night and gave us some early showers and thunderstorms. Temperatures over the weekend will remain in the low 90s through Sunday.