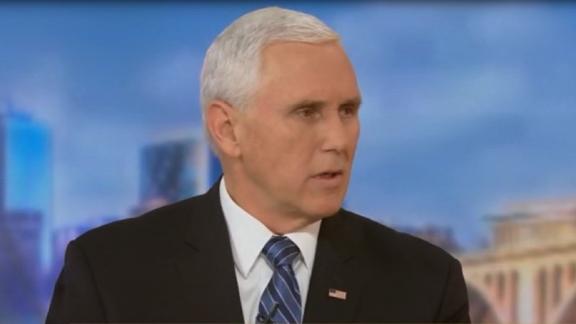 Vice President Mike Pence defends President Trump's shutdown offer amid criticism from hardline Republicans that the offer is not tough enough on DACA recipients in a Fox News interview.

On the weekend of Martin Luther King Jr.'s birthday, Vice President Mike Pence shockingly invoked a line from the civil rights leader's famous "I Have a Dream" speech to build support for President Donald Trump's proposed deal on the border wall. Asking legislators to agree to Trump's proposal of spending $5.7 billion on a border wall along with a temporary extension of the DACA program(that Trump dismantled), Pence said, quoting King, on CBS' "Face the Nation," "Now is the time to make real the promises for democracy." He compared King's belief in using the legislative process to solve social problems to what the President is trying to do.

The "I Have a Dream" speech continues to resonate to this day as one of the most important symbols of a civil rights movement that was committed to ending social injustice and dismantling policies that enabled the inhumane treatment of people living in the United States and all around the globe.

The comments made by Pence -- who works at the top of an administration that promotes policies that directly contradict King's message -- fly directly in the face of Martin Luther King's legacy.

It does so because this is an administration that right now is holding the government hostage -- leaving civil servants without paychecks and citizens without full benefits -- in exchange for a monument made of brick and mortar or steel that most experts agree won't do much to enhance border security. Not to mention that, under this administration, thousands of parents have been separated from their children at the border.

In a stark contrast to what King stood for, the Trump administration has repeatedly sent encouraging signals to the forces of white nationalism, starting with the President saying that there were "very fine people" among the neo-Nazi marchers in Charlottesville, the keepers of the flame for the white Americans who did everything in their power to stop civil rights back in the 1960s.

And as a way to promote the passage of new voting restrictions -- which would fall hardest on marginalized groups of voters -- the administration has promoted false claims of election fraud.

President Trump has even praised autocrats, like North Korea's Kim Jong Un and Russia's Vladimir Putin, all over the world who oppose the fundamental rights that King defended.

All of this has happened while the administration pushes for budgets that undercut social safety programs to help the poor.

As we've seen, nothing about this administration resembles King's ideals.

Martin Luther King Jr. spent every day of his life trying to tear down the walls that separated us. Most historians would agree that if King were alive today, his positions about this administration would be clear. He would be rallying citizens to take to the streets in red and blue states, to insist that elected officials reopen the federal government and to demand a resolution to the status of the millions of undocumented immigrants who currently live in limbo within the United States.

The civil rights leader would be demanding that legislators take a stand against the reactionary policies of the current President. King would probably revisit another part of his famous speech and talk about the "fierce urgency of now" that citizens must have in fighting for social rights. He would be calling for government officials to listen to the pleas of those seeking asylum and to find ways to treat those caught at the border in humane and decent fashion.

When the country lets "freedom ring," King said as he stood in front of the Lincoln Memorial, "all of God's children, black men and white men, Jews and Gentiles, Protestants and Catholics, will be able to join hands and sing in the words of the old Negro spiritual: 'Free at last! Free at Last! Thank God Almighty, we are free at last!'"

There is no justification for Vice President Pence to use King's memory to support the administration's policies. Doing so is a perversion of the work of one of the greatest social activists of modern times.

Hi: 59° Lo: 46°
Feels Like: 40°
More Weather
Temperatures will start to warm back up on Saturday with highs reaching back into the 50's. Another big warm up is headed our way as we go into Sunday and the first part of next week.