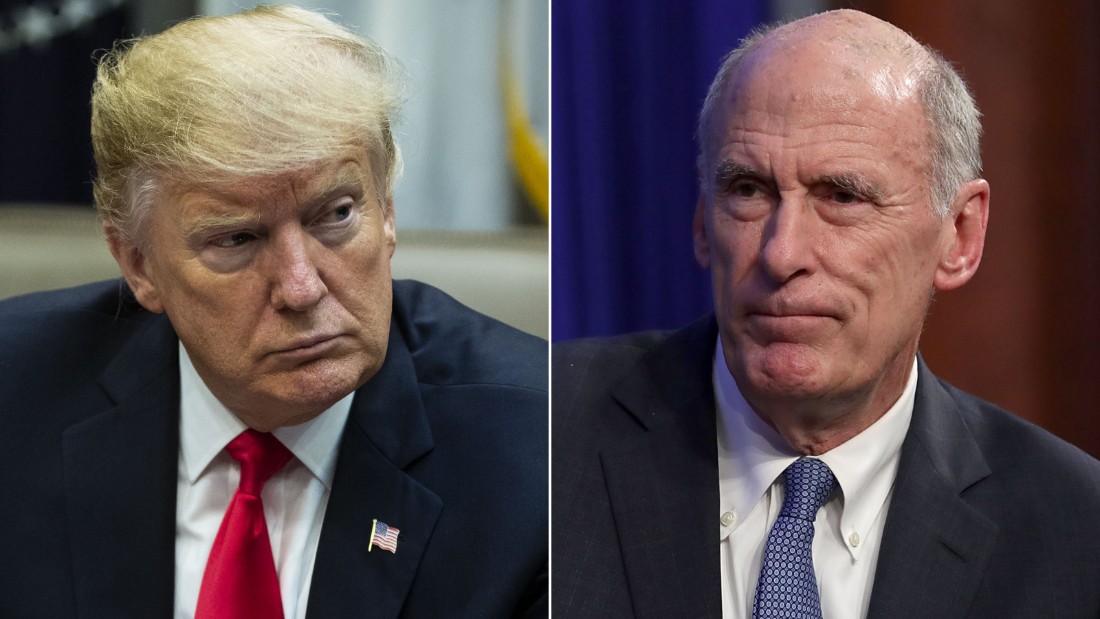 CNN's Kate Bolduan looks at the divide between President Trump and leaders in the US intelligence community when it comes to ISIS, Russia and North Korea.

Anyone who thought President Donald Trump would grow to appreciate the US intelligence community had their hopes dashed on Wednesday morning, after the commander in chief lashed out at America's national security professionals. His latest salvo came after the heads of several intelligence agencies made clear that they would speak truth to power, even if doing so risked upsetting their boss.

"The Intelligence people seem to be extremely passive and naive," Trump tweeted one day after the intelligence chiefs testified before the Senate and seemingly contradicted his view on the threats posed by Iran, among others. In a parting shot, he added that perhaps these professionals "should go back to school!"

The issue of Iran was only one of several instances during the hearing in which Trump was publicly contradicted by experts who have spent their professional lives studying critical threats. Despite Trump's claims of progress in denuclearization talks with North Korea, Director of National Intelligence Dan Coats said it was unlikely the regime would fully denuclearize. And, although the President previously celebrated the defeat of ISIS, Coats insisted the group still commands troops in the Middle East.

Sadly, Trump's attempt to discredit the national security community is merely part of a disturbing pattern. Who can forget his unfounded allegations in March 2017 that the intelligence community illegally wiretapped Trump Tower?

Then there was his stunning display of capitulation in July 2018 when he stood next to Russian President Vladimir Putin in Helsinki, Finland, and sided with the Kremlin over the US intelligence community as it related to allegations of Russian interference in the 2016 election. (He later sought to walk back these comments by claiming he misspoke.)

Trump's true motives in destroying public confidence in the national security sector remain unknown. It's possible he simply responds reflexively to anyone who questions his judgment. Or, perhaps, the reason is much more sinister, and he has been personally compromised, as some commentators have argued. Whatever the rationale behind his effort, his attacks risk undermining the morale and effectiveness of the intelligence professionals charged with keeping this nation safe.

For their part, it was refreshing to see the agency heads conjure the courage to speak the truth, regardless of whether their professional assessments ran counter to the President's. And, rather than needing a remedial lesson in foreign affairs -- as the President proclaimed -- they are the ones who schooled Trump on how the world really works.

Their fortitude, despite the risk of presidential criticism, should assure all Americans that these independent agencies, many who were appointed by Trump -- including DNI Coats, FBI Director Christopher Wray and CIA Director Gina Haspel -- will not be bullied into shaping their views of the world to fit the political whims of a politician. We've been down that road before.

Indeed, since the Iraq War debacle, which was marked by accusations that the intelligence community was pressured by the White House on the issue of Saddam Hussein's weapons of mass destruction program, these national security agencies have undergone wholesale change in the manner in which they assess global threats.

When I served in the FBI alongside CIA, NSA and Department of Defense professionals, those of us charged with protecting the country were constantly sensitized to the reality that modern day intelligence assessments must adhere to strict analytic standards. All assessments must be objective, based on every available source of intelligence and independent of political considerations.

These professional standards appear to run completely counter to the way Trump describes the world. His broad conclusions on threats like ISIS and hostile foreign government actors are anything but objective. They appear to be based on selective pieces of information that help bolster whatever narrative he is attempting to set forth on a given day. And, rather than being free from political considerations, they are inextricably tethered to politics.

It is unfortunate that Trump is not likely to end his assault on the intelligence community anytime soon. Attacking those who disagree with him appears his only play. Nor should we expect him to suddenly shift his decision-making process to one grounded in humility rather than hubris.

However, we can find comfort knowing our national security professionals will continue to toil away without regard to politics as they provide the best possible intelligence available. Trump may not accept their conclusions -- which is his right -- but at least we can rest assured that no amount of stinging criticism from their commander in chief will dissuade them from strictly adhering to what is true.

Hi: 95° Lo: 70°
Feels Like: 98°
More Weather
Today will be another warm and sunny day with highs back in the low to mid 90s. The heat index will be slightly higher today due to the increased humidity. Temperatures will start to rapidly warm on Thursday and Friday with highs in the upper 90s. Heat index values both days will likely be near or at the triple digits. Rain chances will start to increase Friday night into the weekend as a cold front approaches our area. Temperatures will cool into the lower 90s for the weekend with highs back in the 80s for the beginning of next week.