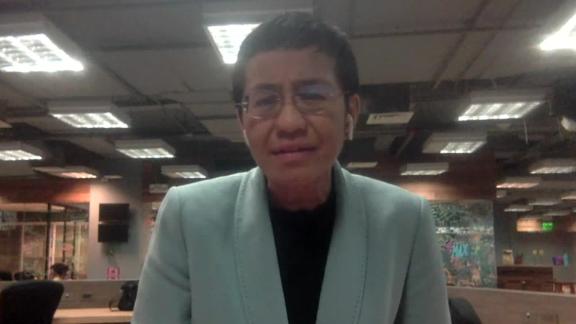 Award-winning Philippines journalist Maria Ressa has told CNN that her arrest on "cyber libel" charges is an example of how the law is being "weaponized" against critics of the country's President.

Ressa was released on bail Thursday after her lawyer paid the 100,000 Philippines peso bail ($1,915) fee after she spent the night in detention.

"The only thing I can think of is that the government wants me to feel its power," she said, adding that she felt her rights had been violated.

The co-founder and editor of online news outlet Rappler -- which has gained prominence for its unflinching coverage of President Rodrigo Duterte and his brutal war on drugs -- was arrested Wednesday at the Manila newsroom shortly after 5pm.

Ressa was charged with a lawsuit relating to a story written in 2012, which alleged that businessman Wilfredo Keng had links to illegal drugs and human trafficking. However, the article was published by Rappler two years before the new cyber libel laws came into effect in the Philippines.

"Constitutionally you can't have a law go retroactively," said Ressa, a 2018 Time Person of the year.

"I'm not a critic, I'm a journalist. I'm doing my job holding the government to account."

On her release, Ressa -- who was already out on bail following tax evasion charges filed against her last November -- made an impassioned speech about freedom of the press, calling her case an "abuse of power."

"The message that the government is sending is very clear: Be silent or you're next," said Ressa. "So I'm saying, and I'm appealing to you, not to be silent.

The National Bureau of Investigation ruled in January that because the report preceded the law, Ressa could not be charged. But that judgment was later overturned by the Department of Justice on the grounds the article was updated in February 2014.

JJ Disini, one of Ressa's lawyers, called the charges "politically motivated" and said that any updates made to the offending article in 2014 were "merely a punctuation change."

"If the libel had been committed way back in 2012, a change in punctuation couldn't have republished that libel," Disini added.

Rappler's extensive reporting on the Philippines under President Duterte has made the site -- and its journalists -- targets of his supporters.

Ressa has been indicted multiple times on libel and tax evasion charges that critics have described as politically motivated and designed to silence independent media in the Southeast Asian country.

Media advocates have criticized Ressa's arrest, arguing that the time gap between the article's purported alteration and her arrest indicated a political element.

"You have to wonder why is it that the person that is named in that article waited five years to file any charges," said Steven Butler, the Asia program coordinator for the Committee to Protect Journalists.

"Initially, the Philippine government decided they were not going to press charges, and then they changed their mind. The whole thing just frankly smells. It just looks like a political hack job to intimidate the press."

The National Union of Journalists of the Philippines said the arrest was "clearly a desperate move of the government to suppress the media" and dissent from the government.

Antonio Trillanes, a Philippines senator and Duterte critic who has also been arrested by the administration's Department of Justice, tweeted a short statement in support of Ressa.

"This move unmasks his despotic regime and his fear of accountability," the post read. "We must unite and stand for press freedom in these trying times, as Duterte systematically destroys our democracy."

The legal case against Ressa comes at a time when press freedoms are being challenged in the Philippines and around the world.

In 2018, Ressa was named among a group of journalists crowned Time magazine's Person of the Year.

Others in the group included Jamal Khashoggi, the Washington Post contributor killed in the Saudi Arabian consulate in Istanbul in October, and Wa Lone and Kyaw Soe Oo, two Reuters journalists arrested a year ago in Myanmar while investigating the mass killings of Rohingya Muslims.

Hi: 22° Lo: 5°
Feels Like: 3°
More Weather
On Saturday we are seeing more cold air across the area as a very strong cold front has made its way into the area bring very strong winds and cold temperatures. The cold air will stay with us on Sunday as daytime highs will only manage to stay in the lower 20's. We will stay on the cold side for the first part of the work week as we see another blast of cold air heads into the area.