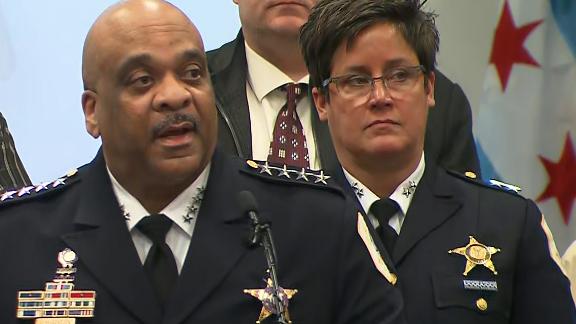 Chicago police announce the arrest of "Empire" star Jussie Smollett, stating the actor staged an attack to advance his career. The actor has denied playing a role in his attack, according to his attorneys.

Jussie Smollett paid two brothers $3,500 to stage an attack on him last month, taking "advantage of the pain and anger of racism to promote his career," Chicago Police Superintendent Eddie Johnson alleged Thursday.

The revelations necessary to charge Smollett came during the 47th hour of a 48-hour holding period for the brothers, who eventually confessed to the alleged plot, Johnson said. Had they waited another hour, the superintendent said, authorities would have been forced to release them.

"We just didn't have the total package to support that it was a hoax," he said. "This investigation didn't turn in the direction of Mr. Smollett being a defendant until the 47th hour that we had those two individuals in custody."

The "Empire" actor was arrested Thursday morning on suspicion of filing a false report about the January 29 incident and appeared in court in the afternoon. He paid a bond later and was released.

With his family members standing throughout the proceeding, Smollett wore the same puffer jacket he wore in his police mugshot. He shook his head and closed his eyes as prosecutors outlined their case against him: that the actor directed the brothers on what to say and do -- including uttering a racial slur, employing a noose and making a reference to "Make America Great Again."

Smollett texted one of the brothers, his friend Abimbola Osundairo, on January 25 and said, "Might need your help on the low. You around to talk face to face?" prosecutors alleged.

After laying out the plan and rehearsing it, prosecutors says, Smollett then gave Abimbola Osundairo and his brother, Olabinjo, a $100 bill to buy clothing and rope for a noose, prosecutors allege. He also instructed them not to bring their mobile phones to the attack, according to prosecutors.

A statement released Thursday night on behalf of the actor said the bail hearing was an "organized law enforcement spectacle that has no place in the American legal system."

Smollett is due back in court on March 14.

Smollett spoke in court only to confirm his name to the judge. His defense team told the court that Smollett was not a flight risk and cited his philanthropic work in making his case for bail. The judge granted a $100,000 bail, and Smollett paid a $10,000 bond. He was ordered to give up his passport and will remain under supervision until his case is adjudicated.

Smollett faces a felony charge of disorderly conduct for falsely claiming he was attacked by two men on January 29 in Chicago, police say.

The attackers yelled racist and homophobic slurs, tied a rope around his neck and poured an unknown substance on him, Smollett alleged.

The attack took place but was staged, Johnson said. The brothers punched Smollett a little, wearing gloves, according to Johnson.

"As far as we can tell, the scratching and bruising that you saw on his face were most likely self-inflicted," said Johnson.

Investigators believe Smollett staged the attack "because he was dissatisfied with his salary," Johnson said, citing information that the brothers gave to police.

Police initially treated the attack as a hate crime and were able to track down the men, in part, through cabs and rideshares that they took after the attack, Cmdr. Edward Wodnicki told reporters. They learned the men were in Nigeria.

Investigators met the brothers at customs when they returned to the country, Wodnicki said. Phone records indicate Smollett talked to the brothers about an hour before the alleged attack, an hour afterward and after they had left the country, authorities say.

According to Johnson, Olabinjo and Abimbola Osundairo asked for an attorney once in custody. After their lawyer explained to police that "something smelled fishy," the men told officers that Smollett, who is black and gay, first "attempted to gain attention by sending a false letter that relied on racial, homophobic and political language. When that didn't work, Smollett paid $3,500 to stage this attack," the police superintendent said.

Seven days before the alleged attack, a letter was sent to the Chicago set of "Empire." It contained white powder and a drawing of a "stick figure hanging from a tree," police have said.

Authorities determined the powder to be aspirin, police spokesman Anthony Guglielmi said. According to prosecutors, Smollett told Abimbola Osundairo that he was disappointed in the "Empire" team's reaction to the letter.

"There was never a thought in their mind that we would be able to track them down," he said.

After cooperating with police, the Osundairo brothers were released without being charged last week and went before a grand jury Tuesday, Johnson said.

At one point, Smollett's legal team asked that the grand jury proceeding be postponed so he could provide new details, but "essentially they gave us no new information," Wodnicki said.

The grand jury heard the evidence, and on Wednesday, police said, the Cook County State's Attorney's Office approved a felony disorderly conduct charge against the actor.

Under Illinois law, filing a false police report is disorderly conduct and punishable by one to three years in prison.

During Thursday's news conference, Johnson repeatedly chastised the media for devoting more attention to the Smollett case than to other alleged victims of violence in the city.

"I am offended by what's happened and I'm also angry," Johnson said. "Bogus police reports cause real harm. They do harm to every legitimate victim."

The superintendent said, however, that Smollett was given no more attention than any other alleged crime victim, but he lamented that resources devoted to the Smollett investigation could have been deployed elsewhere.

In the weeks since the alleged attack, there have been numerous twists in the narrative, transforming Smollett from victim to suspect. Smollett has stood by his initial claims that he was attacked. Celebrities and politicians lent their fervent support, but there were doubters. The backlash grew louder as social media users questioned the actor's claims after police said they could not find video of the incident from surveillance cameras in the area.

As details emerged, police said they wanted to conduct a followup interview with the actor based on "some developments."

They did not elaborate, but surveillance video from a beauty supply store captured the day before the assault, appears to show the brothers purchasing a ski mask, sunglasses, a red hat and other items.

The two are no longer suspects, Chicago police say. The brothers' attorney, Gloria Schmidt, told reporters Wednesday that her clients had not accepted a plea deal.

"You don't need immunity when you have the truth," she said.

Asked why Smollett chose the brothers, who prosecutors say both appeared as extras on "Empire," Johnson said it was probably because he had a previous relationship with them and "knew that he needed somebody with some bulk."

Selfies posted on Instagram showed the muscular brothers with their shirts off, flexing, and prosecutors allege that Abimbola Osundairo, with whom Smollett has been friends since 2017, had previously worked out with, socialized with and provided recreational drugs for Smollett.

Smollett, who plays a gay character on the Fox drama "Empire," told detectives two men attacked him near the lower entrance of a Loews hotel in Chicago, police said. The men yelled, " 'Empire' fa***t" and " 'Empire' n***er,' " while striking him, police were told.

The actor also confirmed reports that one of the men shouted, "This is MAGA country," a reference to President Donald Trump's "Make America Great Again" slogan, police said.

Prosecutors allege Smollett directed the brothers to utter the remarks and epithets while attacking him. The attack was supposed to go down at 10 p.m. on January 28, but was postponed until 2 the next morning because Smollett's flight was delayed, prosecutors say.

Smollett took the brothers to the site where he wanted the incident to occur on January 27 and pointed out a surveillance camera on the corner he thought would record the attack, prosecutors say. They say the plan was changed so bleach would be used during the incident instead of gasoline.

After the brothers were released from custody, Smollett's attorneys maintained their client was the victim of a hate crime and said he was cooperating with police.

"Jussie Smollett is angered and devastated by recent reports that the perpetrators are individuals he is familiar with," their statement said. "He has now been further victimized by claims attributed to these alleged perpetrators that Jussie played a role in his own attack."

The company behind "Empire," 20th Century Fox Television, has previously backed the actor. After Thursday's news conference, it issued a statement saying, "We understand the seriousness of this matter and we respect the legal process. We are evaluating the situation and we are considering our options."

Hi: 59° Lo: 33°
Feels Like: 44°
More Weather
Tomorrow we will see lots of sunshine as a area of high pressure continues to move into northeast Kansas and northwest Missouri. The colder temperatures will start to move away from the area on Saturday. Then over the weekend we will warm up dramatically with highs in the 50s and watch for our next chance for rain on Sunday.

Family of Arial Starcher speaks out