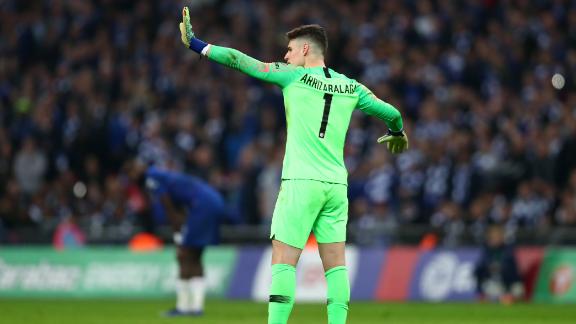 Alex Thomas chats with Mark Bolton and Carl Anka about Chelsea keeper Kepa Arrizabalaga and his decision to ignore Maurizio Sarri in the League Cup final.

Maurizio Sarri tore furiously at his jacket, gesticulating wildly as he stormed down the Wembley tunnel.

The Chelsea manager, already fighting for survival after just seven months in the job, had just been publicly humiliated in the biggest match of his career by an act of insubordination from one of his youngest players.

Having already gone down twice with cramp during extra time of the League Cup final, Kepa Arrizabalaga -- Chelsea's 24-year-old goalkeeper and the most expensive stopper in the world -- was set to be substituted and replaced by Willy Caballero.

Upon seeing his number held up by the fourth official, Kepa -- a $92.8 million summer signing from Athletic Bilbao -- began defiantly wagging his finger towards Sarri on the touchline, refusing to leave the pitch.

What followed was an ugly scene that overshadowed what was a markedly improved Chelsea performance and a battle of wills, embarrassingly lost by a manager in the first major cup final of his career.

Substitute Caballero, who saved three penalties for Sunday's opponents Manchester City against Liverpool in the 2016 final, stood confused with his arms outstretched in the direction of his embattled boss.

READ: Liverpool draw with Manchester United in Premier League but was it two points dropped?

A visibly livid Sarri, who eventually backed down after a conversation with referee Jonathan Moss, had to be held back from confronting Kepa at full time by his defender Antonio Rudiger.

The ugly standoff, which few can ever remember seeing previously in the sport, serves as yet more fuel for the accusations of "player power" in the Chelsea dressing room, which reportedly forced Antonio Conte and Jose Mourinho out of Stamford Bridge.

For Sarri, now publicly undermined following weeks of speculation surrounding his future, the question is: What next?

Does the Italian allow Kepa's act of disrespect to slide and select the goalkeeper for Wednesday's crucial Premier League derby against Tottenham?

In the post-match press conference, it seemed this was the route Sarri had decided to go down -- at least publicly.

"It was a big misunderstanding," he told reporters. "I understood he had cramp so I didn't want the goalkeeper to go to penalties in that physical condition. I only realized the situation after three or four minutes when the doctor came to the bench.

"In the meantime I wanted Caballero on the pitch, and the keeper [Kepa] only wanted me to know he was in condition to go to penalties, so it was a big misunderstanding.

"Kepa was right, even if the way he conducted himself was wrong. Mentally he was right, he was able to go to penalties, but I only realized everything when the doctor was able to come to the bench, not before. I was really angry.

"I want to talk with him because he needs to understand that with a misunderstanding we can get in trouble, especially with you (the media). So I think I only have to explain the situation to Kepa but without any other problem."

Kepa, at least this time, went along with his manager and claimed the altercation was nothing more than confusion between the pair.

"First of all, I have to say it was misunderstood," said the goalkeeper. "In no moment was it my intention to disobey, or anything like that with the boss.

"Just that it was misunderstood, because I had been attended to by the medics twice, and he thought that I wasn't in condition to continue. It was two or three minutes of confusion until the medics got to the bench, and they explained everything well.

"I know if you see it from outside, I don't know how it went out, it is not the best image. I have spoken with the boss. I think it was misunderstood. I understand that on television, on social media, they're talking about this but I am here to explain it, to say that it wasn't my intention to go against the manager."

Their version of events didn't wash with those who had witnessed the standoff and whether or not Sarri will deal with Kepa differently in private is another question, but the blame also lies at the door of Chelsea's senior players who refused to stand up for their manager.

Captain Cesar Azpilicueta was nowhere to be seen, while David Luiz appeared to be having a mild-mannered private chat with the goalkeeper over the impasse.

Another option Sarri has, and one which many onlookers believe he should take, would be to leave Kepa on the bench or in the reserves for the foreseeable future.

However, for a manager whose job is on a knife edge following several abysmal performances, it seems unlikely Sarri holds the power to come out on top against the club's most valuable asset.

Coupled with Chelsea's inability to sign a potential replacement for two transfer windows following a FIFA ban, Kepa's future at the club appears to be safe.

Sarri's fury will have been compounded by the incident overshadowing arguably one of the team's best performances during his time in charge.

After all, he had suffered a resounding 6-0 defeat at the hands of Pep Guardiola's City just two weeks earlier but in Sunday's final Chelsea had shown glimpses of Sarri's blueprint, the reason he was headhunted from Napoli.

The team defended resolutely as a unit and there were neat combinations which allowed Chelsea to play out effectively from the back, bypassing City's high press.

Jorginho recycled the ball efficiently in midfield, as he did for Sarri when the pair were in Naples, while N'Golo Kante was at times a devastating outlet for Chelsea to transition from defense to attack.

In truth, few would have argued had Chelsea come out on top after 120 minutes but now few will remember the match for anything other than Kepa's public display of disobedience.

The Spaniard even had the chance to turn himself into a hero in the subsequent penalty shootout, but only infuriated his fans more by allowing Sergio Aguero's weak penalty to inexplicably squirm under his hands.

He did go some way to making amends a few minutes later, saving Leroy Sane's effort, but misses from Luiz and Jorginho proved costly -- both for Chelsea and Kepa's reputation.

It seems a shame that for 120 minutes the Chelsea players put in a performance which may well have saved Sarri's job, only for Kepa's public mutiny to put his coach's position in yet more danger.

Hi: 76° Lo: 52°
Feels Like: 78°
More Weather
Temperatures will be cooler on Friday making it a great end to the week across northwest Missouri and northeast Kansas. Temperatures will warm into the mid to upper 70s and we will have an increase in moisture that could bring some rain Saturday afternoon.