The incredible rise of Atlanta United 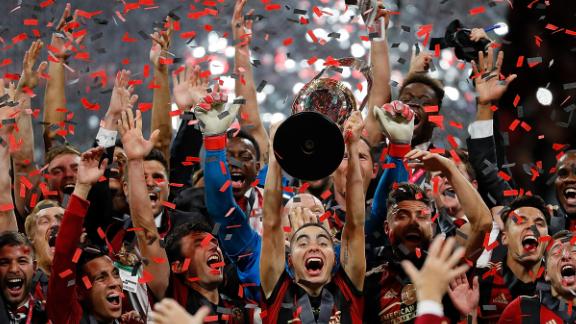 Atlanta United FC has witnessed an incredible rise. Joining the MLS in 2017, it won its first MLS Cup in its second season and the future seems bright.

When some of world football's biggest stars talk, you pay attention.

On the eve of the 24th Major League Soccer season, a storyline which would have beggared belief just two years ago -- namely, what did you make of Atlanta United winning MLS Cup? -- is not only relevant but a question that simply had to be put to the star names plying their trade in North America.

In 2014, the year Atlanta United was awarded a place at the top table of America soccer -- the inaugural season was in 2017 -- some sneered that the sport could never truly take off in a town where the other kind of football would forever dominate.

And while the likes of the Atlanta Falcons and the state of Georgia's college football teams are of course a big deal, the new kids on the block have taken to life in MLS as if they had been part of the league from day one.

A playoff appearance in Atlanta United's first season arguably confounded expectations, but the early exit simply solidified the passion from a fanatical fanbase, who wanted more from a side who would play to more than 70,000 of these soccer savvy supporters, when the magnificent Mercedes-Benz Stadium was open to its fullest capacity. Attendance records have fallen, as have many of the opposing teams.

The rest is indeed recent history. The Five Stripes, in just their second season, seemingly swept all before them during the 2018 campaign.

And while they fell just short of locking up the Supporters' Shield, they regrouped to romp through the playoffs and become deserving winners of MLS Cup, defeating the Portland Timbers in front of 73,019 fans, the vast majority of whom celebrated the city's first sporting success since the Atlanta Braves won baseball's World Series in 1995, which occurred before some of this team had even been born.

It was not uncommon for his goals to be set up by Paraguay's Miguel Almiron, who broke a record himself during the close season, moving to the English Premier League, becoming Newcastle United's highest transfer fee in history.

Ahead of the new season, CNN Sport caught up with a handful of Atlanta's biggest rivals, keen to find out what they made of the newly-minted champs' success story. Alphabetically, these A-listers stacked up as Jozy Altidore, Zlatan Ibrahimovic, Wayne Rooney, Bastian Schweinsteiger and Bradley Wright-Phillips.

Between them, these players have lifted trophies of the highest magnitude that the beautiful game has to offer: The likes of World Cups, Champions Leagues and Europe's major domestic titles.

But they have also come up against this phenomenon of a team in Atlanta United, and were more than happy to reflect, discuss, and celebrate quite possibly the biggest -- or at least most recent -- success story in American sport.

Watch the video at the top of the page to see more about Atlanta United's incredible rise.

Hi: 76° Lo: 52°
Feels Like: 67°
More Weather
Temperatures will be cooler on Friday making it a great end to the week across northwest Missouri and northeast Kansas. Temperatures will warm into the mid to upper 70s and we will have an increase in moisture that could bring some rain Saturday afternoon.