What we learned from the R. Kelly interview Part 1 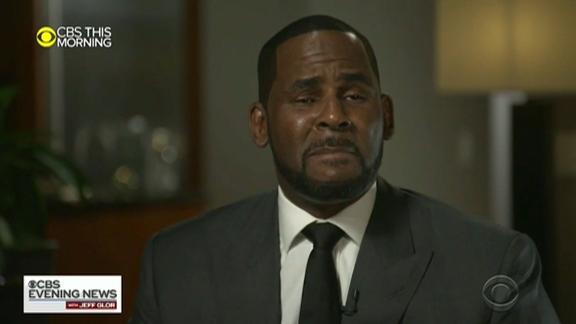 During an interview with Gayle King on "CBS This Morning," R. Kelly denies the allegations of aggravated criminal sexual abuse against him.

The first portion of Gayle King's exclusive interview with singer R. Kelly aired on "CBS This Morning" Wednesday and it was explosive.

The singer, who was indicted last month on 10 counts of aggravated criminal sexual abuse -- a Class 2 felony -- involving four alleged victims, cried, shouted, jumped up from his seat and had to be calmed down by his publicist.

Kelly has strongly denied the charges. The next hearing in the case is later this month.

Here's some of what we learned from the first part of the interview:

Kelly has insisted he is innocent.

After the airing of the docuseries "Surviving R. Kelly" in January, which documented the stories of several women and their families who alleged that the singer sexually abused them, Kelly showed up at a Chicago nightclub insisting "I don't give a f*** what's going on tonight."

Kelly maintained that attitude at times during his interview with King.

He said he's tired of all the lies, such as people saying he's "trying to rescue someone that doesn't need rescuing because they're not in my house" and those who claim he is "handcuffing people, starving people." He also denied that he has a "harem" and a "cult" of women under his control.

The singer dismissed it all as nonsense, especially given all the attention he has received in the past regarding his interactions with girls and women.

He called on people to use "common sense" when it came to the allegations against him.

"How stupid would it be for me, with my crazy past and what I've been through," Kelly said.

"Oh, right now I just think I need to be a monster, hold girls against their will, chain them up in my basement, and don't let them eat, don't let them out!" he said sarcastically.

He says it's all not true

Kelly became visibly emotional during the interview, at one point bursting into tears and leaping from his chair.

"Stop it, y'all quit playing," Kelly exclaimed. "I didn't do this stuff! This is not me I'm fighting for my f***ing life! Y'all killing me with this s**t!"

"You killing me man," he yelled as he pointed into the camera. "This is not about music!!"

King paused the interview to allow Kelly to regain his composure and his publicist helped him calm down.

But the singer said he hoped the camera stayed on and continued to film him as he continued to insist, "This is not true. It doesn't even make sense."

Kelly also apologized for his outburst.

"The reason I'm emotional -- and I apologize for that -- is because it's the first time I was able to say something," he said. I've said nothing."

He believes people are 'conspiring against him'

Kelly said he needed someone to "help me not have such a big heart" because people "betray me and I keep forgiving them."

King pointed out to Kelly that he sounded like he was trying to play the victim.

She told her colleagues back in the studio that Kelly is convinced that "everyone is trying to do a book deal, or trying to do a movie and really people are conspiring against him."

The parents of Joycelyn Savage, 23, and Azriel Clary, 21, appeared in Lifetime's "Surviving R. Kelly" docuseries, alleging that Kelly had brainwashed their daughters.

In the case of Clary, her parents have alleged the singer began a sexual relationship with her in 2015 when she was 17 years old.

Kelly denied that in his interview with King and said he loves both of the women. "It's like they're my girlfriends. It's like, you know, we have a relationship. It's real."

"I've known guys all my life that have five or six women, ok, so don't go there on me," Kelly said.

The 52-year-old singer said he doesn't view it as liking women who are much younger than him.

He said he simply views it as he looks for women who are "legal."

As for him, Kelly said "I'm an older man that loves all women."

The star said both Savage and Clary's parents were instrumental in him meeting their children. Both sets of parents have previously said that the interaction started with the hopes that the young women could be his musical protégés.

Kelly accused them of selling their daughters to him.

"What kind of father, what kind of mother would sell their daughter to a man?" Kelly asked. "How come it was okay for them to see me until they weren't getting no money from me?"

King asked him if he means that the parents handed their daughters over to him and Kelly said, "absolutely."

Michael Avenatti, the attorney who represents Alice and Angelo Clary, Azriel's parents, released the following statement Wednesday on behalf of his clients on Twitter:

"We have never received a penny from R. Kelly. We have never asked R. Kelly for money. And we never 'sold' our daughter to him or anyone else. R. Kelly is a desperate liar and serial abuser of young girls who should die in prison. All of the victims and parents cannot be lying."

Attorney Gerald Griggs, who represents the Savage family, provided physical copies of receipts for flights and expenses to show the family never received money from Kelly.

The two young women were seen in a clip Wednesday during King's interview with Kelly.

In the video, Savage is shown attempting to console a tearful Clary.

"I'm crying because you guys don't know the truth. You guys are believing this f***ing façade that our parents are saying," Clary said tearfully. "This is all f***ing lies for money and if you can't see that, you are ignorant and you're stupid."

He keeps a Christmas tree up all year

King conducted the interview at Kelly's apartment in Chicago's Trump Tower. In one shot, the pair was seen sitting in front of a Christmas tree, which King said Kelly keeps up all year in honor of his late mother, who died in 1993. It was her favorite holiday.

King also noted that it was "about 90 degrees" in the apartment, as Kelly said he was resting his voice in preparation to sing later.

"CBS This Morning" plans to roll out more of the interview Thursday and Friday.

Hi: 78° Lo: 52°
Feels Like: 67°
More Weather
The end of the week we will see some sunshine return to the area and cooler temperatures will return on Friday and Saturday. Temperatures will be at or below normal to end the week.

No mass testing will be conducted at WRDCC