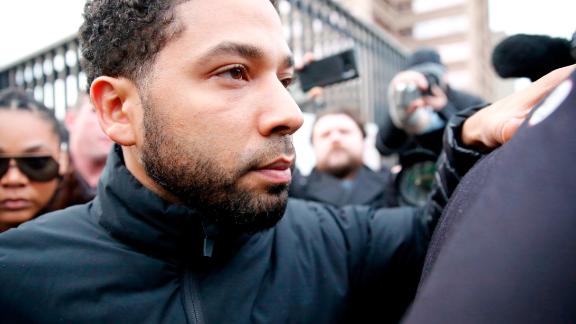 Actor Jussie Smollett has been indicted on 16 felony counts of disorderly conduct by a Cook County Grand Jury.

"Empire" actor Jussie Smollett, who authorities say filed false reports of a crime, has been indicted on 16 felony counts by a Cook County grand jury.

The indictment charges Smollett with 16 counts of disorderly conduct.

Smollett's attorneys said they have no statement at this time. He remains out on bail pending an arraignment Thursday.

Smollett reported to police in January that he had been attacked in Chicago in an incident that ended with a noose around his neck. Police initially investigated the case as a possible hate crime.

After police detained two brothers who were "persons of interest" in mid-February, police sources revealed that authorities suspected Smollett knew the men and allegedly had paid them $3,500 to stage the attack. The men were released without being charged.

Smollett has denied any involvement in orchestrating an attack.

Smollett was charged in February with felony disorderly conduct. The judge granted a $100,000 bail, and Smollett paid a $10,000 bond. He was ordered to give up his passport and will remain under supervision until his case is adjudicated.

"Like any other citizen, Mr. Smollett enjoys the presumption of innocence, particularly when there has been an investigation like this one where information, both true and false, has been repeatedly leaked. Given these circumstances, we intend to conduct a thorough investigation and to mount an aggressive defense," Smollett's attorneys said in February.

The producers behind "Empire" decided to remove Smollett's character, Jamal, from the final two episodes of the season. The decision was made to "avoid further disruption on set," producers said.

A spokesperson for Fox said Friday the company has no comment.

Hi: 78° Lo: 52°
Feels Like: 64°
More Weather
The end of the week we will see some sunshine return to the area and cooler temperatures will return on Friday and Saturday. Temperatures will be at or below normal to end the week.