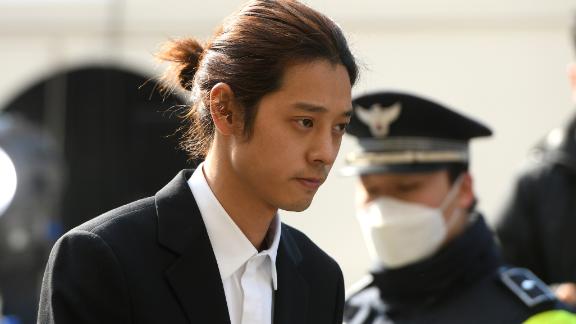 Several high-profile K-Pop stars have been named as being members of an online group chat that shared sexually explicit videos of women filmed without their knowledge or consent, South Korean police confirmed.

Several high-profile K-Pop stars have been named as being members of an online group chat that shared sexually explicit videos of women filmed without their knowledge or consent, South Korean police confirmed.

The explosive allegations are the latest in a growing sex scandal that threatens to destabilize South Korea's multibillion-dollar entertainment industry.

Seungri, 28 made headlines on Tuesday after it emerged he was being investigated on suspicion of violating the country's prostitution law.

Outside the police station Thursday, Seungri paused in front of the reporters and said: "I lower my head and offer apology to the people and people nearby who were hurt and suffered ... I will fully engage in investigation with truthful answers."

Neither Seungri or his label, YG Entertainment, responded to CNN's request for comment. But YG issued a statement in South Korea's largest newspaper Chosun, saying that they have accepted the singer's request to terminate his contract with them.

"Seungri is said to be part of various allegations and controversies has appeared repeatedly. We bow deeply to offer our apology for causing disturbance to many people, including our fans," the statement said.

The singer has not officially commented on the allegations.

The scandal has called the squeaky-clean image required of South Korean entertainers into question.

K-Pop stars are expected to conform to notoriously high standards of conduct, both from their management and fans. Their labels impose restrictions on who and how publicly they can date, what they wear and how they behave in public.

Dropped by their labels

Jung, 30, who starred in the hit Korean TV show "2 Days & 1 Night", also appeared at the Seoul Metropolitan Police Agency for questioning on Thursday.

He is being investigated on suspicion of illegally filming women while engaging in sexual acts with them and illegally distributing the videos over social media, police said.

In addition, police told CNN that police may have helped to suppress evidence in a 2016 investigation of illegal filming involving Jung.

"Not only the allegation on police collusion, but we will conduct a strong internal investigation, and according to the result, we will take a stern measure regardless of their rank," South Korea's National Police Agency Chief Min Gap-ryong, told lawmakers on Thursday.

In light of the allegations, Jung's management company MakeUS Entertainment has dropped him from their label, saying in a statement that, "Our company had judged that we can no longer continue the contract with Jung Joon-young considering the current situation," Chosun reported.

CNN has not been able to reach Jung for comment, but in a letter published in local South Korean media Wednesday, he admitted to secretly filming women without their consent and sharing the footage.

"I acknowledge all my guilt in relation to the content of the talks about me. I have filmed women without consent and distributed it over social media and acted without much guilt during those actions," he said according to Korea's largest newspaper, Chosun.

Jung said he apologizes "with my knees on the ground" to the women in the video, "who are now facing the ugly truth due to the revelation of this scandal, and to all those who will feel disappointment and anger at such deplorable action," he said.

The singer-songwriter, who rose to fame after starring in the Korean equivalent of "American Idol" -- "Superstar K" -- said he would resign from the entertainment industry and "fully cooperate" with the police investigation.

Jung has since been dropped from the show "2 Days & 1 Night" and his appearance will be edited out of the two episodes which had already been filmed, according to the show's producers.

"The producers have considered the seriousness of the situation and have decided to suspend appearance of Jung Joon-young on the show," an official statement posted on the website of public broadcaster KBS website read.

Little is known about Choi's alleged involvement in the group chat, though he has also been questioned by police. CNN has reached out to his management, FNC entertainment, for comment.

In a statement to Chosun, FNC said that Choi "feels deep shame for his past wrongful actions and is deeply regretting how he had disappointed many people, also how he had damaged his team through his actions. Until all the investigation concludes, he will comprehensively suspend planned solo activity and activity as a member of F.T. Island. "

Meanwhile, a fourth K-Pop star, Yong Jun-hyung from the band Highlight, said he has spoken to police as part of a witness investigation after admitting to watching a video allegedly sent him over an online chat.

A statement from his agency, Around Us Entertainment, on Thursday said that Yong "had seen an illegal video that was shared through the 1:1 chat and exchanged inappropriate conversations about it," the statement said.

Yong will leave the group Highlight "after consultation with the company in order to avoid tarnishing the group's image and prevent secondary damages."

Posting to his official Instagram page on Thursday, Yong said that he "didn't think this was a crime" but denied committing a criminal act such as filming or sharing the footage.

"I didn't take it seriously, and I was a bystander who turned a blind eye to this serious problem that many different victims could arise from due to my such act," Yong said.

Police began investigating Jung during a separate probe into Seungri, who is accused of procuring women for prostitution.

On Tuesday, Seungri, quit the entertainment industry following weeks of scandals that have dogged a nightclub he was a board member of.

The Burning Sun nightclub in Seoul faces allegations faces allegations of bribery, violence against customers, securing prostitutes for VIPs, rape, drug trafficking and drug use, according to the Seoul Metropolitan Police. Numerous women have come forward with claims of being assaulted or drugged at the club, which the authorities have been investigating for two months.

Fresh accusations around the Burning Sun scandal have been appearing in the Korean press almost every day.

The club has not responded to a request for comment but last month posted a statement on social media saying it was "actively cooperating" with the police.

Police Chief Min said that he would expand the investigation "not only Gangnam's nightclubs but similar businesses in the rest of the country to root out corruptions including drugs, sexual violence, illegal filming and distribution, police corruption."

Jenna Gibson, a Korea expert at the University of Chicago, said that if the allegations against Seungri and Burning Sun were true, "this level of scandal goes beyond anything we've seen in recent memory" in K-pop.