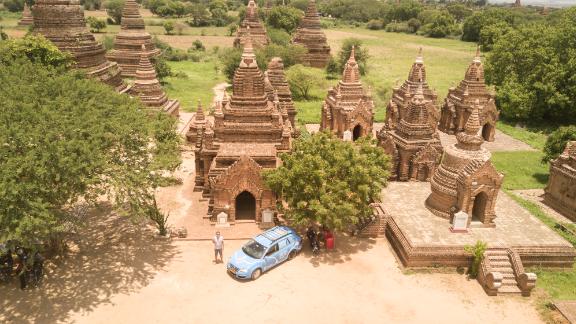 Wiebe Wakker left his Dutch home in March 2016 with no money in his pocket on his way to Australia. The only thing he had? His electric car.

For three years and 90,000 kilometers and counting, he's traveled the world powered both by electricity and strangers' kindness.

Keen to spread a zero-carbon future message, Dutchman Wiebe Wakker effectively left home with empty pockets, the €20,000 ($22,618) he has spent since setting off in March 2016 going entirely on car repairs and shipping logistics, and earned from working on his travels.

The rest enabling his electric Volkswagen -- nicknamed "The Blue Bandit" -- has come from the generosity of strangers from Norway to Iran and Myanamar to the United Arab Emirates on his journey to a finish point in Sydney next month.

Wakker says it is impossible to estimate how much the trip might have cost if paying his own way, with total strangers having slashed that bill with both free accommodation as well as free meals as he drove towards Australia.

READ: Is this the most exciting championship in the world?

His only error, he says, has been in underestimating mankind.

"That was my biggest failure because I've had so many people offer me help with this trip. I've traveled through areas said to be unsafe like the Middle East and India, but everywhere there was the kindness of local people."

His Plug Me In Project essentially involved people plotting his course on his website and offering three ways of helping: a meal, a place to stay and somewhere to charge his vehicle.

Initially, he had planned to cover the route of a journey -- first plotted as an adventurous backpacker in Australia 10 years previously -- in 18 months only for it to become a "more opportunistic route."

He let his backers determine that route, which meant -- among other things -- taking him across the very circuitous route of going via the tip of northern Norway to get across Europe.

"When I started, I had no idea of the route," he said, "but I know I never thought I'd go for this long. But so many people offered me places to stay, organized something and so I thought 'I can't brush this off and go as quickly as possible.'

"So, I've grasped it as a once-in-a-lifetime opportunity to enjoy to the maximum."

As he eats up the final kilometers of the road, there is only partial celebration in approaching his finish point. "There's a bit of sadness as well actually as it's nearly finished and I'm still enjoying it. I thought when it ended I'd be exhausted or super hungry but it really has been an experience of a lifetime."

That is countered by the fact he is no longer driving an electric car without air conditioning -- the fuses on it went about a month ago -- as temperatures hit a high of 49 degrees Celsius in a particularly hot Australian summer. "I've had to have coffee beans in the car to help cancel out the smell," he says laughing.

Throughout the journey, he has driven where possible but sent the car by ship three times, and raised the money required by doing differing jobs along the way.

READ: Around the world in 80 days... with an eco twist

Unsurprisingly, there have been mishaps with the car at certain points. First in India, a broken spring was welded in place but it caused the rear tires to wear down so the car was no longer drivable, and then it short circuited and the charger exploded.

In Indonesia, the car got flooded and he could only repair it by flying out mechanics from his native Holland, but amazingly that €5,000 ($5,654) cost he raised by crowdfunding in the space of just 10 days.

A born traveler, Wakker returned from his earlier Australian adventure a decade ago and studied events management at university, capped off by a thesis in entrepreneurship.

From that was born the electric car idea, which took 18 months to get off the ground and was made possible with the help of a Dutch company called Bundles, which loaned him the car for the length of the trip.

"With it I wanted to prove the reliability of electric cars and what it's possible to cover," he said. "It's still going pretty good."

By his own admission, Wakker has not always been that green-minded but had that view shifted working for an events company, which got into environmentally clean projects including a dance floor at a music festival in which people produced the electricity for the festival by dancing.

READ: Why 2019 will be the year of the luxury electric car

"It showed that sustainability doesn't have to be boring but it can do cool stuff," he said.

As for the future, he wants to remain active in the field of sustainability but is aware he's likely to need a period of adjustment when he gets back home.

"I'm excited to go back after three years of traveling, and really looking forward to having a base, put clothes in a closet not a suitcase," he said. "It's a more stable life after this craziness. But what I'm doing has become a lifestyle so it could become a shock."

Hi: 30° Lo: 17°
Feels Like: 0°
More Weather
Thursday we will see lots of sunshine as a area of high pressure continues to move into northeast Kansas and northwest Missouri. The colder temperatures will be with us as highs will be in the lower 30s on Thursday. Then over the weekend we will warm up dramatically with highs in the 50s.