Why Lionel Messi is the world's best player 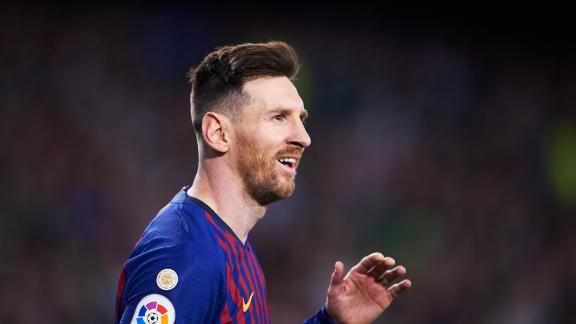 Leading sports scientist Simon Brundish crunches the numbers on Lionel Messi, explaining why the Barcelona forward is the best player in the world

Leading sports scientist Simon Brundish gives a knowing look when asked who is the best footballer in the world. "While he's alive, there's only Lionel Messi," Brundish says. "If you're saying anybody else is the best player in the world, Messi's had a broken leg for a year, or he's dead, or you're lying."

Given Messi is widely considered among the greatest players to ever play the game, that might not seem like too startling an insight. But Brundish has a set of statistics he believes sufficiently ends any debate on the matter.

"Currently Messi has a goal or assist every 48 minutes," Brundish says. "Bearing in mind that every game is almost 95 minutes long (when injury time is included) that's two almost every single game."

Few can come close to these feats -- although Cristiano Ronaldo has long had a comparable, and sometimes superior, goal scoring rate. More recently, the likes of Luis Suarez, Neymar, Kylian Mbappe and Mohamed Salah have also all excelled in scoring for their respective club and national teams.

Yet Brundish says the real supremacy of Messi lies not only in his goalscoring feats but also how highly he rates in a statistic known as xG-Build.

This metric awards points to every player involved in a goal except from the person who supplied the final pass (assist) and the goalscorer.

For example, if a goalkeeper started a move by passing to a defender, who then played the ball to winger before squaring for a striker to score, the goalkeeper and defender would score statistical points under the xG-Build system.

Given Messi's prodigious goal and assist rate, it would seem logical that his xG-build score would lag behind other players who have more of a role in the early stage build up to a goal given the spaces they usually occupy on the field.

But Brundish says that's not the case.

Combine all of those stats; Messi's goals, assists and xG-Build score and Brundish asks of the best player in the world debate: "Where is the argument?"

Is Messi the best player in the world? Tell us who's better on CNN Sports Facebook page.

Hi: 30° Lo: 17°
Feels Like: 0°
More Weather
Thursday we will see lots of sunshine as a area of high pressure continues to move into northeast Kansas and northwest Missouri. The colder temperatures will be with us as highs will be in the lower 30s on Thursday. Then over the weekend we will warm up dramatically with highs in the 50s.