'This Is Us' season three finale reveals the identity of 'her' 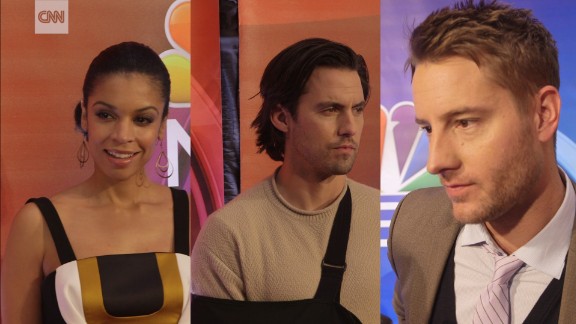 'This Is Us' stars Milo Ventimiglia, Susan Kelechi Watson, and Justin Hartley dish on how the show has affected them, plans for their characters, and what to expect from the "stressful" finale.

It's the moment "This Is Us" fans have been waiting for since the ending of Season 2: Who is 'her'?

The identity of this woman was finally revealed in the final seconds of the Season 3 finale on Tuesday night.

It's Rebecca Pearson, (Mandy Moore), but many years into the future and she appears to be on her deathbed.

Her children and their families appear to be gathering to say their goodbyes.

What we also learn is that Rebecca is not in the hospital, she is at her son, Kevin Pearson's (Justin Hartley) home. We also discover that Kevin has a son of his own but we don't know with who. Could it be that he and his longtime girlfriend, Sophie (Alexandra Breckenridge), got back together?

Earlier in the episode we find out that Kevin and Zoe Baker (Melanie Liburd) split because she is adamant about not wanting children.

A popular fan theory was that "her" was possibly Beth Pearson (Susan Kelechi Watson), since much of season three focused on her marital problems with her husband, Randall Pearson (Sterling K. Brown). But with a quick peck on the lips and a flash of her wedding ring during the flash forward, viewers' fears were quickly erased.

One unsettling moment came when Toby Damon (Chris Sullivan) arrived to Kevin's home alone, leaving some viewers wondering if he and his wife, Kate Pearson (Chrissy Metz), had possibly split. Earlier in the episode, they left the NICU with their newborn son Jack, who had been born 12 weeks early. During the flash forward we learn that Kate is on her way over with Jack -- so at least we know that despite his health problems from being born so premature he makes it past those touch and go moments.

But despite some resolve, there are still several unanswered questions: Where is Deja (Lyric Ross), Beth and Randall's foster child? What happened to Miguel? Who did Kevin have a child with? And what is going on with Kate and Toby?

A season four premiere date has not been announced.

Hi: 35° Lo: 24°
Feels Like: 28°
More Weather
Temperatures will be in the middle to upper 30s tomorrow. Once the fog clears, we will get to see the sun briefly before the another round of clouds build in during the evening. Highs will continue to rise through the week but will stay in the 40s for most of us. By the weekend highs will be in the 50s.