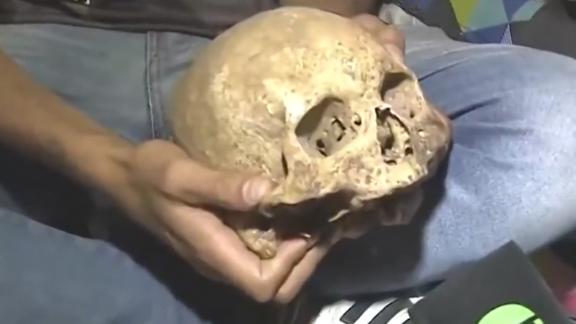 A fan of Argentine football club Racing dug up his grandfather's skull to celebrate winning the league title for the third time since 1966.

Having only won two top-flight titles since 1966, Sunday's draw against Tigre -- which secured a third first division crown this century -- was a big deal for Racing Club.

Tens of thousands of supporters took to the streets of Buenos Aires to commemorate the win, congregating at the city's obelisk monument -- a famous meeting point for fans celebrating their team winning the Argentine league title.

Such was the importance of the victory, in the case of one fan, not even death could stop him taking to the streets to celebrate.

Not wanting a single member of his family to miss out on the historic victory, lifelong Racing fan Gabriel Aranda exhumed his dead grandfather's skull and carried it around the streets of Buenos Aires to celebrate.

Speaking to a reporter -- who inexplicably tried to interview the skull with his microphone -- Aranda said his grandfather, Valentin Aguilera, would be feeling proud of his team winning the title.

Aranda explained to TNT Sports that he takes the skull out of its tomb for good luck every time Racing play.

Argentine football fans are known to be among the most passionate in the world, but Gabriel Aranda may have just raised the bar.