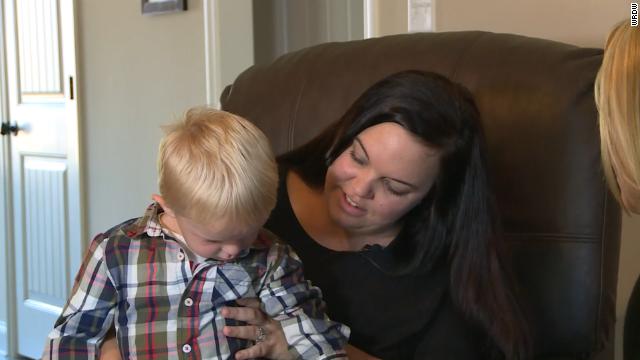 A pregnant mother was cited by police for disorderly conduct after her 3-year-old urinated in a parking lot on his way to the restroom.

As parents of toddlers know, nature doesn't always call at the most convenient time.

Brooke Johns was driving in Augusta, Georgia, when her 3-year-old son told her he was in urgent need of a bathroom. She pulled into a gas station parking lot, only to realize that they wouldn't make it to the restroom.

"He says, 'Momma, I'm about to pee in my pants!'" Johns told CNN affiliate WRDW.

Johns was 34 weeks pregnant and couldn't carry her son, Cohen, to the toilet. So she tried to cover her son up as best she could while he peed in the parking lot.

"He was peeing before his pants were even all the way down, so obviously he had to go," says the mom, who lives in Beech Island, South Carolina.

But law enforcement wasn't so sympathetic.

"She allowed her male child to urinate in the parking lot. I observed the male's genitals and the urination," the officer wrote on a copy of the ticket, obtained by WRDW. "Public restrooms are offered at the location."

The Richmond County Sheriff's Office told CNN on Monday that nobody was available to comment.

The mom, who is expecting a baby girl next month, plans to head to court April 30 to contest the citation, just days before her due date.

"Accidents happen. And (the officer) was like, 'Take him in the bathroom.' What if I would have ran in the bathroom and someone had been in there? What was I going to let him do? Pee on the floor of the gas station?" Johns said.

Hi: 32° Lo: 20°
Feels Like: 21°
More Weather
Temperatures will start to warm up on Saturday and Sunday with highs reaching into the upper 30's and lower 40's. The precipitation will stay out of the forecast until the middle part of next week.