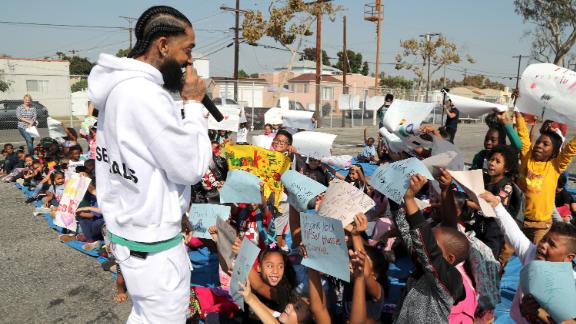 Former President Barack Obama paid tribute to Nipsey Hussle in a letter that was read at a memorial for the late musician and community activist.

Former President Barack Obama paid tribute to Nipsey Hussle in a letter that was read at a memorial for the late musician and community activist on Thursday.

Dear Friends and Family of Nipsey:

I'd never met Nipsey Hussle, but I'd heard some of his music through my daughters, and after his passing, I had the chance to learn more about his transformation and his community work.

While most folks look at the Crenshaw neighborhood where he grew up and see only gangs, bullets, and despair, Nipsey saw potential. He saw hope. He saw a community that, even through its flaws, taught him to always keep going. His choice to invest in that community rather than ignore it -- to build a skills training center and a coworking space in Crenshaw; to lift up the Eritrean-American community; to set an example for young people to follow -- is a legacy worth of celebration. I hope his memory inspires more good work in Crenshaw and communities like it.

Michelle and I send our sympathies to Lauren, Emani, Kross, and the entire Asghedom family and to all those who loved Nipsey.

Hi: 90° Lo: 70°
Feels Like: 86°
More Weather
A very warm and windy day across northwest Missouri and northeast Kansas on Wednesday. Afternoon highs in the region reached into the mid-80s to low 90s.