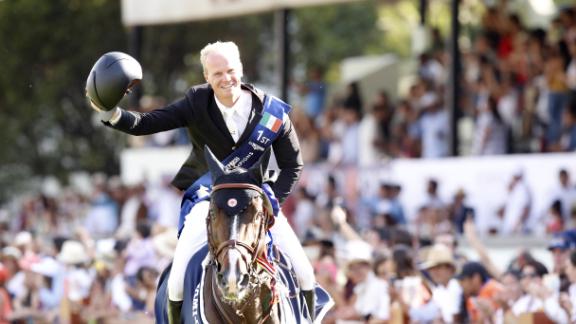 Belgian rider Jerome Guery won the second leg of the Longines Global Champions Tour in Mexico City with a stallion given to him by his best friend just two months ago.

Although some riders can take years to gel with a horse, Guery and Quel Homme de Hus, a 13-year-old bay Holsteiner, started their cooperation with a bang, winning a 12-horse jump-off against the clock with a fast-paced, wild ride at Campo Marte, a huge grass surface venue in Mexico City which hosted the equestrian events at the 1968 Olympic Games.

"For me, it's incredible," Guery said after finishing 0.96 second ahead of Abdel Said of Egypt and 1.17 seconds clear of Harrie Smolders of the Netherlands.

"This horse, I have just been riding him for two months, he comes from my best friend. A lot of emotion for me, it is a nice victory."

Guery's triumph was met with huge cheers from the energetic crowd at a packed Campo Marte and handed the 38-year-old Belgian a ticket to the lucrative Super Grand Prix at the Global Champions Playoffs in Prague in November.

Since its foundation in 2006 by former Dutch Olympic champion Jan Tops, the Longines Global Champions Tour and Global Champions League has grown into the world's richest showjumping circuit. This year, the Tour has expanded to 20 legs, including new stops in New York, Stockholm and Montreal.

After competing in a sandy arena in Doha last month, horses and riders had to adjust to completely different conditions in Mexico City, which has an elevation of 2,250 meters (7,381 feet) above sea level.

Although eight of 12 riders finished the jump-off with clear rounds, Guery was one of the few competitors who went for broke, beating Said and Venise de Reverdy with a tight turn into the final fence.

"I knew my horse has a big canter, and I wanted to use it on the big arena like this," Guery said about his elegant stallion. "I think I won on the two last ones, because I really pushed and the horse listened to me perfectly. There is not many horses like this. This really is a superstar."

Guery's victory moved him up to joint seventh spot in the overall LGCT rankings, alongside France's Julien Epaillard, with 40 points. Fellow Belgian Niels Bruynseels is the overall leader with 55 points, followed by Germany's Daniel Deusser on 52 points. Another Belgian, Pieter de Vos, is tied for third in the overall standings on 48 points with Britain's Ben Maher.

"I'm very happy," said Bruynseels, who finished in 11th place in Mexico City. "To be the leader of the ranking of competitions with the best riders, best horses and best shows in the world is something very special."

There was disappointment in the Mexican capital for Maher, the defending overall LGCT champion, who failed to reach the jump-off after his horse, Madame X, produced 12 penalties.

Maher, who dominated the tour last year with his wonder horse Explosion W had started the 2019 season with a runner-up place last month in Doha to Epaillard.

Earlier in the day, Shanghai Swans continued their perfect start to the 2019 season with a second straight win in the Global Champions League team competition.

With seven teams separated by just eight seconds after the first round, over a course designed by Javier Trenor, there was everything to play for in the second round.

Valkenswaard United had been in pole position after the first outing on Friday as Bertram Allen, with Molly Malone V, and Alberto Zorzi, aboard Contanga, finished the course close to two seconds faster than their nearest rivals, Paris Panthers and Shanghai Swans.

But United were eliminated in a dramatic second round on Saturday after Zorzi was forced to retire when Contanga pulled up injured.

That allowed the Swans to follow up their win in Doha last month with victory in Mexico City as Sweden's Peder Fredricson, Ireland's Shane Sweetnam and Deusser produced a total of four penalties, one clear of the Hamburg Giants and four ahead of the Monaco Aces.

"My horse jumped great today," said Fredricson, the star performer of the Shanghai Swans with two clear rounds on two different horses. "For a speed class, it was quite a big track. Of course, the pressure of the team and everything, everything adds up. That's what makes it so good."

The Tour heads to Miami Beach for its third leg next week with the Swans looking to extend their lead in the overall classification over their nearest rivals, the New York Empire.

"It's a good start, we to try hold on the whole season," said Fredricson, the reigning European champion.

His teammate Deuser added: "This was really a team win."

"We have a strong team and the expectations are high, but in the end we really had to do it over two rounds. We are going with a lot of confidence in the next leg."

Hi: 92° Lo: 71°
Feels Like: 82°
More Weather
A very weak cold front has moved through Thursday night and gave us some early showers and thunderstorms. Temperatures over the weekend will remain in the low 90s through Sunday.