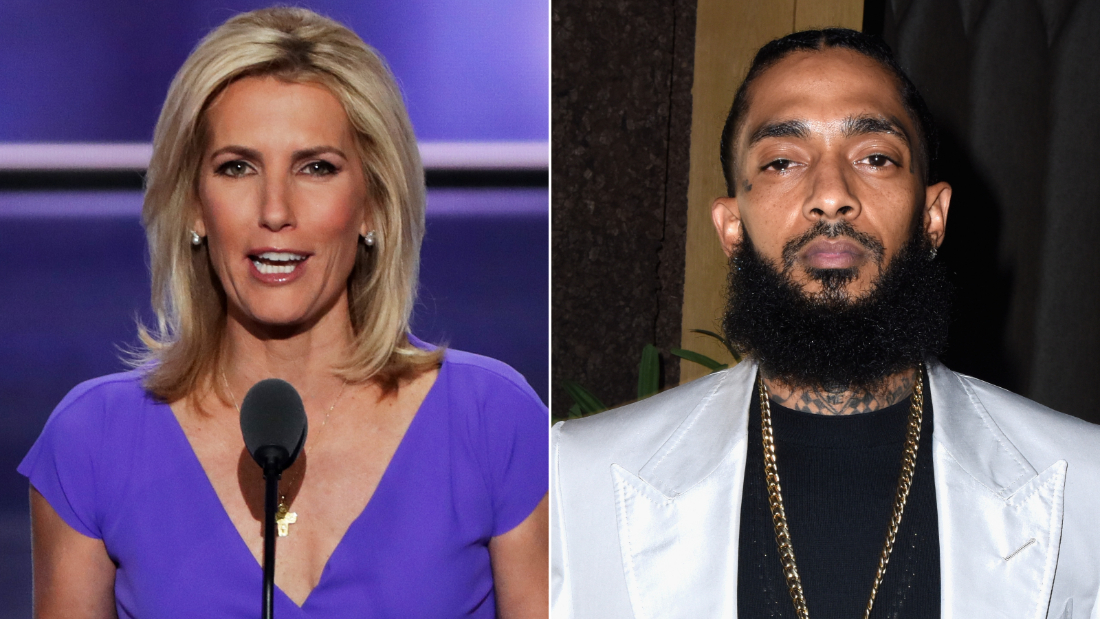 Snoop Dogg, The Game and other artists are calling for Fox host Laura Ingraham to be fired after a controversial segment on Nipsey Hussle, just one day after his memorial.

Fox News anchor Laura Ingraham is being called out for a controversial segment about slain rapper Nipsey Hussle.

On Ingraham's show last week -- broadcast one day after Hussle's memorial -- she introduced a segment about his legacy and sarcastically referred to Hussle as "this dear artist."

Ingraham played a portion of the 2016 song "FDT," recorded by rapper YG and featuring Hussle, which includes the chorus, "F---, Donald Trump."

"OK, that's a very creative refrain," Ingraham said. "The chorus that goes on and on, is that related to lowest unemployment ever, basically, for African-Americans?"

In response, some critics, including The Game, Snoop Dogg and T.I., are calling for a boycott.

The Game said Fox News should fire the host or "lose millions of viewers."

"We are NO LONGER laying quiet while you continuously disrespect our brother, culture African Americans as a whole," The Game wrote on Instagram. "I will use my platform & call on my peers to do the same. Nips passing nor his legacy is to be taken lightly as there will be consequences for any disrespect now or in the future as long as I have a voice!!!"

"My expectations have already decreased so much for mankind in the past couple weeks that this hardly surprised me," he said.

Hussle was gunned down March 31 in Los Angeles outside a clothing store he owned. The rapper was known not only for his music, but for the contributions he made to his community.

Ingraham faced an ad boycott in 2018 for mocking a Parkland shooting survivor. She later apologized.

Fox News did not respond to CNN's request for comment on the controversy.

Hi: 52° Lo: 25°
Feels Like: 40°
More Weather
Highs will be in the mid 60s on Saturday and another disturbance will give us a chance for a few sprinkles across northeast Kansas and northwest Missouri on Sunday. We are looking at a windy and warm weekend with temperatures will gradually climb back into the mid 60s by the end of the weekend.

Runaway wheel from semi-truck crashes into vehicle on I-29