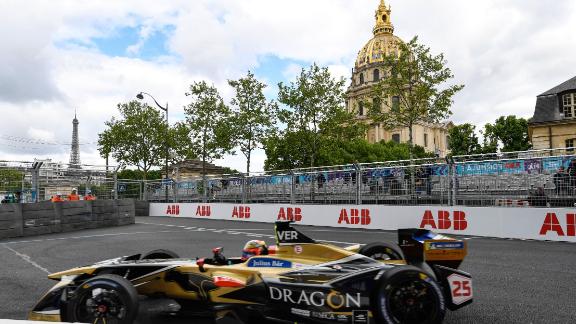 FIA president Jean Todt says having iconic cities like Paris on the calendar is the 'cherry on the cake' for Formula E.

Under the watchful eye of Mitch Evans, Jaguar's mechanics start to carefully piece together the driver's history-making car.

It's 48 hours before the Paris ePrix and the team is still riding high from its first ever Formula E victory two weeks ago Rome.

When Evans crossed the line in first place, not only was it Jaguar's first ever win in the all-electric racing series, it was also the first time in 28 years that the British manufacturer had been on the top step of the podium in any form of motorsport.

Not since Italian Teo Fabi claimed the World Sportscar Championship in 1991 had Jaguar tasted victory in motor racing.

"I've been absolutely buzzing since I crossed the finish line," said Evans, who wasn't even born until three years after that win. "To win our first race has been a really big thing for the team, for Jaguar and for myself as well.

"To finally do it after a tough two-and-a-half seasons is an amazing feeling. We're very proud, I hope it's not a one-off and we can continue the streak.

"It's been a great few weeks and I really miss winning. It makes you realize why we do it and that's the reason we do it -- to win."

Though Evans' smile is broad -- the grin has barely left his face since Rome -- the 24-year-old is under no illusions that much work still lies ahead.

In the paddock, which sits in the shadow of Les Invalides in central Paris, the Jaguar mechanics pay an almost excruciating attention to minute details as they try and replicate the performance that helped earn Evans victory in Rome.

For a brand as historic and recognizable as Jaguar, Evans and his team want to create a lasting legacy in motorsport.

"It's a really, really proud achievement, a huge honor," Evans said of his win. "I'm very proud to race for Jaguar and I've been part of the team since our (first) season, so it's great to reward them with that.

"It's hasn't been an easy two-and-a-half seasons, but the guys here have worked so hard in the factory, we've been patient, we've learned.

"It's finally come which is beautiful and to do it for a big car company, which obviously takes a lot of responsibility but I take a lot of pride in representing a brand like Jaguar and hopefully it's the first of many."

Jaguar team principal James Barclay has led the manufacturer's return to motorsport and knows as well as anyone the hard work that has gone on behind the scenes to make this team a success.

"For us it was a hugely proud moment as a team as you can imagine," Barclay told CNN.

"Jaguar's been out of motorsport for a long time until we came back in Formula E, so as a group I'm incredibly proud of all of us to be able to put Jaguar back on the top step and in a very emphatic way with a great race weekend.

"We fought for the win, we didn't get lucked into the win. It was a long time coming and we're all really proud to put Jaguar back on the top step and hopefully the first of many more."

It has been a wildly unpredictable fifth season in Formula E, one which has seen seven drivers from seven different manufacturers win the seven races so far.

But in what is arguably sport's most competitive championship, Evans has somehow found some impressive consistency and is the only driver this season to score points in every race.

The Paris circuit is one of the most impressive on the calendar and takes in many of the French capital's iconic sites, as the gold dome of Les Invalides looms on one side of the track and the Eiffel Tower peaks above the trees on the other.

But standing in the way of Evans' bid to become the first double race winner this season is a highly-motivated Parisian desperate to win on home soil.

Jean-Eric Vergne, who describes his home circuit as "spectacular," won this race last season en route to being crowned Formula E champion and is confident support from the Paris crowd will fire him to back-to-back wins in the French capital.

"I think it's the best race on the calendar, not only because I'm Parisian but because of the surroundings -- it's fabulous.

"A pole (position) will be very important -- and then a clean race with no problems, no mistakes and a bit of luck.

"I feel very good to be in Paris, it has positive energy and I always feel good coming here so hopefully that has a little role to play in the result.