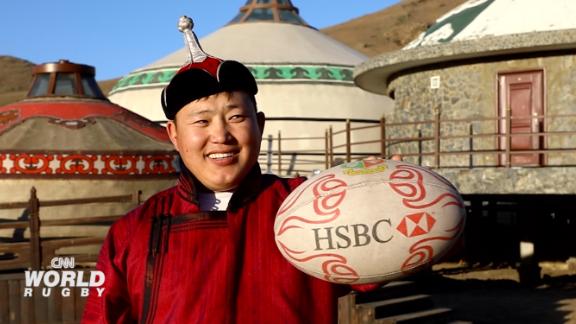 With its long history of combat sports, Mongolia is hoping to be a breeding ground for future rugby stars.

Mongolia is a country rich in heritage, shaped by centuries of complex cultural influence.

As such, it's a significant challenge for any western sport to claim the limelight from the nation's old nomadic pastimes.

But at the Chingisiin Huree camp south of Mongolia's capital, Ulaanbaatar, amidst the yurts where bone-breaking and horseback archery remain popular activities, one man is on a mission to bring rugby to Mongolia.

Khosbayar Ganbold grew up like many Mongolian boys with athletic ambitions thinking his future was as a wrestler. But a series of injuries led him to see rugby as a potential alternative to the country's most popular sport.

"Due to injuries, I spent a lot of time and hardships at hospitals. This was a time when I was asking myself, how can I make a comeback? How can I survive and overcome all of this?

"My friend came to visit me in hospital and brought me a rugby magazine. My health condition was really bad. And when I opened the magazine I saw those strong, healthy athletes. My friend told me 'lets try this out, this sport is for real men. It takes perseverance through hardship.'

"I was not sure if I could become that strong and healthy. But I followed my dream and started to train."

That was six full years before Mongolia had even played an international match. But Ganbold took to the sport almost instantly, moving over to Hong Kong to play the game professionally before returning to his homeland to spread the gospel of rugby.

Ten years on from Mongolia's first competitive game, there's been some progress. But in this part of the world the obstacles to growth lie as much with the landscape as the on-field challenges.

"The main key for success in any sport is training and it's hard to do proper training in Mongolia where there is a six-month-long winter," Ganbold says.

"Normally during midwinter its -30C ... and it's hard to play on snow, even for guys who love the sport," he adds.

READ: The 9/11 hero whose legacy lives on through rugby

Despite the challenging climate, rugby is beginning to prosper in Mongolia.

An annual "snow rugby" tournament attracts the country's best players every March. This year the event was helped along by an early spring which boosted turnout.

"Rugby is one of the fast growing sports in Mongolia," Ganbold says. "Right now there (are) eight male clubs, five female clubs, with over 300 athletes competing. Everyday information on media or social media platforms is increasing."

"But it will not hurt if we say that we are still developing right now," he adds.

For outsiders like Leland Bernard Stedge Jr., a former US Women's Army Rugby coach who now lives in Mongolia, the potential for growth of rugby in the country is strong.

"Mongolians were born to play rugby, they're natural players," he says.

"They love to hit, they love to tackle, they're in great physical condition and a lot of them are extremely, extremely fast.

"I would tell some Mongolians that I knew about rugby and they would say, 'well, we're not very good at team sports.' And I said, 'yes you are. You had the greatest team in the greatest sport in history and the greatest coach -- Genghis Khan.'"

Genghis is considered one of history's greatest conquerors, and the empire helped to build remains the largest the world has ever known.

At one time, Genghis ruled over everything that lay between the eastern coast of China and the Caspian Sea.

According to Dashdendev Gansukh, vice president of the Mongolian Rugby Football Union, rugby has many of the elements that Mongolians find attractive in sport.

"From (the) cultural side, historical side, we are very interested, or very passionate about combat sports. And rugby itself is a team combat sport. I think it appeals to a lot of people in terms of their appetite to watch the sport," he says.

"I think that now the Rugby World Cup (which will be hosted by Japan later this year) is coming to Asia, it's a really big boost in growing the audience in Mongolia," Gansukh adds.

For Ganbold, however, rugby has the power to be about more than just a recreational activity or sport through which a lucky few can make a living.

In his younger days, he says he "used to smoke, drink and wasn't a very well behaved kid" before he started playing rugby.

Now, he hopes the sport can help others experiencing their own challenges.

"We have had young athletes who have experienced a harsh life and upbringing, made some bad decisions in the past. They know the cruelties of life and even some of them have been seriously injured. But this sport changed them," he says.

"It gives them hope, courage and to some of them a second thought about the problems in their lives."