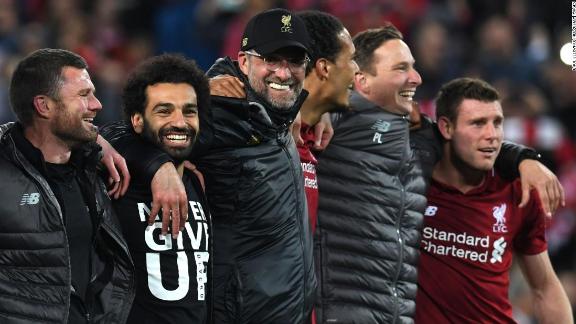 Liverpool's stunning comeback against Barcelona in the Champions League semifinals has been described as the greatest in European history. But how did the English Premier League side overcome a 3-0 deficit to win 4-3 on aggregate and stun the La Liga champions? CNN Sport looks at five key reasons why the match turned in Liverpool's favor.

Anfield under the floodlights tends to inspire. There is always hope on European nights when Liverpool plays in the iconic stadium, nestled among back-to-back terraced houses.

The city of Liverpool and the Anfield district has had its fair share of economic and social problems and the football club is seen as key to the area's redevelopment.

It's estimated that the Premier League team boosted the local economy by $644 million during the 2017/2018 season, with 1.5 million fans coming to Anfield. On Tuesday one of those fans was Australian Mark Calleja, who had traveled from Sydney to watch the second leg semifinal. He told CNN Sport that it was "rare to get an opportunity" to witness what unfolded.

Ahead of major European games the Anfield district rocks. Thousands of fans gather in the streets surrounding the stadium. Songs are sung and flares are lit as opposition teams are given a taste of what to expect once they get on the pitch.

Another warning for the opposition that this might be a stadium like no other is the "This Is Anfield" sign that's hung in the players' tunnel. It's the last thing a player would see before a game.

Fans belt out the club's anthem "You'll Never Walk Alone" ahead of kickoff to further pump up the volume. Originally written by Richard Rodgers and Oscar Hammerstein, Liverpool supporters adopted the song after Merseyside band Gerry and the Pacemakers released a cover version in 1963.

It's because of the crowd's ability to galvanize that progress to the Champions League final was never entirely dismissed despite the 3-0 first-leg deficit Jurgen Klopp and his men had to overcome. Even the most experienced visitors can become paralyzed when in the middle of the Anfield din.

"If I have to describe this club then it's a big heart and tonight [Tuesday] it was pounding like crazy," said Klopp after the miracle match. "You could hear it all over the world."

The Liverpool faithful has roused its team to achieve the unlikely before -- there was the 2004 victory over Olympiakos and the 4-3 thriller over Borussia Dortmund in 2016 -- but nothing compares to the astonishing 4-0 win over a team led by Lionel Messi, their tormentor at the Camp Nou.

At a shaking Anfield, when the lights are at full wattage and the crowd is making eardrums ring, even some of the greatest footballers the world has seen can be rattled.

"I don't think I'll see or hear an atmosphere like this again," said Alan Shearer, commentating on BBC Radio 5 live.

From sidelines to starring roles

Even with a history of defying the odds in Europe -- the "Miracle of Istanbul" when 3-0 down at halftime to AC Milan in the 2005 final to name but one -- Liverpool was not really expected to knock out a Barcelona side which had just won La Liga and was chasing a treble.

There was no Mo Salah or Roberto Firmino for Barcelona to contend with. How could replacements Divock Origi -- a player who had not scored in the Champions League -- and Xherdan Shaqiri trouble the visiting defense to such an extent that it would concede four? Well, they did.

It was the Belgian -- who has twice scored match-winning goals in the EPL this season -- who sparked the revival, tapping in from close range, sowing seeds of doubt, causing the decibels inside Anfield to rise some more.

And, of course, it was Origi who lasered the winner into the net after Trent Alexander-Arnold's quickly taken corner, described as a "genius" moment by his manager. Powerful, tireless, pacy, the 24-year-old was part of a front three which left Barcelona gulping for breath.

Shaqiri, starting a match for the first time since January, harried and hurried the frazzled men in yellow, which is not usually his forte. When a player known more for guile than grit works tirelessly then anything can indeed happen. And it did.

If the Reds were without two of their prolific front three, in Sadio Mane, the lone representative of Liverpool's famed forward line, they had an indefatigable forward who was a constant threat.

At the other end of the field was Alisson, briefly the world's most expensive goalkeeper when he joined from Roma for $84 million last summer, and playing as much a part in the astonishing victory as the men who formed the red wave in front of him.

Twice he produced fine saves from Messi, and also kept out Philippe Coutinho, Jordi Alba and Luis Suarez, to deny Barcelona a precious away goal. Neither was the Brazilian the only summer signing to shine. Fabinho was a force, Virgil van Djik dominant.

And then there was the academy product Alexander-Arnold, who is just 20, providing the creativity from the right flank missed in the first leg, and captain Jordan Henderson, surging forward, leading by example despite being hindered by a knee injury.

"Winning is difficult but with a clean sheet, I don't know how they did it," said Klopp afterwards. "I said to the boys before 'I don't think it's possible but because it's you I think we have a chance' -- they are really mentality giants. It's unbelievable."

This was 90 minutes of red rage, a heavy metal match in the Klopp mold.

In his three years at Liverpool, Klopp had already overseen enough sensational European nights to put him into Anfield folklore -- the triumph over Dortmund, last season's victories over Manchester City and the drubbing of Roma. But there had been nothing quite as joyous as this.

"I'm not sure if it will happen again because it's so special," said the German. "When I saw the boys after the game and saw the tears in their eyes, that's football. This club touches you like crazy, it's like you feel much more than others in these moments."

Only twice before had a team recovered from three goals down in a Champions League/European Cup semifinal. That an injury-hit Liverpool did it against one of the defining teams of the age makes it all the more remarkable.

Former Real Madrid and Manchester United boss Jose Mourinho said the Liverpool boss was the driving force behind the victory.

"I have to say that for me, this has one name -- Jurgen," said Mourinho on beIN Sports. "I think this is not about tactics, this is not about philosophy, this is about heart and soul, and a fantastic empathy he created with this group of players."

Though this will be a fourth major final under Klopp -- and a second successive in the Champions League -- he has yet to win silverware as Liverpool boss.

"I know what people say about me and losing finals, that's absolutely right," said Klopp. "But it's the fourth final in that time as well we are in, that's pretty special already."

"I was really angry that the manager put me on the bench," admitted Georginio Wijnaldum, a player who may not have been introduced at half-time had Luis Suarez's studs not made contact with Andy Robertson, forcing off the left-back prematurely.

With fire in his belly, a player who had previously only scored once in the Champions League morphed into a ruthless predator, scoring twice in 122 seconds to draw Liverpool level at 3-3. It was the first time the Dutchman had scored a brace for the Reds.

His first goal squirmed underneath Marc-Andre Ter Stegen's arm, his second was a sublime header. "I would have been proud of that one," Shearer, the most prolific striker in EPL history, said of the midfielder's third.

Wijnaldum came off the bench, adjusted to the pace of the chaos before him, and inflicted lethal wounds on a Barcelona side which was capitulating in the knockout stages of Europe's premier cup competition for a second successive season.

For the Catalans, there will be an inquest. For Liverpool, Madrid awaits in June after a comeback for the ages.

Hi: 38° Lo: 23°
Feels Like: 30°
More Weather
Highs will be in the mid to upper 40s on Thursday but the clouds will increase Thursday night. Conditions dry out for the rest of the week and temperatures will gradually climb back into the 50s and 60s by the weekend.

CDC official warns Americans it's not a question of if coronavirus will spread, but when