She hoped a shooting wouldn't happen at her son's school. 'Hoping didn't work' 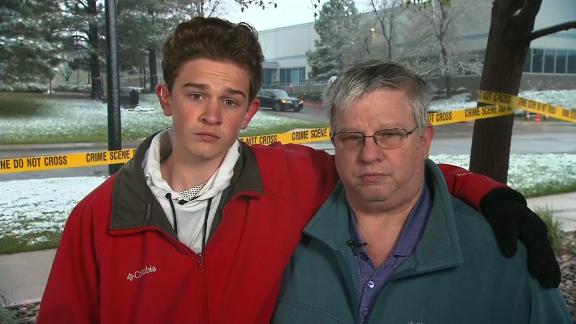 A student who survived the shooting at a Colorado school remembers his classmate Kendrick Castillo who sacrificed himself to save other students.

The day Cami Brainard feared would come, did. There was a shooting at her son's school.

"I knew that there was a possibility that it would someday happen close to home. ... And I'm sad to say that I've never really done anything about it except for hope.

The 34-year-old mother became emotional when audio captured by her son's cell phone was replayed, with an alarm sounding and a voice telling students to take cover.

"Sorry, just listening to it again just is so hard. It's definitely still very surreal. I don't want to be here right now," Brainard said, her voice shaking. "This is really hard for me, but I just feel like it's extremely important that people out there know exactly what's going on and know what's happening here."

Brainard's eighth-grade son, Owen, texted her Tuesday as gunshots rang out at STEM School Highlands Ranch -- sending her into a panic.

"There were gunshots. We are about to get escorted to leave," her 14-year-old son wrote around 2:09 p.m., minutes after the shooting started.

Brainard shared the text messages she exchanged with Owen on Facebook, along with the brief recording Owen made when his cell phone was in his pocket.

"Attention, please. Lockdown. Locks. Lights. Out of Sight," a voice says repeatedly in the background.

"They found him," Owen whispered on the recording.

Then, gunshots and yelling in the background.

"Knowing that that's my child and that he actually had lived through that ... he's going to be scarred for the rest of his life," Brainard told CNN in an interview Wednesday.

One student, Kendrick Castillo, was killed trying to stop the shooter, and eight other students were wounded. Two suspects, both students, are in custody.

Owen said his "legs were shaking and his teeth were chattering he was in such fear," Brainard wrote on Facebook.

She said Thursday she's not sure how she's going to send her son back to school.

"I have no idea. Honestly, I have no idea. I want to talk to other parents, and I want to hear what they have to say. I know I have this huge community here that's all going through the same thing, but right now, I'm just scared. And I'm scared for my son."

She said Owen's dad lives in Colorado Springs, but he came to the recreation center not far from the high school, where parents assembled to be reunited with their children after the shooting. Both parents decided Owen should go to Colorado Springs with his father for the time being.

Brainard said her work as a hair stylist exposes her to all kinds of viewpoints on current issues, but "when politics get involved, people start shutting down. And they don't listen anymore.

"And this shouldn't be about politics," she said. "It should be about being able to send our kids to school and not expect them to be brave and save other children."

She also addressed the parents of Kendrick Castillo, saying she was sorry their son was put in that position.

"I don't know him, but I absolutely love him. And I love his parents," Brainard said.

Brainard says she has a hard time, normally, dealing with anything emotional.

Hi: 76° Lo: 52°
Feels Like: 62°
More Weather
The end of the week we will see some sunshine return to the area and cooler temperatures will return on Friday and Saturday. Temperatures will be at or below normal to end the week.