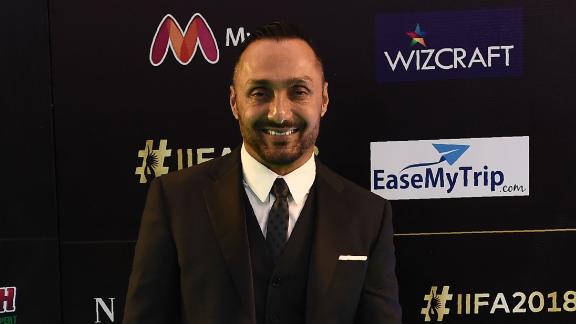 Actor and director Rahul Bose, who used to play for the Indian national team, has been a poster boy for the country's rugby ambitions

Indian actor Rahul Bose has starred in multiple feature films, directed some of his own and was even described by Time Magazine as the "new face of Bollywood" back in 2003.

But while the silver screen has given him fame, profile and even critical acclaim, it will always come second to his one true passion.

"My love for rugby precedes my entire acting career," Bose tells CNN of the rough-and-tumble game he has played since high school.

"There would have been a very good chance that after I became an actor, I should have stopped playing rugby," he jokes. "The two don't go together. One is all about your face, and the other one is all about breaking your face."

Bose has represented India at international level and even admits to organizing his film career -- which has included a number of Bengali and Bollywood hits such as "Mr and Mrs Iyer" and "The Japanese Wife" -- around the rugby calendar.

"I would look at the year, rugby wise. So, I'd look at (say) 2019, what are the international rugby fixtures we have? We have the tri-nations in Singapore, we have a seven-a-side in Bahrain, we have something at the end of the year. And then I would fit the films I was doing around the India schedule.

"Two weeks of a camp, one week of a tournament, one week to recover, hospital injuries, whatever. So, take those four or five weeks off.

"That's how I would craft my film career, around rugby, it was not the other way around. Although one paid, and was my living, and the other didn't. But there was no comparison. For me, it was more important playing for India."

READ: How rugby came to Mongolia

Rugby remains very much a minority sport in cricket-mad India.

But rugby proponents like Bose are keen to increase participation, especially amongst disadvantaged communities.

The sport has often been seen as an elite pursuit, yet programs such as those run by the Kalinga Institute of Social Sciences (KISS) have seen 27,000 children provided with clothing, schooling and given an introduction to rugby. In the last six years, 25 students who participated in the KISS program have gone on to represent India's national teams.

The country's women's rugby team has also made giant strides, claiming the silver medal spot at the 2017 Asia Sevens Championship.

For Bose, who was previously part of the Indian Rugby Board, it is "heartening" to hear that rugby is being adopted by many who would not traditionally have been exposed to it.

He hopes that the sport can bring new skills and possibilities to those who play -- be that through "leadership" skills, "wisdom" or "resilience under pressure."

From his own experiences, he says "everything that I am today as a human being is because of the sport. It's taught me to lose, it's given me my best friends.

"Anybody who puts their body on the line between you and imminent danger should be your best friend for life. It's given me the pride to play for my country. It's taught me how to come back from nothing, when you've failed."

Bose admits that building on the recent growth of the game will not be without its challenges.

Funding has to be maintained to pay for coaches and training programs. A clear rugby culture has to be defined too, Bose says. On top of this, key decisions must be be made on how best to advance the men's, women's or seven-a-side national team in international competitions and world rankings.

When asked if film could help give the change Indian society's attitude towards rugby, Bose says he thinks that is unlikely.

But he adds that it could shine a light on it to at least raise awareness of what it is.

"We haven't yet made the definitive sports film like 'Any given Sunday' or something like that. And why not? Why shouldn't there be one on rugby?" he asks.

READ: Why Georgia has rugby on its mind ahead of this year's World Cup

It's perhaps surprising that Bose himself hasn't already made a rugby movie given his passion for the sport.

Yet he says he's more than willing to be involved in any potential future rugby productions.

"Nobody can understand the sport in the industry like I do. There's no chance. I've now played the sport for 37 years, so it's in every cell of my body," he says.

"I think it's an inevitability that I will be making that film," he adds. "It's a question of only when."

Hi: 59° Lo: 26°
Feels Like: 32°
More Weather
Temperatures today were above normal across northeast Kansas and northwest Missouri. A south wind pushed temperatures into the mid to upper 50s.