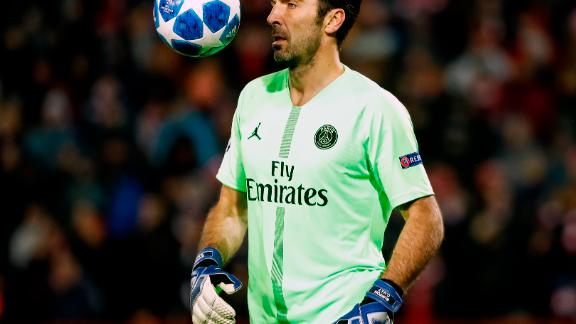 Paris Saint-Germain goalkeeper Gianluigi Buffon tells CNN about the importance of his hands to his craft and talks about his career and life lessons.

The president of French football champion Paris Saint-Germain has been charged by Parisian prosecutors with corruption in relation to a $3.5 million payment over the organization of the World Athletics Championships in Qatar, a judiciary source told CNN Thursday.

In recent years Qatar, which will host the 2022 World Cup, has pursued an ambitious strategy in using sport to put the Middle Eastern country on the map.

In a statement sent to CNN Sport, Al-Khelaifi's lawyer, Francis Szpiner, said the payments were "perfectly traced" and that the PSG chief was not involved in the money transfer.

According to Al-Khelaifi's legal team, the PSG chief executive was "placed under the status of assisted witness" in March and charged on May 16 over a $3.5 million payment made in 2011 between two companies -- Oryx and Pamodzi Sport Consulting.

Oryx Qatar Sports Investments, an investment fund linked to QSI, did not immediately respond to CNN's request for comment.

The manager of Pamodzi is Papa Massata Diack, who in 2016 was described by Interpol as a former International Association of Athletics Federations (IAAF) consultant when it issued a red notice at France's request.

"Papa Massata Diack is wanted by France on charges of complicity in receiving bribes, aggravated money-laundering, and conspiracy in an organized group to invest, conceal or convert the proceeds of active corruption," said Interpol. The 2016 red notice is in relation to an anti-doping case.

Prior to the red notice being issued, Diack told the BBC: "There was no extortion of funds from any athlete. I've never met any athlete, any agent, any person in the world ... asking to have a payment."

Diack is the son of former IAAF president Lamine Diack, who is reportedly barred from leaving France.

The French judiciary source confirmed that Lamine Diack was charged with passive corruption on March 27. And recently, there was a prosecution closing speech asking Diack to be sent in front of the magistrate's court, and it's from this matter that he's barred from leaving France. Lamine Diack did not immediately respond to CNN's request for comment.

The Diacks have been influential powerbrokers in the world of sport. Lamine Diack was the president of the IAAF -- athletics' world governing body -- from 1999-2015.

In a detailed response to the French prosecutors' charges, Al-Khelaifi's legal team said statements that the PSG chief executive is charged with having "'validated" the $3.5 million payment to the "'ultimate beneficiary' of Lamine Diack" were inaccurate.

"Nasser Al-Khelaifi was neither a shareholder nor a director of Oryx in 2011," added the PSG boss' lawyers. "He was not directly or indirectly involved in Doha's bid to host the 2017 World Athletics Championships."

In 2011, Doha had bid to stage the 2017 event, but the IAAF ultimately plumped for London as host.

"At that time he had been placed on leave of absence from his operational activities within Al Jazeera Sport, having already been in charge for several months of negotiating the acquisition of PSG," added Al-Khelaifi's lawyers.

Al-Khelaifi is also the chairman of television network beIN Sports, which has its headquarters in Doha, and also executive committee member of European football's governing body UEFA, which said it had no comment on the PSG chief executive being charged.

The 2019 World Athletics Championships is being held in Doha from September 27 to October 6.

"We continue to be available to the French Prosecutor to share any information that may assist the investigation," said the IAAF in a statement sent to CNN.

"However, we have not seen the specific indictments referred to by the media. The dates published in the media appear to coincide with the bidding timetable for the 2017 IAAF World Championships which were awarded to London.

"The 2019 World Championships bid process began in February 2014 with a decision in November 2014. Our Rightsholder for the region was, and still is, Abu Dhabi Media who signed as a partner in January 2014."

The Qatar Athletics Federations did not immediately respond to CNN's request for comment.