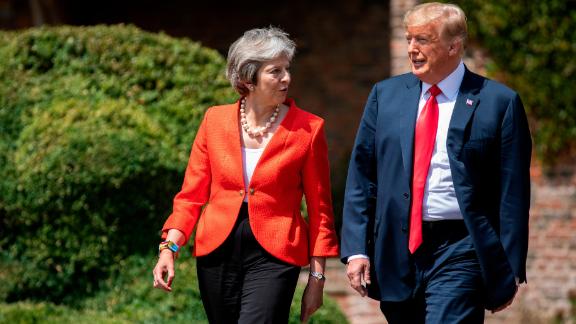 Chatham House Associate Fellow Amy Pope says that Britain should expect to get a tough trade deal with the US because President Donald Trump benefits when the United Kingdom has less reliance on the European Union.

British politicians don't find much to agree on these days. But mention the National Health Service, as President Donald Trump did on Tuesday, and the country unites in one voice: Hands off our NHS.

So what is the issue, why is it so sensitive and why has it kept coming up during Trump's visit to the country?

Britain's healthcare system is free at the point of delivery for everyone in the UK and has been since after the end World War Two. Over the years, it has become a cherished national institution, immune from criticism. Whenever governments plan to introduce charges, or suggest private investment, it inevitably causes an uproar.

The trouble is, pressures on the NHS are increasing. An aging population, demand for more expensive treatments, and a public spending squeeze, give politicians little room for maneuver. The NHS is in perpetual crisis and eventually something will need to be done about it.

American healthcare companies spot an opening. The NHS needs investment -- and after Brexit, Britain wants a trade deal with the US.

Woody Johnson, the US ambassador to the UK, started it off when he suggested on a BBC political show on Sunday that it would be part of any post-Brexit US-UK trade negotiation.

The President addressed it again on Tuesday when he was asked about it at a press conference with British Prime Minister Theresa May. "When you're dealing in trade everything is on the table, so NHS or anything else, a lot more than that, but everything will be on the table, absolutely," Trump said.

But the British public is concerned that would lead to the breakup of the health service, with parts of it being privatized. So the political backlash was immediate -- in particular from those vying to replace Theresa May as Prime Minister.

"I want to see the UK get fair deals on trade with the US and many other countries when we leave the EU," said Dominic Raab, one of the contenders. "But the NHS is not for sale to any country and never would be if I was Prime Minister."

And this was the health secretary, Matt Hancock, another putative future Prime Minister: "Dear Mr President. The NHS isn't on the table in trade talks -- and never will be. Not on my watch."

The British love their NHS. A survey last year by the leading UK healthcare think tank, the King's Fund, showed that a huge number of Britons still support its founding principles , which command that it should be free at the point of delivery, provide a comprehensive service available to everybody, and be primarily funded through taxation.

"There's this deep-rooted affection for the NHS. It certainly feels that the NHS is almost part of our national psyche," said Dan Wellings, senior fellow at the King's Fund.

Since its inception in 1948, the NHS has become an integral part of the British society and the country's biggest employer. When London hosted the Olympic Games in 2012, the opening ceremony featured an entire musical number honoring the NHS and its staff, with nurses dancing around children in hospital beds.

"There has been polling done few times over the past few years asking people what makes them proudest to be British and the NHS always tops that poll, above the royal family," Wellings said.

The resistance to overhauling the NHS cuts across the British society -- most people said they would pay more tax if the NHS needed it, according to the surveys. (Of course, once confronted by political parties who propose tax increases, it's often a different story.)

"When politicians and governments have started to look at changing the NHS, that's when you get a huge resistance from the public," Wellings said. "The fact that those politicians reacted as quickly tells you... they realize that tampering with the NHS is potentially a political dynamite."

In the United Kingdom, no politician, not even the world's most powerful one, is allowed to tamper with the NHS.

Hi: 88° Lo: 65°
Feels Like: 76°
More Weather
Another warm and humid day across much of northwest Missouri and northeast Kansas. The region could see a few storms as we head into Saturday morning. Today temperatures will rise into the upper 80s but it will feel like close to 100 degrees.