Top trainer Bob Baffert: 'Once horses get in your blood, you can't get out' 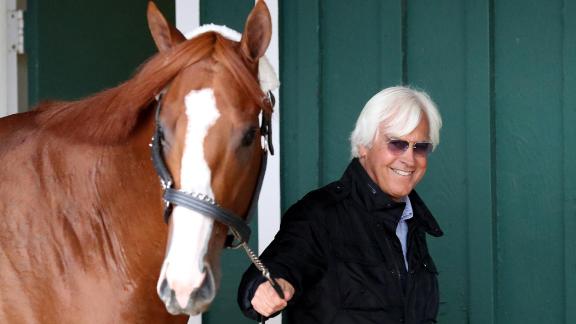 Bob Baffert is one of the most successful horse trainers in the business and has trained two Triple Crown winners: American Pharoah and Justify.

He's one of horse racing's most celebrated trainers, but Bob Baffert had to defy his mother to reach the summit of the sport.

From humble beginnings growing up on a cattle ranch in Nogales, Arizona on the border with Mexico, the 66-year-old has saddled five Kentucky Derby winners and two Triple Crown champions in American Pharaoh and Justify in his illustrious career.

It's earned him a place in the Hall of Fame, and made Baffert third on the all-time list of best trainers with more than $288 million in earnings, according to Equibase.

"I wanted to be a horse trainer against my mother's will," he told Aly Vance for CNN's Winning Post ahead of this year's Derby at Churchill Downs. "She said, 'how can you make living being a horse trainer in Arizona?'

"I just love being around horses. Once it gets in your blood, the passion, you can't get out."

As a youngster, Baffert would help his father show their cattle at shows in the region before they dabbled at training quarter horses -- the American breed famous for their sprinting prowess -- to race at various local tracks.

When he was old enough, Baffert learned how to ride and earned cash racing on dusty circuits around Nogales. Eventually, though, he realized his dream of becoming a full-time jockey wasn't going to materialize.

"I was too big, I ate myself out of a job," said Baffert, who has also trained seven Preakness Stakes winners and three Belmont Stakes champions.

READ: War of Will wins Preakness Stakes at Pimlico

READ: How young Qatari sheik shook up the 'sport of kings'

Having promised his mother he would go to college, Baffert continued his education, but he gravitated back home soon after.

He trained horses for his father, but progress was slow. "I was really disgusted with it," he says, referring to his development as a trainer.

Taking a year off, Baffert got a job as a teacher but that didn't work out either so he took up an offer to train some horses for a friend.

In 1983, Baffert moved to California to train at the famous Los Alamitos quarter horse track near Los Angeles.

"I was very intimidated because I knew how tough it was," he said. "I had 40 horses in Arizona and I took my best nine horses to L.A.

"I ran three horses the first night and I told a friend that if they don't do well I'm going back to Arizona.

'Heaven is in the winner's circle'

Baffert switched to training thoroughbreds, with a view to getting one to the Kentucky Derby.

"I bought some horses and gave myself three years," he said. "I won the Breeders' Cup Sprint [in 1992] with my first thoroughbred [Thirty Slews], which was so exciting. I really thought it was not going to get better than that."

Turns out things got much better.

In 1996 he took a horse called Cavonnier to the Kentucky Derby at Churchill Downs. The Derby debutant had his heart in his mouth as Cavonnier took the lead halfway down the stretch.

"I thought he'd won, but he got caught and got beat an inch in the end," said Baffert. "It was a devastating loss. I just thought I'd blown my shot. For a year I was sort of depressed about it."

Fortunately for Baffert, he returned the following year with a grey colt named Silver Charm.

"He got the lead and there was another horse coming and I remember saying, 'Oh Lord, you can't do it to me again, I can't get beat again,'" he said. "I would have had to check myself into rehab or something."

Time stood still for Baffert as Silver Charm surged up the home straight. "I started thinking about my time as a quarter horse trainer and my mother saying, 'Why are you wasting your time training horses?'" he says.

Jockey Gary Stevens urged Silver Charm on and he held firm to give Baffert his first win on the biggest stage.

"It was the most incredible feeling you can have winning the Kentucky Derby," he said. "You're not really mentally prepared for it. It's the greatest race in America, with 150,000 people, Churchill Downs, the Twin Spires, it's just magical.

"If there's a heaven it's in that winner's circle. That's the most expensive piece of real estate in the world. It costs so much money to get into that small patch of grass but it's worth every penny of it."

Silver Charm also won the Preakness Stakes, the second leg of the fabled Triple Crown, but was second at the deciding Belmont Stakes to deny Baffert US racing's Holy Grail.

The following year, his charge Real Quiet achieved exactly the same feat, while War Emblem gave him a third Kentucky Derby in 2002 and American Pharoah triumphed in 2015 en route to the Triple Crown.

Baffert's latest success in the Kentucky Derby was with Justify as he clinched the first leg of his Triple Crown victory last year -- only the 13th horse ever to complete the trilogy.

"We didn't know how good he was but he found another gear that I didn't know he had," said Baffert. "That's what the great ones do.

"When he won the second race [the Preakness Stakes] I thought, 'Oh my goodness, this guy's the guy.'

"It's an incredible feeling for an owner or trainer to know they've got a superior race horse on their hands. You can tell when you have a really good one.

"American Pharoah, from day one we knew he was extraordinary. I felt a lot of pressure, I thought if I was ever going to win the Triple Crown, he was my last chance. I was so relieved when he won the Kentucky Derby. I thought, 'Ok, now we can start working on the next one.'"

'Running son of a gun'

The history of the Triple Crown is littered with great horses who fell short in the final race, but if there is any blueprint to follow, Baffert says you have to start with the raw ingredients -- a gifted athlete.

Then they have to have a "great mind" and "be able to handle the pressure," he says. Staying healthy is a must, and keeping their weight and strength up over the course of the five-week span between the Derby and the Belmont is also key. And lastly, they need large doses of luck.

"Stick to those five, but number one is most important," said Baffert.

So far Baffert's horses have won 15 American Classics and 15 Breeders' Cup races among more than 2,900 victories.

But for Baffert, training race horses is more a way of life than a vocation and opens doors to great friendships along the way.

"That's the beauty of it. We are working outdoors with these magnificent animals. It's the greatest therapy you can have. Whenever you're feeling down or depressed I just go to the barn and hang out with them.

"I'm so lucky that I found something I totally love.

"I'm the luckiest guy in the world."

Hi: 59° Lo: 26°
Feels Like: 50°
More Weather
Temperatures today were above normal across northeast Kansas and northwest Missouri. A south wind pushed temperatures into the mid to upper 50s.