Christiane Endler: As well as stopping goals, Chile keeper is opening doors for other women 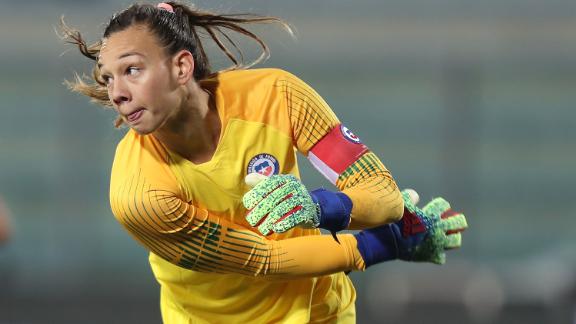 Christiane Endler stutters and tries to find the words. "Pucha," she says, a very Chilean expression of shock.

Considering just three years ago Chile -- the national team she captains -- didn't even have a FIFA ranking, the thought of leading them out against Sweden on June 11 at the World Cup is still scarcely believable.

Endler will be making history against Tuesday's far more illustrious opponents, ranked 30 places above the South Americans, as the first woman to captain Chile at a World Cup.

"It's emotional, I'm very happy," she told CNN in Paris, the home city of her club team Paris Saint-Germain Feminines. "For me, the most incredible thing is representing Chile and we hope to do it in the best possible way.

"We're very excited that we'll do exactly that and very emotional to live a first World Cup. I hope to arrive (in France) in the best condition possible. You never know what can happen but I'm working hard to represent my country well."

Chile qualified for France 2019 with a 4-0 win over Argentina that earned it second place at last year's Copa America Femenina, behind only South America's dominant force, Brazil.

It was the first time Chile had ever hosted the competition and in front of an 18,200 sellout crowd in La Serena, a city 470 kilometers north of Santiago, players and fans celebrated the historic achievement of these women long into the night.

"It was very emotional," Endler recalls. "The stadiums were full supporting us all the time. It was really pleasing to have been there and to have shared that experience with my teammates.

"I think everyone will remember those moments forever, they were truly lovely."

READ: The world of women's football, as told by the players themselves

READ: Women's World Cup 2019 -- The most important in history

'I didn't even know it existed'

Growing up, Endler never dared dream she would achieve so much as a footballer.

Her first memories of football are kicking a ball around with her older brother in their childhood home. She credits him with being the biggest influence on her as a footballer, instilling a love of the sport in her from an early age.

Despite her passion, there was very little, if any, opportunity for girls and women to play football in Chile, Endler says, and even fewer opportunities to watch it.

"I never imagined reaching so far because I didn't even know that important women's football (championships) existed," she explains. "That they played important tournaments like the Champions League or professional domestic leagues at the time.

"In Chile we never had a reference in women's football, somebody who had left and tried their luck outside. There was very little that was known but once it started growing, we saw that this reality existed and we could achieve things in women's football."

It was only when she started attending a German high school -- Endler's father is German -- that she was able to properly play football with some structure and, such were her talents, played both as a goalkeeper and a striker.

But given the lack of participants in women's football "we just had to play with boys because there was no other option," she recalls.

Endler eventually decided to dedicate herself to becoming a goalkeeper and in 2008 was rewarded with a call up to represent Chile in the Under-20 Women's World Cup.

That the tournament was hosted on home soil only added to its significance. For many in the country, this was the first time they had ever been exposed to women's football.

And for the young women taking part, it was the first time they had been treated as professionals.

"We had great preparation, a full year training and dedicating ourselves exclusively to that event," she recalls.

Endler was just 17 years old at the time and although Chile didn't make it out of the group stages, that squad still made history.

"It was incredible to play in the first Women's World Cup that Chile had ever competed in, at any age group," she says. "In Chile, with the support of so many people, the stadiums were always full. For me, it will be an experience that I will never forget and has been one of the best I've had in my life.

"I did quite well," she adds humbly. "I had a lot of recognition from different parts and they also called me from a university in the US to continue playing and study at the same time.

"In that moment I realized I could make a career from this and maybe dedicate myself to being a professional footballer and making a living from it."

Best in Spain, best in France

Just three years later, Endler won the Copa Libertadores -- the South American equivalent of the Champions League and the most prestigious club trophy on the continent -- and placed herself on the radar on some of Europe's top clubs.

In 2014 she earned a move to Chelsea Ladies but a succession of injuries hampered her progression and ability to challenge for a place in the first team.

After just one season in London, she returned to Chile with former club Colo-Colo, not only to earn some playing time but to also rediscover her passion for a sport she had started to fall out of love with.

But it would be her next move to Europe that would be the first real step on her path to becoming one of the most highly-rated goalkeepers in the world.

Playing for Valencia in 2016-17, Endler earned Spain's Zamora trophy for being the goalkeeper to have conceded the least goals during the season.

She let in just 11 goals in the 30-game campaign and for much of the season Valencia was competing at the top of the league with powerhouses Atletico Madrid and Barcelona.

"For us it was an achievement for the club as a whole, not only for me," she says. "Because Valencia was not one of the biggest clubs and we were fighting at the top of the table. It was a great season."

Her performances after just one season convinced PSG Feminines to sign her as part of the club's ambitious new project to try and challenge perennial champion Lyon, not only for the French league but the Champions League too.

In Endler's first year in Paris, the club won the French Cup -- only the second major title in its history -- and this season ran Lyon close, taking the title race to the penultimate day of the season.

After finishing second in the league and reaching the Champions League semifinals, the 27-year-old was voted the best goalkeeper in France by her fellow professionals to cap another fine season in Europe.

"It makes me very happy," she says. "The votes come from the players and I'm happy that they recognize my and rate me in that way. It makes you feel like you are doing things well and that you are important to the team. It's a great award.

READ: 'Football is life' -- Nigeria's plan to become a force in women's football

"Unfortunately, this year we (PSG) didn't win a single title but I think with the change of coach and with the new players who are all very young, we are adapting and preparing to hopefully achieve good things next year," she adds, referring to Olivier Echouafni's appointment in 2018.

"But I think in general they have been two very good years."

In Chile's first World Cup match against Sweden, Endler will come up against PSG teammate and good friend Hanna Glas. She admits competing against someone she has trained and played alongside all season will be an unusual experience, but it's one she is relishing.

"We have jokes between us but we are all very focused, preparing ourselves in the best way to arrive at the World Cup in the best condition," Endler says.

"We have a great relationship and it is nice to face people that you already know have a friendship with."

Having achieved so much already in her career, Endler is acutely aware of her position as a role model and how important it is for her to be the benchmark for young girls in Chile that she never had growing up.

Later this year, she will open up her third all-female football school in the country and has visions of opening more in the future.

Though there have already been several talented players to have arrived at the schools, the idea is to just give girls a place to play football rather than trying to find the next star of the national team.

"The idea arose because I lived in Chile and despite the fact that they have opened schools and that today there are places -- but not many -- to practice, there was not a football school that was 100% female," she explains.

"We feel a responsibility to help the girls who come from below [poorer in society], who do not have the chance to play football and open doors for them with the schools and giving my country a good name outside of Chile. I feel like a reference and I hope to be a positive reference for them.

"It feels like doors are opening for other women to realize their dreams and not only in football. There are things that can be achieved with hard work and effort and I think we can help many women, to fulfill their dreams."