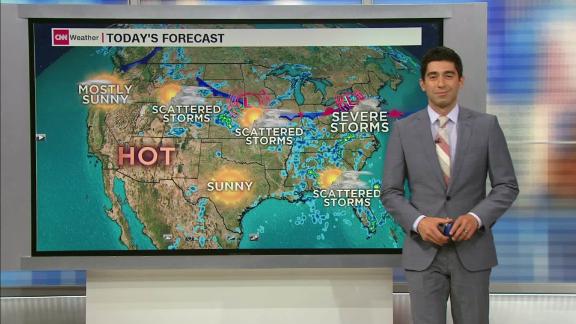 Severe weather could affect over 70 million in the southern Plains and the east coast. This could accumulate over the coming days to bring flooding to parts of the Midwest from Kansas towards Indiana. Meteorologist Pedram Javaheri has the forecast.

Here's what else you need to know to Get Up to Speed and Out the Door. (You can also get "5 Things You Need to Know Today" delivered to your inbox daily. Sign up here.)

One thousand more US troops are headed to the Middle East amid heightened tensions with Iran. The additional troops will be used for "defensive purposes" to address threats to US interests in the region, acting Defense Secretary Patrick Shanahan said. The deployment will include intelligence, surveillance and reconnaissance aircraft and missile defense for force protection. Meanwhile, Iran announced it is ramping up enrichment of low-grade uranium. In a little more than a week, it will pass the limit on the amount it is allowed to stockpile under the nuclear deal it signed in 2015 with the West.

After delivering one of the most shocking upsets in US political history, can President Trump rekindle some of that 2016 magic in 2020? We'll start to get answers tonight, as the President officially launches his re-election bid with a rally in Orlando. No longer the political outsider, Trump must defend his record against a Democratic Party that's desperate to kick him out of office, CNN's Stephen Collinson says. Will the President make any changes from the way he ran in 2016? No, it looks like Trump will be Trump: "I'm just telling you I'm going to do it the same way I did it the first time," Trump told ABC News in a recent interview. Stay up to date on all our 2020 election coverage by clicking here. You'll find info on all the presidential candidates, where they stand on the issues and get the latest polls.

Another American tourist has died in the Dominican Republic. Leyla Cox, 53, died June 10 in her hotel room, the Excellence Resorts in Punta Cana confirmed to CNN. She's the eighth American to die there over the past year. Officials in the country are scrambling to contain the fallout from the deaths (and the shooting of ex-baseball player David Ortiz) and protect the tourism industry. They're stressing that these are "isolated incidents" and that the DR is a safe place to vacation. The resort where Cox was staying said she died of a heart attack, citing forensics, but CNN hasn't independently confirmed that.

Who turned off the internet in Ethiopia? Internet outages have kept many Ethiopians offline for about a week, and no one's been able to get a straight answer as to why. Social media platforms like Whatsapp and Telegram have been blocked. Even text messaging services have been down since late last week. Ethiopia's telecoms provider declined to comment on the ongoing outage, and a government spokeswoman hasn't responded to CNN's questions. There is speculation that the internet has been blocked to keep students from cheating while they take their national exams. But Ethiopia has a history of switching off the internet for months at a time in regions where there have been pockets of unrest.

Gloria Vanderbilt was a fashion designer. An artist. An author. An actress. And a socialite. But she was also a mom. Her son, CNN's Anderson Cooper, announced his mother's death from cancer at age 95 on CNN with a touching tribute. In it, he recounts her "extraordinary" life: the rich and powerful family she was born into, the custody battle that thrust her into the spotlight as a child, her determination to "make something of her life," her search for love. Cooper called her "the strongest person I've ever met, but she wasn't tough." She never developed a thick skin to protect herself but instead opted to feel all of life's pleasures and pain, Cooper said.

"The last few weeks, every time I kissed her goodbye, I'd say, 'I love you, Mom.' She would look at me and say, 'I love you, too. You know that,'" Cooper says in his tribute. "And she was right. I did know that. I knew it from the moment I was born, and I'll know it for the rest of my life. And in the end, what greater gift could a mother give to her son." Click here to see her life in pictures.

"We saw fuss in the court glass box. We could hear the defendants screaming, 'Dr. Morsy has fallen.'"

The show must go on

Yes, Cardi B suffered a wardrobe malfunction while performing at Bonnaroo. Thankfully, she had a bathrobe handy.

Out of the bag

The Pakistani politician had a big news conference that was going to be livestreamed. Unfortunately, a staffer left the cat filter on.

Looks like we'll be headed back to Panem. "Hunger Games" author Suzanne Collins is writing a prequel novel that'll be out next year

The Twitter video of a newborn baby abandoned on a garbage dump broke their hearts. They decided right then and there to try to adopt her.

The Sharks and Jets are together again, as Steven Spielberg offers up a quick peek at the new "West Side Story."

Who needs Tony Stark? A former "MythBusters" host made his own bulletproof Iron Man suit. Oh, and it can fly, too.

Are any of those emergency room scenes in the movies and TV even close to being accurate? A surgical resident takes a look. (Click to view.)

Hi: 34° Lo: 28°
Feels Like: 22°
More Weather
Another few inches of snow will be possible Thursday evening into Friday morning. Expect snow to slowly exit the area from west to east through the day on Friday.