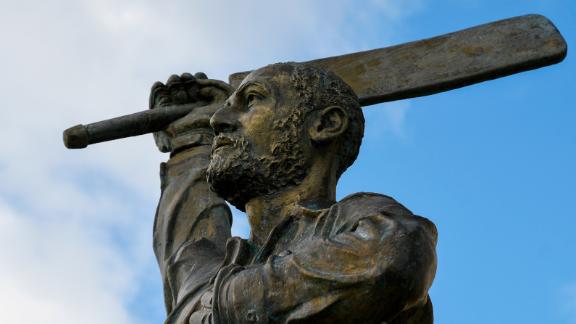 Cricket legend Viv Richards says England has given Jofra Archer "all the respect" he deserves after the bowler turned his back on the West Indies.

Archer, who was born in Barbados and grew up playing cricket for West Indies junior teams, decided to pursue an international career elsewhere after being left out of the Under-19 team for the 2014 World Cup.

The 24-year-old, who qualifies to play for England through his British father, became eligible for his newly-adopted country in March and made his debut in a one-day game against Ireland last month.

He was then included in the World Cup squad and has shown glimpses of why England was so desperate to have him in its team by taking nine wickets in the hosts' first four group games.

READ: 'We can live or we can die": How cricket redefined a war-torn nation

And two-time World Cup winner Richards, widely considered as one of the greatest to have ever played the game, says Archer will now believe he is in the best place to develop his undoubted talent.

"I think that the individual in himself would have felt that he's in the best place because of the way I think he was maybe treated by the West Indies personnel when he was a member of the Under-19 teams," Richards told CNN of Archer's decision to make the move to England.

"He came to England and England gave him all the respect I think he deserves and that's why I think at present he's where he's at now.

"He's feeling this is the best place for him and you cannot knock the guy for that."

Archer certainly enjoyed renewing acquaintances with the West Indies last week. The fast bowler took three wickets as England eased to victory to maintain its hopes of a place in the semifinals.

"It is just unfortunate how things went in terms of his decision-making, but he is a good talent," West Indies captain Jason Holder told reporters last week when asked about Archer's decision.

"He's grown up in Barbados playing cricket so what you see -- what I'm seeing of Jofra doesn't surprise me. He is one of those guys who has always had ability and talent. It is just unfortunate how things went in terms of his decision-making but he is a good talent."