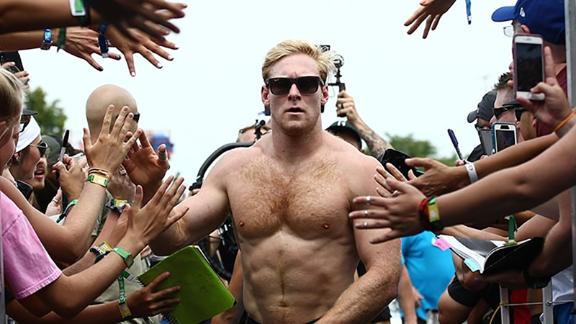 Canadian Patrick Vellner is the second fittest man on the planet, but does the chiropractor student think he can take down Mat Fraser at CrossFit Games?

For the last three years, no one has come close to challenging CrossFit Games champion Mat Fraser.

Not only has Fraser won every competition he's entered, he has also dominated the field, with ever increasing margins.

However, if there's one man who is capable of dethroning Fraser, it could well be Canadian Patrick Vellner.

The 28-year-old from Ontario, Canada, has finished on the podium in each of the last three years at the CrossFit Games, finishing second in 2018.

Remarkably, while his contemporaries trained full-time, Vellner was still in school studying to become a chiropractor, though the former gymnast doesn't feel this academic commitment weighs against him.

At the 2018 CrossFit Games, Vellner suffered a myriad of misfortunes, enough to derail the toughest of competitors.

In the opening event, a cycling criterium, or "crit," Vellner crashed, resulting in him having to race part of the course carrying his bike until a replacement could be found.

Then during the "Battleground" obstacle course, Vellner's leg got caught in a rope ladder, causing him to fall 15 feet to the ground, landing on his shoulder.

He even had to deal with a piece of rogue weightlifting equipment somehow rolling away mid-event, forcing him to chase after it across the competition floor, costing him vital seconds.

Vellner dusted himself off, carried on and still managed to finish second. It's this workmanlike attitude, partnered with the fact that he's not a full-time athlete that has contributed to Vellner becoming a fan favorite among the CrossFit faithful, regularly receiving rapturous applause above and beyond any of his rivals.

"I noticed it last year." Vellner said. "And that's cool. It's something that I'm proud of. But I think that to a certain degree it's a result of how I've managed to get to where I've been.

"I've had a lot of little injuries. Last year was a comical year with the amount of mistakes I made and little things that happened. But you know, like I said, I just dust myself off and I keep chugging forward.

READ: How CrossFit star Sara Sigmundsdottir dealt with a broken bone on the biggest stage

"I think a lot of people can identify with that and appreciate that. It's not a smooth run. I don't make it look easy. But I get it done."

In August, the CrossFit Games will once again be held in Madison, Wisconsin, where Vellner will join the field competing for the title "The Fittest Man on Earth."

The one man standing in his way will once again be Fraser, the three-time defending champion, whose dominance in the sport has made it seem like everyone else is competing for second.

But Vellner believes Fraser is beatable, and that he could well be the one to do it. "Is it going to be easy? Absolutely not," Vellner acknowledges.

"If I think that he's going to roll over, he's not going to. He doesn't make it easy for anybody and I wouldn't want him to, frankly.

Hi: 59° Lo: 26°
Feels Like: 54°
More Weather
Temperatures today were above normal across northeast Kansas and northwest Missouri. A south wind pushed temperatures into the mid to upper 50s.