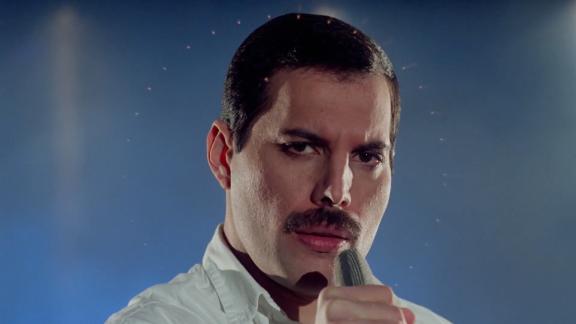 A close friend of Freddie Mercury released a new version of the Queen frontman singing "Time Waits for No One," accompanied only by a piano.

Before recording the final version of "Time," Freddie Mercury sang a stripped-down version for singer/producer Dave Clark, accompanied only by a piano.

Clark met the Queen frontman in 1985, when the two recorded music at London's Abbey Road Studios. There, they recorded "Time," the title track from Mercury's sci-fi rock musical. But before recording the final version, filled with percussion, Mercury did a piano only version, which is now being released as a new single, "Time Waits for No One."

Clark told USA Today the toned-down version gave him "goosebumps," that day. He unearthed the recording in 2018 and added a new piano track by the original pianist, Mike Moran.

"It (became) a mega-production, which I was happy with and Freddie loved. But I didn't think about what we had originally done until a decade or so later, when I thought, 'I've never felt that sort of goosebumps feeling that I got on that original run-through at Abbey Road with just Freddie and piano," Clark said.

He waited until after "Bohemian Rhapsody," the blockbuster biopic about Mercury's life, had been out for some time in order to make sure the new track got the attention it deserved.

Hi: 42° Lo: 39°
Feels Like: 35°
More Weather
A cold front is currently moving through our area this morning dropping temperatures into the lower 40s and upper 30s. Today will be a cool day with highs in the upper 40s and lower 50s with increasing clouds. Temperatures will fall into the lower 30s tonight. We could see a few areas of light rain and drizzle this evening, but precipitation chances will start to increase overnight into tomorrow morning. With the sub freezing temperatures, precipitation will transition from light rain and drizzle in the evening to snow overnight into Tuesday morning. Snowfall will continue through the morning hours on Tuesday before transitioning to a rain/snow mix while it exits the area. Most areas will see around 1-3 inches. Accumulations will stay mainly on grassy and elevated surfaces, but expect slushy road conditions Tuesday morning. Conditions will slowly start to improve for the rest of the work week with sunshine returning and temperatures slowly warming. Rain chances will return for the end of the work week.

KQ2 Forecast: A mild Monday ahead with increasing clouds