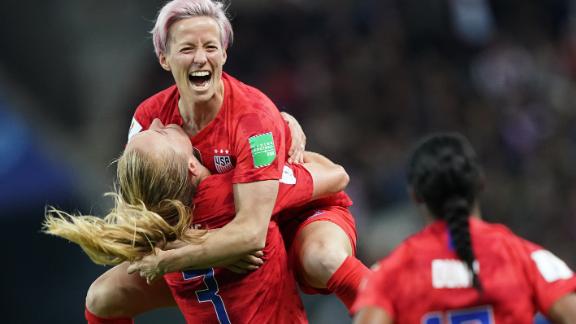 American women's soccer co-captain Megan Rapinoe has no plans to go to the White House if the national team is invited. CNN's Andy Scholes reports.

American women's soccer co-captain Megan Rapinoe is not planning to go to the White House if the national team wins the World Cup.

A reporter from Eight by Eight, a soccer magazine that looks at the sport and its place in culture, asked Rapinoe if she was excited about going to the White House if her team wins the Women's World Cup.

The magazine posted the short interview clip Tuesday on Twitter.

The US national team is competing in the Women's World Cup, and plays host country France on Friday.

Other teams have skipped the White House visit

It's not the first time professional athletes have turned down a visit to the White House.

The Golden State Warriors decided not to go to the White House last year after winning an NBA title. Before their scheduled visit, President Donald Trump revoked their invitation on Twitter.

Trump also canceled a visit from the 2018 Super Bowl champions Philadelphia Eagles because of controversy over standing for the national anthem at games.

Rapinoe is an advocate for social equality

Rapinoe, one of the women's national team's co-captains, has been outspoken about social justice issues. In 2016, she was among the first white professional athletes to show solidarity with Colin Kaepernick when media first began reporting on his kneeling during the national anthem. Rapinoe knelt during a game a month after it was first noticed that Kaepernick was kneeling.

"I think it's actually pretty disgusting the way he was treated and the way that a lot of the media has covered it and made it about something that it absolutely isn't," she said. "We need to have a more thoughtful, two-sided conversation about racial issues in this country."

Just this week, Trump told The Hill that he doesn't think it's appropriate for Rapinoe to protest during the national anthem.

In May, Rapinoe called out the soccer's leadership for not doing enough to level the pitch for men and women players. She acknowledged "strides" had been made toward the better treatment of women, but FIFA essentially has "unlimited resources" and a historic lack of investment in women's games.

"I would like to see a major paradigm shift," she said.

Rapinoe is also one of 28 players suing the United States Soccer Federation, alleging the men's national team earns more than they do even though they play more games and win more matches.

Hi: 59° Lo: 26°
Feels Like: 32°
More Weather
Temperatures today were above normal across northeast Kansas and northwest Missouri. A south wind pushed temperatures into the mid to upper 50s.