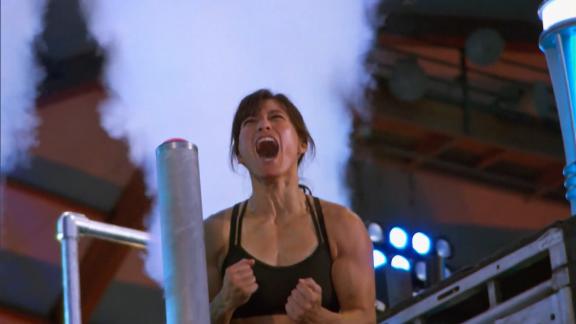 Sandy Zimmerman, 42, is both the first mom and oldest woman ever to complete a course on "American Ninja Warrior."

As Sandy Zimmerman stared down the improbably difficult obstacle course before her, she wasn't thinking about the history she could make as the first mom to qualify for the final round of "American Ninja Warrior."

She prayed instead, asking for strength to navigate the voices inside her head.

One belonged to a scared, doubtful girl who lived on welfare and was abused in the foster care system.

The other was that of a 42-year-old mother of three who defeated the odds to make a life for herself and her family.

"Please let me listen to the right voice."

Clearly, the good won out.

Zimmerman triumphed and became the only mother to ever make it to the end of the course, and one of very few women with the honor to boot.

The physical education teacher and former Division 1 basketball player and Judo champion breezed through the course, conquering the Lunatic Ledges and monstrous Warped Wall, in the Seattle/Tacoma qualifier round that aired Monday. And she did it to the rapturous applause of her three children and husband.

The "Ninja" athlete from Spokane, Washington, competed twice in the series before but failed to pass the second obstacle both times. Two major knee surgeries benched her for a year before she returned to the competition in its 11th season.

"It just ate at me," she told CNN. "That is not how my 'American Ninja Warrior' journey is going to end."

With her kids in tow, she trained on a homemade obstacle course three times a week for short, intense intervals, interspersed with weight training. The regimen perfectly suited her schedule as a busy mom, she said.

Her third submission video earned her a third chance at glory. And this time, she was ready.

The moment she made history

She easily jumped aboard the hanging "lunatic ledges," then sprung from a trampoline onto a spinning barrel.

The "broken bridge" was easy. She sailed across its scattered steps in three seconds flat.

But no one that day had made it past the "lightning bolts," which look like a demented version of adult monkey bars. She'd have to push them up while hanging beneath them to make it to the next obstacle.

But she did, and she threw her body down on the mat in victory. There was just one obstacle standing between her and her place in the finals--the unbelievable 18-foot "warped wall."

The wall's steep slope seems better suited for an X-Games skater than a woman on foot.

Her first run was short. Her fingers grasped for the edge but couldn't reach it.

The crowd chanted her name. The hosts asserted that this was "her dome."

And on her second try, she gripped the side and didn't let go.

She smashed the buzzer on top and made history.

She's not done yet

Her daughter wasn't impressed by her victory, though. She told Zimmerman it was "embarrassing" there hadn't been another mom victor yet.

"I love that my daughter gets it."

She isn't the first mother to compete (NBCUniversal's Kevin Castech pointed to Maggie Thorne and Sarah Schoback as notable moms who ran the course), and she certainly won't be the last.

Her advice to future ninja moms?

"Set a big dream and give it time."

It took her three years to achieve hers, and she's just getting started: she'll compete next in the city finals in August

Even if she's not crowned the victor (only two competitors, both men, have ever finished the final course), she walks away with renewed confidence, a killer title (Ninja Mom!) and one less pessimistic voice in her head.

"It is so powerful when you say yes to something crazy. And this is crazy."

Hi: 34° Lo: 22°
Feels Like: 30°
More Weather
The good news is our temperatures will be on the rise through the week. Sundays highs will be in the middle to upper 40s and Monday is expected to be even warmer. There is a slight risk for some evening rain showers Tuesday. By midweek highs will be pushing the 50s. By the end of the week we could be seeing highs in the 60s.