'You can't make a horse do something out of pressure': Pieter Devos on the secrets of his success 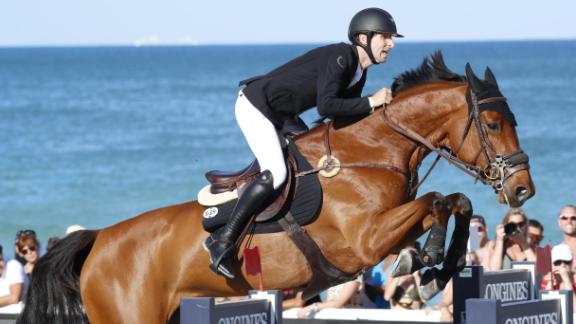 2019 LGCT Miami Beach Grand Prix winner Pieter Devos is one of the tour's top riders. Just what are the secrets of his success?

The Belgian rider leads the overall rankings at the halfway stage of this season's elite show jumping competition and stormed to victory at the Miami Grand Prix earlier in the year, riding Claire Z.

It may have been the first time Devos had returned to the winning circle since 2014, but the 33-year-old has won more than $1 million in prize money competing in the GCT.

But what are the secrets of his success?

'You listen to your horse'

As well as being a good "pilot" in the ring, Devos says success is only possible after forming a strong connection with your horse.

Such a process can't happen overnight, though, and may take up to two years to form, he says.

"You listen to your horse and feel what they're doing and you react off it," Devos told CNN's EQ equestrian show.

"It's that chemistry between you and the horse that makes you become a perfect combination."

READ: "It's about mutual give and take: "Jessica Springsteen's secrets of success

Maintaining that relationship then becomes a daily task which Devos balances with his work training, breeding and selling horses from his family stables.

More so than anything else, he knows that a happy horse will lead to vast improvements in the ring.

"You can't make a horse do something out of pressure. I think the horse must have the feeling that it's very happy to do it for you," he added.

Watch the video at the top to see Pieter Devos reveal the secrets of his success.