Megan Rapinoe's teammate on President Trump: 'I refuse to respect a man that warrants no respect' 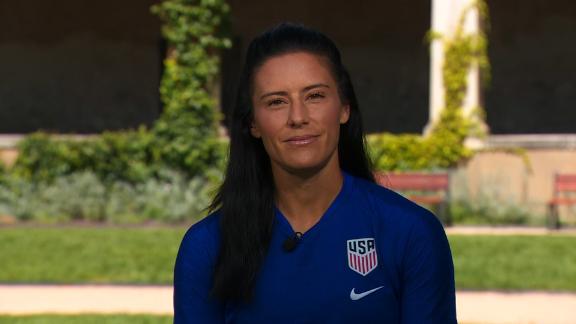 US women's World Cup player Ali Krieger says she will not visit the White House if invited by President Trump.

US national soccer team player Ali Krieger has said she would "absolutely not" go to the White House if invited and stood by her teammate Megan Rapinoe in her war of words with US President Donald Trump.

The 34-year-old defender -- a veteran of three Women's World Cups -- believes it was important for her to publicly support Rapinoe, who has attracted as much media attention for her comments off the pitch as her exploits on it.

"I refuse to respect a man that warrants no respect," Krieger told CNN New Day's Alisyn Camerota of Trump. "I feel that staying silent at times can side with the oppressor and I didn't want her to feel like she was having to process this all alone, because a lot of us do have those similar feelings.

"I wanted to make sure that as one of her close friends, she didn't feel that and I feel like we're able to focus -- as women it's funny, imagine that, we can multitask -- on two things at once.

"I refuse to just sit back and watch an abuser, a bully talk like that to my friend and I support her as a friend and I wanted to make sure that I said something that meant something to me and was important to me and that's why I did what I did."

Krieger -- a Women's World Cup winner with the US team in 2015 -- last week responded to Trump's string of tweets about Rapinoe, writing: "I know women who you cannot control or grope anger you, but I stand by @mPinoe [Rapinoe] and will sit this one out as well."

The US defeated England 2-1 Tuesday to set up a clash with the Netherlands in Sunday's showpiece final and Krieger insists that the players' off-field battles have no impact on how they perform on the pitch.

"Honestly, after I tweeted about that incident I haven't really been on Twitter and focused on him (Trump) at all," she said. "More importantly, Barack Obama tweeted at us which I definitely liked so I saw that one and I was really excited about that," she says, grinning from ear to ear. "And we all were as well.

"I don't think it takes a lot of mind space to go ahead and tweet something out that's very important and then just refocus -- turn it off and then refocus on the job. What we're doing here is to win."

READ: 'You can't win a championship without gays'

The US women's squad may yet get the chance to visit Washington D.C.

Last week, Rep. Alexandria Ocasio-Cortez invited them to the House of Representatives and Krieger said she would "absolutely" take her up on the offer.

"I could say that after this game, we could pack our bags and be on our way, but that's obviously not my choice," she said. "So we'll have to regroup and see what happens but most importantly we have this game on Sunday, we have to perform.

"We have to win and then everything else will come after that -- so one day at a time. Most importantly we need to focus on this game and then and then things will obviously come into play after that."

Hi: 71° Lo: 54°
Feels Like: 42°
More Weather
Another beautiful day across the area on Tuesday with temperatures reaching into the low to mid 60s. Another sunny and warm day on Wednesday across northwest Missouri and northeast Kansas and we will see the winds start to pick up out of the south which will help us continue with the above normal high temperatures.