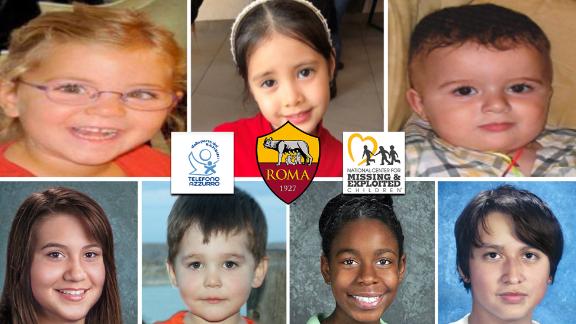 Known for its wacky and weird social media, Italian club AS Roma is using its transfer announcements for good - helping to locate missing children.

Hundreds of thousands of children are estimated to go missing every year in the US alone and now one leading European football team has decided to use the power of its social media accounts to help publicize the search for some of those kids.

Followed by millions of people across the world on social media, Italian club AS Roma wants to use the "viral nature" of social media for "social good."

Inspired by US rock band Soul Asylum -- who used the music video for "Runaway Train" to promote the search of 36 missing children -- the Serie A team has partnered with charities National Center for Missing and Exploited Children (NCMEC), Telefono Azzurro, Missing People and Missing Child Kenya.

And with every transfer announcement Roma makes this summer, the club will share two videos of missing children -- one from the US and one from Italy initially.

Due to the lack of a concrete definition and unreliable statistics, it's not known how many kids go missing every year worldwide but estimations suggest over one million cases are reported annually.

Roma's posts will show the faces of just some of the missing children and will include details of the search which has been provided to the club by the respective charities.

"It's not about Roma trying to be original or to get a pat on the back, it's actually more about how we can do as much as possible to try raise awareness," Head of Strategy at AS Roma Paul Rogers told CNN Sport.

"If we can help in any small way in maybe finding someone who has a piece of information that might result in someone getting back in contact with one of the charities, then it would be a great thing."

It's official Twitter account has nearly two million followers, while the Italian team's English handle has another 445,000 followers.

"There's a lot of self promotion and we've certainly done that sort of stuff in the past," added Rogers, who said there was no real hesitation in changing tone.

"But we thought this year, why don't we try and do something that had a bit more meaning to it than just promoting ourselves."

The current campaign was launched on Sunday with the signing of Leonardo Spinazzola. The video has had over six thousand retweets on its English language channel and was viewed over one million times in the first 24 hours.

Rodgers admits the campaign has been more popular than the club thought and has been buoyed by the positive response.

It's yet another demonstration of the influence sports clubs can have on the wider community, he says.

"I definitely think it can grow bigger than this," said Rogers, who confirmed the club was interested in talking to a number of other charities around the world.

"If another organization or sports team decided to do something similar. I think that would be great success."

'It absolutely can find missing children'

According to the American-based NCMEC, the initiative has already had an impact on the amount of traffic coming to its site -- it recorded an increase of 600 followers on their social media accounts after the first video was posted.

The charity has been working to help missing children and their families for 35 years but have never entered a partnership quite like this one.

"It takes one person to see an image of a missing child and come forward with information. The more people that can see the image, the greater that chance is."

The charity worked closely with Roma to select children who would benefit most from the international exposure, namely critical cases where the children are thought to have left the country.

Having initially been a little cautious about partnering with a football team, the charity has praised the support it has received from the Italian outfit.

"This is very unique to us, and really quite an amazing chance for exposure to bring these kids home," added Kovar.