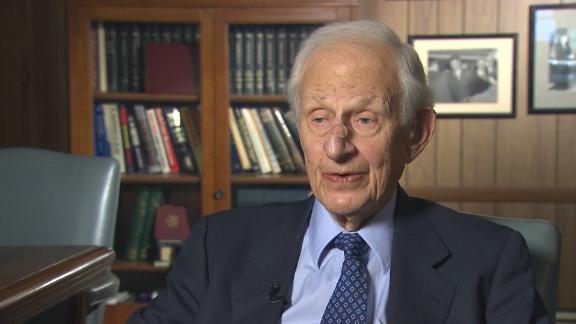 During an 2009 interview with CNN, former Manhattan district attorney Robert Morgenthau said he made a promise to devote to life to public service after his ship sank while serving in the Navy during WWII.

Robert M. Morgenthau, the longtime Manhattan district attorney who set the "gold standard" for prosecutors and was the model prosecutor for the TV series "Law & Order," has died at the age of 99.

In that time, he navigated the New York City fiscal crisis of the 1970s, the crime boom of the '80s and '90s and the post 9/11 era in the 2000s, all the while racking up high-profile prosecutions of celebrities, mobsters, terrorists, money launderers and Wall Street fraudsters.

Morgenthau created 34 bureaus and units within the DA's office specializing in labor racketeering, identity theft, firearms trafficking, Asian gangs and cold cases, among others. The sex crimes unit, in its infancy when Morgenthau took office, grew into the prototype for similar units across the country, CNN wrote in 2010.

His office became the model for "Law & Order," the New York City police and legal drama created by Dick Wolf that ran from 1990 to 2010. The show's first fictional district attorney, Adam Schiff, played for 10 years by actor Steven Hill, was said to be based on Morgenthau.

The real-life Morgenthau even had a cameo role on the show as a judge, and he recalled to CNN one time he met Hill.

Morgenthau's office led the prosecution of five young men of color who were convicted of the 1989 rape of a Central Park jogger. In 2002, he agreed to dismiss the charges against the so-called Central Park Five, after another man admitted to the crime and provided matching DNA evidence, exonerating the group of five.

Morgenthau said he first decided to dedicate his life to public service when the young Naval officer's ship was torpedoed and sunk in the Mediterranean Sea off Algiers in 1944 . He was floating in the water for hours.

"I made a number of promises to the Almighty when I didn't have very much bargaining power, so that's how I got hooked," he told CNN in 2010.

Prior to his time atop the Manhattan District Attorney's Office, he served nine years as US attorney for the Southern District of New York. When he retired as district attorney on the last day of 2009, his DA's office had 500-plus lawyers who handled about 100,000 cases each year.

The 'gold standard of prosecutors'

Political and legal figures in New York, including Gov. Andrew Cuomo, Mayor Bill de Blasio and former US Attorney Preet Bharara, praised him in the wake of his death.

"As New York City's longest serving District Attorney, he presided over an era of extraordinary transformation and inspired generations of public servants," de Blasio said in a statement. "We simply wouldn't be the safest big city in America today if not for Morgenthau's decades of dedicated service. His memory will live on as we continue striving toward a fairer criminal justice system."

Gov. Cuomo praised Morgenthau as a "true New York hero whose dedication to public service and the law was matched only by the impact he had on the young prosecutors and lawyers like me who worked for him," he wrote in a statement.

Cuomo called him the "gold standard of prosecutors" and directed flags on state government buildings to be lowered to half-staff on Wednesday until his internment.

"This is terribly sad. Robert Morgenthau, former SDNY US Attorney and Manhattan DA, was an unparalleled patriot, veteran, prosecutor, public servant. He gave his whole life to service. RIP," Bharara said on Twitter.

NYPD Police Commissioner James P. O'Neill said on Twitter that Morgenthau "was the most innovative prosecutor in NYC history. No one did more over a lifetime to serve the public. His vigorous prosecutions helped push the murder rate down 90% during his 35 years in office, which made our great city safer for all," he said.

Hi: 52° Lo: 34°
Feels Like: 34°
More Weather
Rain showers continue through the morning and early afternoon on Monday. Once they pass, our winds shift back to the north and pick up speed. Afternoon wind gusts could top 25 mph. The winds will usher in cooler temperatures for the first half of the work week, with highs in the middle to upper 30s through Thursday. Then the weekend will warm up dramatically with highs in the 50s.