Despite retiring from her playing career in 2014, two-time grand slam champion Li Na still keeps an eager eye on the tennis world she left behind.

After yet another dramatic Wimbledon, the Chinese superstar is excited by the state of the women's game and is looking forward to what will be an intriguing US Open next month.

Much of her excitement is down to the emerging talents breaking through -- primarily 15-year-old sensation Cori "Coco" Gauff.

The American became a household name thanks to her heroics at Wimbledon this year where she became the youngest player to win a singles match since 1991 after defeating idol Venus Williams.

Despite losing out to eventual champion Simona Halep, Li believes the future can be bright for the teenager having been impressed with her mentality and ball striking ability.

However, the newly inducted Hall of Famer cautions Gauff needs time to develop both as a person and a player.

"Right now is very tough for her and of course for the parents as well," Li told CNN Sport's Christina MacFarlane.

"She likes tennis but at the same time she has to be in school. So, you have to find the balance."

Gauff is likely to be invited to the main draw of the upcoming US Open but, despite the huge home support which will undoubtedly greet the youngster, Li says it may take time before we see the best of the precocious talent.

"I think she is amazing," added Li, predicting Gauff could win a grand slam in three to four years "if she's strong enough and hungry about the title."

It's not just the young American exciting Li from the current roster of players. Further along in her development is Japanese sensation Naomi Osaka.

The 21-year-old has enjoyed an incredible 12 months, winning the US Open in 2018 before backing it up with victory at the Australian Open in January.

"She's a little bit like Serena [Williams]," said Li. "You can see she's still young, but I really like the way she's on the court poker-faced. She just fights."

Osaka was dumped out in the first round of Wimbledon and has fallen to second in the world but will be back playing on her favored hard courts in the next two grand slams.

"When she is number one in the world, she's got pressure," added the 2014 Australian Open champion. "But I still believe she will be back soon."

READ: Li Na Land, reality TV and fashion
READ: How Li Na and the Wuhan Open took on the world

Should both Gauff and Osaka need a role model to help guide them through the start of their careers, then they need look no further than Serena Williams.

The 37-year-old reached her 11th Wimbledon singles final this year as she continues her return to the game following childbirth and a battle with injury.

Despite falling just short of a record equaling 24th grand slam title, after losing to Halep in this year's Wimbledon final, Li believes the American has a big chance to succeed at the US Open later this year.

In addition to becoming the most dominant player of her generation, Li is also astonished by her former opponent's ability to balance her professional career with being a mom.

"Sometimes when I was watching her play on the court, I would think about how she could find the balance between family and tennis," she said, wanting to spend every minute with her own children.

Just like Williams, Li hopes she can become a role model for the next generation of tennis players and intends to setup a tennis academy one day.

She also wants to continue the development of the sport in China and hopes her multiple television appearances and new autobiographical film can continue to raise its popularity.

"When I would pick up the racket, I just kept going," Li said, in a message to young players around the world.

"Don't give up and one day, for sure, your dreams will come true. Believe in yourself, you're much stronger than you thought."

Hi: 85° Lo: 65°
Feels Like: 72°
More Weather
Storm chances return Monday and increase into Monday night for northwest Missouri and northeast Kansas. The region could see a few strong storms and heavy rainfall. Temperatures will rise into the upper 80s.

2 seriously hurt in shooting near 20th & Messanie in St. Joseph

Police respond to shooting at 14th and Messanie Streets 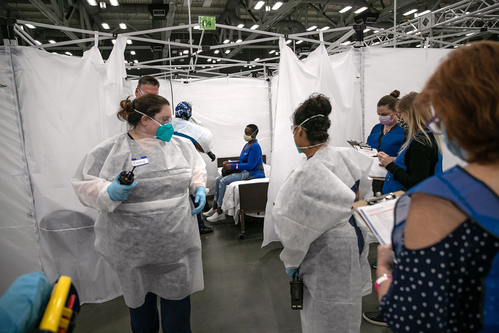 US tops 5 million Covid-19 cases, with five states making up more than 40% of tally