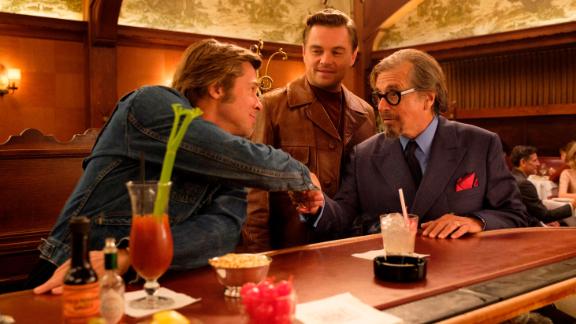 Leonardo DiCaprio, Brad Pitt and Margot Robbie star in 'Once Upon a Time in Hollywood,' Quentin Tarantino's ode to Tinseltown in the late 1960s.

For Quentin Tarantino, time travel is entirely possible. And it didn't take green screens or computer generated backdrops to make it back to 1969-era Los Angeles. All it required were fond, vivid memories of the time, an exhausting attention to period detail and a production designer like Barbara Ling.

The filmmaker was determined that the environments featured in his ninth film "Once Upon a Time ... in Hollywood" as tactile and immersive as humanly possible without turning to the now-ubiquitous digital effects houses, says Ling, who lavishly and convincingly resurrects a period some 50 years gone: the then-vibrant storefronts of Hollywood Boulevard, the classic movie theaters of Westwood Village, enduring eateries like Musso & Frank Grill and El Coyote, the Playboy Mansion, and the Charles Manson family inhabited ranch where Westerns were shot.

"Quentin is so not into digital or CGI," Ling, whose film credits include "The Doors," "Falling Down" and "Batman Forever," told CNN. "He's not someone who wants to do performance in front of green screen. He wants to see the real deal. To me, that is, of course, the absolute best way. It's the hardest way, but you actually get a real 3-D world that's not hazy, so to speak, or that you have to keep people at a certain distance. You're not dealing with green screens. You're dealing with real streets and real people and real everything...He loves the real world, so you can actually see it and smell it and touch it."

"There just is something amazing when it all comes to life, and the vehicles come out, and every extra is dressed. You just go, 'Wow -- I'm here. I'm back,'" she said.

"It was really like we were kind of living in this other time," admitted actress Harley Quinn Smith, who plays one of Charles Manson's followers, recalling a shooting experience so immersive that cast and crew had to adhere to a strict no cell phones policy. "Every day when I went home it felt so weird and wrong, almost."

Historian Alison Martino, who founded and curates the popular Vintage Los Angeles social media accounts that explore the region's past, grew up in the era immediately after that featured in the film and made a point to visit Hollywood Boulevard during its retro transformation for Tarantino's film. She found the flashback quality almost overwhelming.

"It was a time capsule, and it also kind of screwed with my brain, because 'Oh my God -- I remember seeing that when I was a kid!" Martino said. "It was like a reflection of my memory, and it was just perfection."

Martino was astounded at the level of specific detail that Tarantino had insisted on. "There was a record store called Peaches Records, which was one of my favorite stores growing up in Hollywood, and he put it back exactly at the same address," she said. "The window displays were back to 1969 -- the records were in the windows, everything from Troubadour flyers to Fillmore posters, black light posters. You had Thom McCan shoe store that was put back with the [era-specific] moccasins in them. The Pussycat Theater -- that's been gone for many, many years, so he put that back exactly the way it used to look. He had the Vogue Theater looking exactly like it did, had movies from 1969 written on the marquee. Everywhere you turned on Hollywood Boulevard was something from 1969."

"I was overwhelmed, because it's exactly the Hollywood I remember," said Martino.

The experience was also a trip down memory lane for Ling herself. "I remembered so much because I'm an Angeleno and was in around '69," Ling reveals. She and her team were also both meticulously recreating the L.A. of Tarantino's own youth, as the filmmaker moved to the Torrance area in 1966 at age three and spent his formative years exploring the many corners like the nooks and crannies of Hollywood Boulevard.

"Hollywood Boulevard was an amazing mix of things," she said. "You went shopping on Hollywood Boulevard, you got clothes there, you got shoes at Thom McAn, you could get a tattoo...These things like that absolutely fabulous little Orange Julius store that was right next to the Vogue, all those things which do give it texture and life besides the big-ticket items."

"The fun was really getting those detailed textural shops that you just kind of forgot about," added Ling. "Once you started recreating them, your mind just went, 'Oh yeah -- I remember walking in that door.' The neat part of it was actually rediscovering, myself, things that I had long forgotten."

One centerpiece of the film that required little recreation effort is the venerable Musso & Frank Grill on Hollywood Boulevard, which celebrates its 100th birthday in September. Through its century the enduringly posh restaurant has served meals and cocktails to everyone from Charlie Chaplin to Steve McQueen to Tarantino himself (he's a regular), and regardless of however changing times have impacted the street around it, Musso & Frank has been an little-changing mainstay. In the film it's where Leonardo DiCaprio and Brad Pitt's characters, actor Rick Dalton and his stuntman/Man Friday Cliff Booth, meet a veteran agent played by Al Pacino.

"[Musso & Frank] never did go in and renovate the interior to be something modern -- they kept their interior the same interior," said Ling, who noted that the longtime waiters and busboys, many of whom have worked there for up to 40 years, were helpful in zeroing in on the tiniest details.

"They were like 'Oh no, we have the other dishes -- these dishes were out in '69,'" she said. "Anything that didn't we quite recreate, they had it in the back room. 'We have the dishes from that. We have the glasses that we used.' The fun was really working with them and being able to really show the space as it was, this thriving, fabulous, red-boothed walls. To me, it's a miracle it's still there, and it's fabulous."

"One thing that we've never done in this restaurant is change," said Mark Echeverria, the fourth generation family member who currently owns and manages Musso & Frank. "One of the reasons why Quentin personally is drawn to the restaurant is because he loves that kind of antiquity...We're timeless, and so we didn't have to go dig through a bunch of archives to find what the servers were wearing or what the tables looked like."

Echeverria said his team did dip into their records to find an authentic menu from 1969 at Tarantino's request, to be reproduced for the actors for authenticity, even though the menus never appear in close-up. He now has his own reproduction keepsake. "It was neat to see the level of detail that Quentin and Barbara were wanting to go to," he said. "And that made us comfortable that these guys got it. They know what's up."

Hi: 32° Lo: 18°
Feels Like: 20°
More Weather
**Winter Weather Advisory in effect from late Thursday night through Friday afternoon A storm system heading our way for Thursday night and Friday morning will bring us a mixture of snow, freezing rain, and rain across northeast Kansas and northwest Missouri.

4 injured in collision at I-29 and Frederick intersection

Common but potentially deadly respiratory virus on the rise