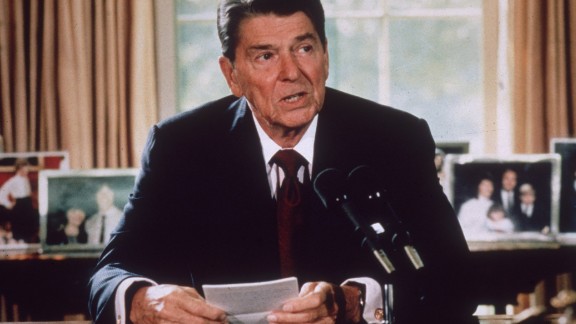 In a newly unearthed audio clip, then-California Gov. Ronald Reagan disparaged "monkeys" from African countries in a phone call with then-President Richard Nixon, according to the former director of Nixon's presidential library.

The release by the National Archives of a racist telephone conversation between President Richard Nixon and future President Ronald Reagan (then-governor of California) casts a strobe light on an uncomfortable fact: One of our most popular Presidents was far from the only commander-in-chief to display racial bigotry.

Reagan's description of Tanzanian delegates as "monkeys" still not comfortable wearing Western clothes, most notably shoes, offers a substantive illustration of what civil rights activists long alleged was a pattern of Reagan's anti-black racism, both as governor of California and President of the United States.

Nixon, whose own enmity towards African Americans helped propel him to the White House as the coded champion of "law and order," used Reagan's words on the call to offer his own distaste for African leaders who dared challenge the West on geopolitical matters.

If all of this sounds depressingly familiar, it should. President Donald Trump's tenure in the White House remains most notable for his consistent attacks on black and brown people, Americans and global citizens through rhetoric that has demonized and dehumanized entire populations, countries, regions and cities, with the city of Baltimore being only the latest target.

For some, Reagan's words will come as a surprise. Ronald Reagan, America's 40th President, is perhaps most fondly remembered as the former B-movie actor turned swaggering hero of the conservative right. But it shouldn't be a surprise.

In the 1960s Reagan tried to suppress teaching and protests by figures on the black left like Angela Davis, Eldridge Cleaver and student protesters at San Francisco State and elsewhere. He also famously supported a ban on open carry for loaded firearms as governor of California (only after the Black Panthers publicly asserted their right to armed self-defense) and in the 1970s he introduced the racially toxic phrase "welfare queen" into the lexicon of American politics.

If Richard Nixon opened up the Pandora's box of racially coded political rhetoric that cemented the Republican Party's "Southern strategy" of appealing to white voters turned off by the talk of civil rights, busing, and urban rebellion, Reagan offered the entire nation a telegenic icon who professed to have no public feelings of racial animus but an unflinching love for American exceptionalism and all of its accoutrements.

Reagan's racial politics proved to be both substantive and symbolic. His 1980 campaign appearance in Neshoba County, Mississippi (near the site of the notorious murders of civil rights activists Andrew Goodman, Michael Schwerner, and James Chaney in 1964) signaled to white voters where his allegiance lay on matters of racial justice. The Reagan Revolution's reliance on trickle-down economics, promotion of the Drug War in urban communities, and policy assault on the Great Society devastated poor black and brown communities who were unable to participate in the booming economy of the 1980s.

Perhaps most infamously, Reagan inspired a new generation of political conservatives (from religious Christians to think-tank academic ideologues to federal judges) who argued and struck down legal and legislative remedies that sought to promote racial justice in American democratic institutions. Appointing future Supreme Court Justice Clarence Thomas to the head the Equal Employment Opportunity Commission proved the tip of the iceberg for the Reagan administration's civil rights policies, which found the White House on the wrong side of virtually every single racial justice issue (from crime policy to racial apartheid in South Africa) except for one. Reagan signed the Martin Luther King Jr. federal holiday into law in 1983 well aware that any veto would have been overridden by Congress. The national embrace of King during the 1980s under a President whose policies were antithetical to the civil rights leaders' greatest political commitments and boldest dreams reflects an ever-present tension between race and democracy in America.

Whereas Reagan symbolically demonstrated his attention to the legacy of racial injustice through the passage of the King holiday, Donald Trump has gone in an entirely different direction. President Trump's recent visit to Jamestown, Virginia, where he extolled the virtues of democracy while virtually ignoring the labor of enslaved Africans who made colonial North America and its evolution into the United States possible, offers us the opportunity to re-examine the often fraught relationship between race and the presidency. Trump neither possesses President Nixon's voracious political instincts nor President Reagan's public air of dignified elegance -- yet all three have more in common on race matters than many would care to admit.

Hi: 31° Lo: 14°
Feels Like: 20°
More Weather
Skies are expected to remain cloudy tonight and into Thursday morning. Sunshine returns to the area by Thursday afternoon and that will allow temperatures to warm up into the mid to upper 30's Temperatures will continue to be on the warm side with high temperatures reaching into the upper 40's by the end of the week. Over the weekend we will see a chance for rain and warmer temperatures with highs in the lower 50's.

U.S. Marshals searching for wanted man believed to be in St. Joseph area

SJSD cancels in-person classes for Wednesday due to weather conditions