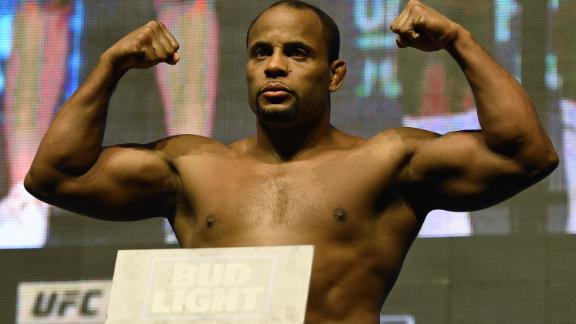 Welcome to our final weekend sports guide -- without college football.

Yes, a cheeky start, but next week kicks off five straight months of college football that will dominate your Saturdays. It will culminate in mid-January with the National Championship in the Big Easy.

So while we still can, let's take some time to highlight three non-college football events happening this weekend:

If you ask a casual sports fans who Nate Diaz is, the usual reaction is a pursing of the eyes. The name resonates, but the details are fuzzy.

Diaz is the man who knocked Conor McGregor off his perch when the brash Irishman was at the pinnacle of the mixed martial arts mountain.

The shocking 2016 upset was quickly followed by a rematch later that year at UFC 202, which McGregor won via a majority decision.

Then, poof! Diaz disappeared from the octagon and the mainstream.

It's been almost three years since Diaz has been featured on a fight card. He told ESPN this week that after his rematch loss to McGregor, UFC essentially wanted him to "get out of here." UFC President Dana White disputes the claim.

Giant-killer Diaz returns to the octagon (probably with a chip on his shoulder) on Saturday night to face Anthony Pettis at UFC 241.

Despite the hyped Diaz resurrection, the Pettis bout isn't the headliner. That honor belongs to Daniel Cormier and Stipe Miocic, who will go toe-to-toe for a second time. The first edition ended with Cormier knocking Miocic out within five minutes and leaving the building with the Clevelander's belt.

Cormier -- who is the UFC heavyweight champion, the No. 1-ranked pound-for-pound fighter in the world and the first and only UFC fighter to defend titles in two weight classes -- says Saturday's fight could be his last.

When asked about retirement, Cormier told CNN on Thursday that "everybody asks about it, but that's what happens when you turn 40. I feel great. I wanna get through this weekend, and then I'll sit with my family, and we'll figure out what's going on. It's a real thing, though. Father time catches up to everybody."

Sounds like this could be the last time to witness the former Olympian in action. We'll be watching.

Who's fired up for the Little League Baseball World Series? This guy!

The tournament began Thursday, featuring 16 teams from around the world -- eight squads from the United States and eight from other countries -- playing a double-elimination, bracket-style tournament with the champion crowned August 25.

This year's edition is conjuring up memories of pure joy. It's hard to believe that five years have passed since Mo'ne Davis became a national sensation.

Davis, then a 13-year-old pitching phenom, became the first girl to throw a shutout in the Little League World Series. A Sports Illustrated cover, a meeting with the Obamas and a Spike Lee-directed documentary all followed.

Davis' legacy will particularly shine in the coming days at quaint Lamade Stadium in Williamsport, Pennsylvania. Playing second base for Minnesota (representing the Midwest Region) will be Maddy Freking, the first girl to take part in the Little League World Series since Davis, now a freshman at Hampton University, where she pans to play softball in the spring.

Freking will be the 19th girl to take part in the 73-year history of the tournament.

The spotlight on her will probably intensify if the team advances. Her manager, Greg Bloom, is ready to help, telling the Minneapolis Star Tribune, "we told her if [the attention] gets to be too much, just let us know, us coaches, and we'll try to tell people to take a break ... but I've warned her to expect to get a lot of attention. This doesn't happen very often."

After a rainout on Thursday, Freking's team is scheduled to play at 1 p.m. Friday. They will play again Saturday or Sunday.

This midseason night race at iconic Bristol Motor Speedway in Tennessee was already on our must-watch list for this weekend. But after famed NASCAR driver and analyst Dale Earnhardt Jr. and his family escaped serious injury in a fiery plane crash on Thursday, this race takes on special meaning.

Earnhardt, who was slated to be a part of NBC's Saturday night coverage, is now taking the weekend off. But he'll be there in spirit.

Beyond being grateful for Earnhardt's safety, pay attention to the No. 1 and No. 18 rides. Remarkably, the Busch brothers, Kurt and Kyle, have dominated the slingshotting short track, winning 14 times between them.

What really packs 'em in at Bristol is the constant paint swapping that goes down inside the "bullring"; rarely a race goes by without incidents of mayhem. So if you have ever dreamed of turning your evening commute into a NASCAR race -- without the legal ramifications -- the night race at the self-proclaimed "Last Great Colosseum" is for you.

Hi: 26° Lo: 26°
Feels Like: 24°
More Weather
After some clouds this morning we finally started to see some sunshine across northeast Kansas and northwest Missouri today. The next disturbance is heading our way from the southwest and should make it into the area late tonight tonight and tomorrow.