'We're not stuck in our ways,' says PGA Tour commissioner on slow play 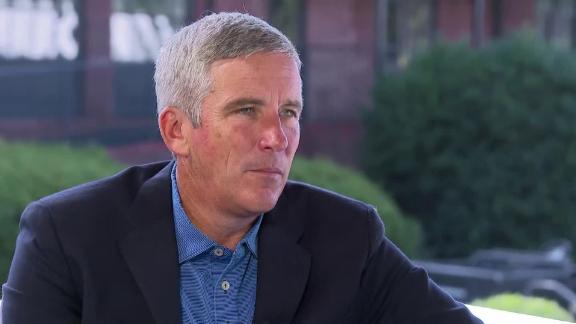 PGA Tour Commissioner Jay Monahan talks to CNN's Patrick Snell about the state of the Tour and the slow play controversy.

Winning a golf tournament has never been more lucrative.

The Masters' winning purse increased to $11 million in 2017. Both the Players Championship and the US Open's winning purse rocketed to $12.5 million last year. The winner of the FedEx Cup gets an eye-watering $15 million.

Yet in recent weeks the sport has undergone something of a crisis of confidence in the slow play of some leading players.

Notably, American Bryson DeChambeau was criticized by his fellow professionals at the Northern Trust event in New Jersey earlier this month.

Shortly afterwards, the European Tour announced new protocols that could see players penalized with penalty strokes for slow play in the future.

"From our stand point, there were over 1.2 million shots that were hit this year," PGA Tour Commissioner Jay Monahan told CNN Sport's Patrick Snell, speaking about possible changes to the game.

"And you have some instances where players are taking too much time. Like everything else in our business, this is something we're always monitoring."

He continued: "We are not stuck in our ways. We know that players all over the world are watching the best players in the world on the PGA Tour and the LPGA Tour, and they mimic their actions.

"And so, if there is an opportunity for us to make a positive contribution to the game and continue to elevate our product, that's what we're going to do."

With the increasing influence of social media and the world moving at a faster place, attention spans are also arguably getting shorter.

"When you look at pace of play and you look at the way the world is changing and the requirement that everything happen faster than it did in the past, it's something we've been looking at," Monahan added.

"We've been looking at it since February 2019. We're talking to our players and our players advisory council and we're going to use this as an opportunity to improve. It's not about any individual player.

"It's about our organization putting a system in place that allows us to improve and ultimately helps excite those people that are going to watch and mimic the great players in the world, their pre-shot routines, how they approach the game.

"But not everything is going to be perfect and you've got to identify the areas you can improve and that's what we're doing."

Despite the issue of slow play, there have been some thrilling story lines throughout this season that have had viewers gripped.

From Tiger Woods' remarkable comeback to win the Masters, to Brooks Koepka transforming into the sport's newest superstar, and Shane Lowry's fairy tale Open win at Royal Portrush, it has made for exciting viewing.

And Monahan says golf as a sport is in a good place.

"The way we look at this new schedule is we're in a season of championships, starting in March with the Players all the way through the Open Championship in July which then leads us into the FedEx Cup Playoffs," Monahan said.

"So, if you look at the champions we've had from this year, from Rory McIlroy to Tiger Woods to Brooks Koepka to Gary Woodland to Shane Lowry, and you think about the quality of those championships, the championships themselves were inspiring and extraordinary.

"And they've all grown. Those championships continue to thrive. And what you're seeing as we get into the season of championships and the FedEx Cup Playoffs is more eyeballs and more energy on our sport as we continue to try and play our roll to raise our sport up and go forwards.

"What a year. Think about each one of those events I just mentioned and those champions and what they did to get there and the excitement around it. You've got to be feeling really good about where we're heading."

Hi: 26° Lo: 26°
Feels Like: 20°
More Weather
After some clouds this morning we finally started to see some sunshine across northeast Kansas and northwest Missouri today. The next disturbance is heading our way from the southwest and should make it into the area late tonight tonight and tomorrow.