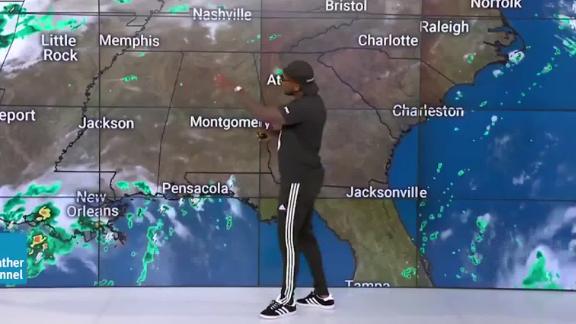 Atlanta-based rapper Jeezy, aka the Snowman, made a guest appearance on the Weather Channel, also located in Atlanta, to promote his new album, "TM104: The Legend of the Snowman." He predicted a high chance of snow in August for the southern city.

Atlanta has a new meteorologist, and he's predicting a high chance of snow. In Atlanta. In August.

The Atlanta-based rapper Jeezy, aka the Snowman, made a guest appearance on the Weather Channel, also located in Atlanta, on Friday to promote his new album, "TM104: The Legend of the Snowman."

As he informed the city's residents about the high temperatures expected Friday evening, he made a plug for his latest release.

"... Around that time it's going to get to snowing because my album is in the streets and I am the snowman, Atlanta, Georgia. Thank you all for watching," he said.

For the uninitiated, Jeezy isn't called the Snowman because he has an affinity for winter landscapes.

The nickname is a coded reference to the rapper's self-admitted past as a cocaine dealer.

Jeezy started sporting the logo of an angry snowman, with downward-slanted eyebrows and a straight line for a mouth, as he was emerging as a star in mainstream hip-hop in 2005.

He wore a snowman medallion on his mixtape "Trap or Die," released in January of that year. Soon enough, people were calling him "Snowman."

In a campaign to broaden Jeezy's appeal outside the South, former Def Jam marketing director Ashaunna Ayars told Genius that she sketched a version of the snowman to be printed onto T-shirts. As Jeezy's popularity soared, so did the demand for the T-shirts, inspiring copious bootleg versions as well as bans in schools across the country.

Hi: 26° Lo: 26°
Feels Like: 22°
More Weather
After some clouds this morning we finally started to see some sunshine across northeast Kansas and northwest Missouri today. The next disturbance is heading our way from the southwest and should make it into the area late tonight tonight and tomorrow.