Where Trump failed, Macron may have succeeded 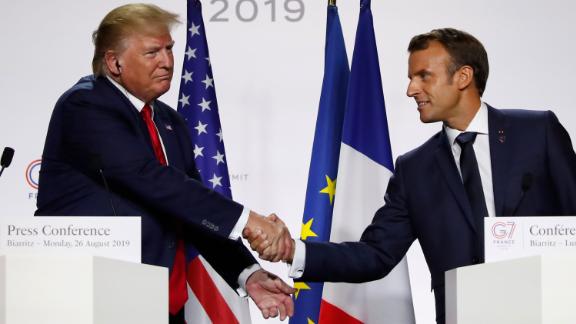 During the G7 summit in Biarritz, France, President Donald Trump and French President Emmanuel Macron told press that they are in talks to revamp rules on world trade, and Trump believes China is sincere about wanting to make a trade deal.

The G7 could have been the best group date that President Donald Trump ever had.

With leaders from the world's most powerful countries all gathered in one place, Trump could have used his time in Biarritz, France, to address fears of economic recession and a roster of rogue actors threatening democracy. Instead Trump stuck to his usual talking points -- criticizing the media, expressing his desire for Russia to be included in future summits and all but ignoring climate change.

Meanwhile, the other leaders in attendance, many of whom no longer view the US President as the leader of the free world, did their best to navigate around him -- and with some degree of success.

French Prime Minister Emmanuel Macron was one such world leader -- who, in an effort to salvage as much of the Iran nuclear deal as possible, invited Iranian Foreign Minister Mohammad Javad Zarif to attend the summit.

Iran's malign activity has been a repeat topic for decades. Previous G7 and G8 summits have included discussions about how to stop Iran's destabilizing behavior -- from their illegal nuclear program to support for terrorism, and more. This time, however, Iran was a part of the conversation.

In light of Trump's decision to withdraw from the Iran nuclear deal, other G7 leaders have been working together to figure out how to comply with US standards on sanctions and maintain some semblance of the nuclear deal. Many countries want the United States to grant them sanctions waivers so that they can conduct transactions with Iran, or at least transfer Iran funds for humanitarian purposes.

At the summit, Macron took on a larger role in navigating this difficult balancing act. Acting as the mediator between the US and Iran, Macron attempted to build a French connection between the two countries.

And he did so very carefully. Knowing that Trump likes made-for-TV moments, he brought Zarif to the summit. While Zarif didn't meet with Trump, his presence on the ground -- in such close proximity to the President -- made it easier for Macron to engage in shuttle diplomacy between the two leaders.

Though Trump was quick to say that France does not speak on behalf of the United States, there are signs Trump may be more amenable to resuming talks with Zarif and company. The Trump administration has more recently backtracked on its previous preconditions for talking to Iran. And US Secretary of the Treasury Steve Mnuchin reaffirmed this weekend that the US has no preconditions.

Meanwhile, Macron claimed that post-summit, Iranian President Hassan Rouhani is now willing to meet with any political leader, including Trump.

But the devil is in the details. After Trump withdrew from the nuclear deal, Iranian Supreme Leader Ayatollah Khamenei criticized Zarif for his handling of the nuclear deal and said he won't negotiate with the US. It's unclear what preconditions Iran has for sitting down with Trump, including whether Iran will insist on some sanctions relief before coming to the table.

We also know that Trump prefers to rely on his perceived personal rapport with leaders like North Korean leader Kim Jong Un and Russian President Vladimir Putin -- rather than listening to or empowering his experts. So, even if Macron sets up a meeting, its success will depend on whether Trump does something different in terms of preparation and internal teamwork.

In the short term, though, because of Macron's rapport with the Iranians, Trump may want to consider allowing Macron to serve as an intermediary -- at least for now -- while putting his team to work to figure out the best way forward.

The G6 (now the G7) was created so that leaders could address global crises together. Initially, it was the oil crisis in 1975, and today it's the disruptions caused by issues like ongoing trade wars. The real difference today, however, is that the United States -- the country that used to lead efforts to confront global challenges -- is the cause of many of them. That likely led other G6 leaders to coordinate efforts to confront Trump on his destabilizing behavior.

Other leaders, including outgoing Italian Prime Minister Giuseppe Conte, who is seen as friendly with Trump, warned against trade protectionism. And UK Prime Minister Boris Johnson said that the US should lower its trade barriers.

Perhaps Conte and Johnson got through to Trump this weekend. He struck a more conciliatory tone on China at the end of the summit, saying Chinese President Xi Jinping is a great leader and that a deal is still possible.

His decision to walk back his ire against China after talks with world leaders may be a signal that he's more willing to listen to their assessments on the benefits of resolving the trade war than he is the assessments of his home team.

G7 leaders' efforts to change the President's posture on our trade war with China -- which inevitably impacts their economies, too -- could open the door to more constructive talks, especially if other leaders are carrying the same message to Beijing and pressuring the Chinese to negotiate. There is strength in numbers, and a coordinated approach by other G7 leaders may yield at least a trade war truce in the short term.

While Trump praised the great unity at this year's G7, Trump's never been a fan of coordination -- whether multilaterally through the UN or internally with his own team. But other G6 leaders may have managed to get Trump to do something unusual -- coordinate with them on issues like the US posture toward China and Iran.

Trump, however, shouldn't have to be managed. He should be an active participant in moving issues forward and providing leadership where he can. To do so, he is going to have to take some cues from his peers and coordinate with other leaders -- rather than insulting them or trying to bully them into submission.

Hi: 61° Lo: 46°
Feels Like: 40°
More Weather
A few sprinkles will be possible through the morning and afternoon hours due to the cold front. Most of today will be dry and sunny with highs in the upper 60s and lower 70s. Winds will remain on the breezy side with gusts up to 25 mph. Highs will be in the 60s throughout the rest of the work week with dry and sunny conditions. Rain chances will start to increase overnight Saturday into Sunday. Conditions will start to dry out on Monday with highs back in the 70s.

St. Joseph man sentenced to 30 years in prison for 2020 murder

Son steps up to save Hiawatha restaurant's future