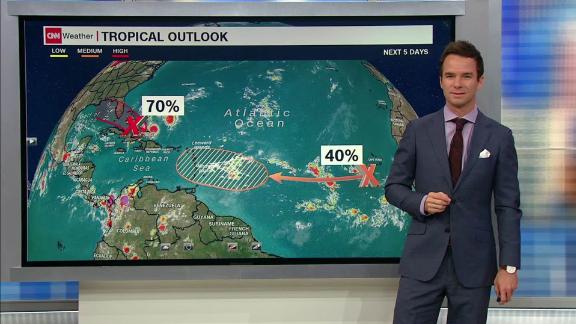 The tropics continue to be active as we continue to monitor an area of low pressure near the Turks and Caicos. This system could potentially be our next named Atlantic storm as well as bring rain to an area already devastated by Hurricane Dorian. Derek Van Dam has the latest forecast.

Triple Crown winner Justify reportedly failed a drug test before the Kentucky Derby last year (which should have merited a disqualification) but was allowed to compete anyway.

Here's what else you need to know to Get Up to Speed and Out the Door. (You can also get "5 Things You Need to Know Today" delivered to your inbox daily. Sign up here.)

The White House gets a big victory on immigration from the Supreme Court. A Trump administration rule that dramatically limits the ability of Central American migrants to claim asylum can go into effect nationwide, the court said, even while legal challenges to it are still alive. The rule essentially bars people traveling through Mexico from being able to claim asylum at the US border. Meantime, the President's son-in-law, Jared Kushner, met with Senate Republicans to try to get them on board with the White House's proposal to overhaul legal immigration, though many seemed skeptical.

It's Debate Night in America (again). The third Democratic presidential debate is tonight in Houston, and it'll only be a one-night affair. The debate field was whittled down to 10 candidates because the presidential hopefuls had to reach polling and fundraising benchmarks to quality (and many didn't). Tonight's big draw: seeing Joe Biden and Elizabeth Warren side by side on a debate stage for the first time. Biden's advisers say the former veep will take it to Warren, saying the Dems need to nominate someone who can offer up "more than plans." Also, the candidates have been warned not to curse. Wait, what?

The number of people listed as missing in the Bahamas after Hurricane Dorian stands at about 2,500. Government officials stress, though, that the list is preliminary and may include the names of people who have already been evacuated. Right now, the official death toll in the Bahamas is at 50. But that is expected to rise as search-and-rescue teams work their way through the parts of Grand Bahama and Abaco islands that were flattened by the hurricane. Meanwhile, meteorologists are keeping their eyes on two more tropical disturbances that could impact areas already devastated by Dorian.

There's a small ceasefire right now in the trade war, and the markets are reacting positively. China announced yesterday it would waive tariffs on some US goods, the first time it's done that since the start of the trade war. President Trump responded by saying he's pushing back new tariffs on Chinese goods set to go into effect October 1 to October 15. Asian stocks rose slightly on the moves, and US market futures gained a little, as well. Economists think weak economic data from both countries will eventually force them to work out some kind of deal on trade.

A married couple accused of killing a man and then escaping custody have been apprehended in Arizona.

A maverick investor who helped shape the US energy industry has died. T. Boone Pickens, a legendary oil man, passed away yesterday at age 91.

Not nougat and caramel

So, what's floating around at the center of our Milky Way galaxy, you ask? Giant balloons, apparently.

If you're looking to cut down on the amount of time you spend in front of screens, don't drive this car. It has a screen in the steering wheel.

This Connecticut man spent his whole life making others laugh. So, of course, his family honored him with a comedic obituary when he died.

So fresh, so clean

Singer The Weeknd, known for his signature beard and hi-top fade, is sporting a more clean-cut look now, and the internet is just losing its mind over it.

"They were talking about ... how Hollywood ladies are so silly, and especially that Renée Zellweger."

Actress Renée Zellweger, recalling the "painful" moment she overheard strangers on a London train negatively talking about her looks

She's paying attention to the cat, and the dog is not having it. (Click to view.)

Hi: 36° Lo: 25°
Feels Like: 28°
More Weather
After fog across northeast Kansas and northwest Missouri this morning we did see the sun for just a few minutes today but quickly the clouds moved back into the area and that helped keep our temperatures in the 30's. The clouds will stay with us overnight and on Tuesday with temperatures staying in the mid 30's for highs.

KQ2 Forecast: A foggy start to the week