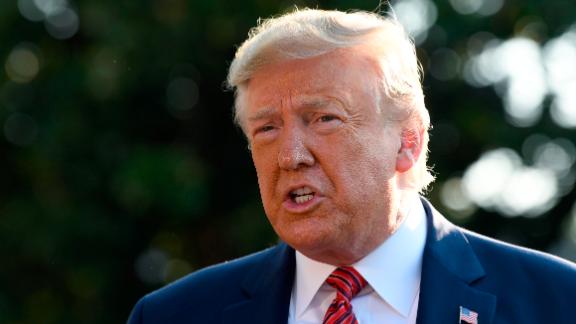 President Donald Trump acknowledged that he discussed former Vice President Joe Biden in a call with Ukraine's president, as Democrats strengthened calls for an investigation into Trump's contact with the foreign leader. CNN's Joe Johns reports.

After a brief cessation of hostilities against the United States' intelligence and law enforcement community, President Donald Trump is once again gearing up to do battle. He is dusting off his old playbook and employing many of the same tactics he relied on to counter past allegations of wrongdoing.

The question this week is whether the President and his personal lawyer, Rudy Giuliani, abused the power of the executive office to pressure Ukraine into investigating former Vice President Joe Biden, who remains a top-tier candidate for the Democratic presidential nomination, making him a political rival of the President.

Reports of Trump's conversations with the Ukrainian president come as a whistleblower from the intelligence community has filed an official complaint with the inspector general related to the call, a person familiar with the matter tells CNN.

The inspector general concluded that the whistleblower complaint was "credible" and "urgent" — a level of seriousness that requires the Justice Department to notify Congress. The IG followed this protocol by forwarding the whistleblower's report to Joseph Maguire, the acting director of national intelligence, who has refused to share it with Congress. On Monday, Trump laid into the government whistleblower, questioning the person's nationality and suggested that it is anti-American to report suspected abuses by a president.

Only two months have passed since Special Counsel Robert Mueller appeared before Congress, concluding a nearly two-year-long investigation into whether members of the Trump campaign conspired with Russia to influence the 2016 election. Although many people have gone to prison over charges stemming from the special counsel's probe, no one was ultimately charged with conspiracy with Russia, despite at least one documented attempt by Team Trump to accept political dirt from a foreign adversary.

During the course of Mueller's investigation, the President and his allies engaged in a full-throated assault on the institutions of power that were investigating Trump's inner circle, working to discredit the men and women charged with safeguarding America against foreign threats.

As I write in my new book, "Crossfire Hurricane: Inside Donald Trump's War on the FBI," the President blamed investigators for conducting a "witch hunt," and for being "deep state" operatives working to undermine his presidency. Without evidence, he claimed the FBI had inserted a "spy" into his campaign for sinister political purposes and castigated former President Barack Obama for allegedly ordering the wiretapping of Trump Tower.

Many national security experts, including me, believe Trump's goal in these baseless attacks was to help soften the blow of whatever might eventually come from Mueller's findings.

In the latest scandal, involving Trump's dealings with Ukraine, the President is drawing from the same playbook he used in his earlier attacks against the intelligence community: initially claim no knowledge of allegations of wrongdoing, eventually deny those allegations, claim that whatever was originally being described was actually innocent, and then wage war against those doing the investigating.

During the Russia investigation, Trump and his allies insisted that Mueller and his team were partisan operatives with an agenda, even though the key players involved in that case -- Deputy Attorney General Rod Rosenstein, FBI Director James Comey, FBI Deputy Director Andrew McCabe and even Mueller himself -- were all Republicans.

President Trump has already started muddying the waters in the latest Ukrainian scandal, publicly blasting the whistleblower as a "partisan," even though Trump admitted in the same setting that he doesn't know who the person is. The president denied knowing which phone call media reports were even referring to, and then minutes later described the same call as having been "beautiful." And, of course, he has returned to a familiar lexicon, labeling the latest incident as "the Ukraine witch hunt."

As I have tried to warn the public ever since Trump's initial attacks on the FBI and Justice Department during the Russia probe, the President's efforts to undermine our institutions of justice pose real consequences to public safety. For example, FBI agents and intelligence officers rely on the public to help gather leads and serve as informants. A lack of public trust might mean fewer people will come forward to help guard against threats.

Furthermore, US intelligence agencies have the life-and-death responsibility of advising policymakers on serious threats to US national security. Political attacks on these agencies' credibility will only serve to undermine their effectiveness in the eyes of lawmakers and the public they serve. If any president destroys that precious trust with the American people for nefarious political purposes, that president risks undermining democracy.

Trump may be lashing out because he has been backed into a corner, but publicly degrading people inside the intelligence community because their good-faith efforts threaten his political survival is no excuse for the war he wages.

As I write in my book, we have seen real intelligence abuses in the past. Throughout the 1960s and 1970s, the FBI and CIA engaged in gross violations of civil liberties in the name of national security. Innocent Americans were wiretapped without court authorization and spied on, as intelligence bureaus sought to determine their national and political allegiances.

What followed was systematic and wholesale reformative change by lawmakers once these abuses came to light. Congress passed new laws rein in the intelligence community and ensure effective oversight by the legislative branch. The distrust in intelligence and law enforcement in the wake of those scandals has taken decades to reverse.

If President Trump is successful at convincing his base that the intelligence community today is still untrustworthy, he will succeed in undermining these critical institutions in a way that might take a generation to repair.

Hi: 83° Lo: 55°
Feels Like: 60°
More Weather
The forecast for today will be very similar to yesterday, but just a couple degrees warmer although we are still staying relatively cool for this time in August. The air quality is much better today with the haze starting to clear out of the area. Tonight will be cool and calm with lows in the mid 60s and light winds. There is a slight chance for isolated showers tonight and tomorrow afternoon, although most of the area should stay dry. Dry and sunny conditions continue into the weekend as temperatures start to warm up again. Highs look to stay in the 80s until midweek and then start to climb into the 90s as we head into the weekend.

St. Louis couple who pointed guns at protesters from their front yard pardoned by Gov. Parson