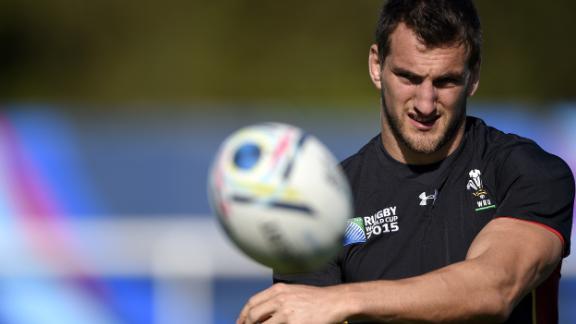 Former Wales captain Sam Warburton says his country's Rugby World Cup campaign would be considered a success if the team reaches the final.

Scotland set up a thrilling finale to Group A in the Rugby World Cup after a convincing 34-0 victory over Samoa in Kobe.

The result was much-needed for Gregor Townsend's side, which was lackluster in its opening defeat by Ireland eight days ago.

But a potent attacking display, that was capped off with a late fourth try to secure a bonus point, ensured that this pool will go down to the wire.

Japan's stunning victory over Ireland Saturday means that Scotland likely needs to beat the host side on October 13 to progress to the knockout stages.

Two penalty tries -- the second of which saw Samoa's Ed Fidow sent off for picking up a second yellow card -- and one try each for Sean Maitland and Greig Laidlaw ensured a comfortable Scottish win.

"A massive thanks to all the Scottish fans who are here today and everyone who's supporting us back home as well and sticking with us after last week."

Who goes through from Group A?

It took Scotland half an hour in Kobe to register its first try of the 2019 World Cup, but after that scores came thick and fast.

Maitland touched down first after gathering a pinpoint cross-field kick from Finn Russell, and Laidlaw's conversion, coupled with an earlier penalty from the scrumhalf, gave Scotland a 10-point lead.

Laidlaw was soon on the score sheet again when he bumped off a tackle to go over near the posts after Scotland began a flowing move inside its own half.

A classy, long-range drop goal from Stuart Hogg added further salt to Samoa's wounds before the stroke of halftime as Scotland piled on 17 points in 10 minutes.

Scotland pushed hard for a bonus point throughout the second period and was rewarded with a penalty try on 57 minutes when Fidow prevented Fraser Brown going over from a driving maul.

Fidow was sent to the sin bin and was again penalized when his illegal tackle using only his knees prevented the diving Maitland from grabbing Scotland's fourth. After reviewing the incident, the referee awarded Scotland a second penalty try and Fidow was sent off for his second yellow.

The result means Japan leads Pool A on nine points, ahead of Ireland on six and Scotland and Samoa who both have five.

Japan, Ireland, and Scotland are all expected to beat bottom-placed Russia, while Japan and Ireland are favorites to win against Samoa.

If those games play out to form, then Scotland needs a victory over Japan to stand a chance of reaching the quarterfinals. Whichever team finishes second will likely play reigning champion New Zealand with the top side facing South Africa.

"We were all delighted to get that bonus point," said head coach Townsend.

As for Samoa, the result is a disappointment following an opening 34-9 victory over Russia. The Pacific Islanders became the first side to fail to score a point in a game this tournament, while poor discipline also continued to be a problem.

Samoa played today without center Rey Lee-Lo and hooker Motu Matu'u who both were handed three-match bans for dangerous tackles against Russia. Fidow's two yellow cards against Scotland all but extinguished hopes of a comeback in Kobe, meaning chances of progressing out the group rest on victories against Japan and Ireland.