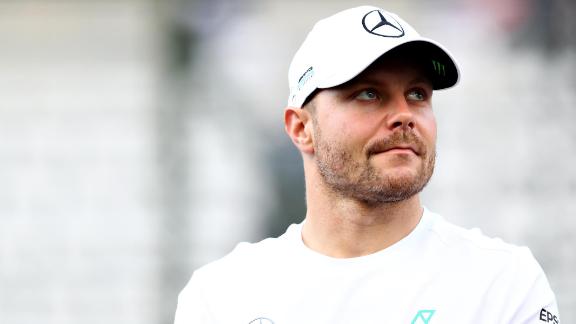 Valtteri Bottas discusses his qualifying goal in Suzuka and risks of Typhoon Hagibis with Amanda Davis.

Like the Rugby World Cup, this weekend's Formula One race in Suzuka is feeling the effects of the fast-approaching Typhoon Hagibis with qualifying moved to race day on Sunday.

Formula 1 bosses said all track activities Saturday have been canceled, meaning qualifying will now take place Sunday morning ahead of the race in the afternoon.

The track has been closed "in the interest of safety for the spectators, competitors and everyone at the Suzuka Circuit," said organizers.

The impending storm has already caused two Rugby World Cup matches scheduled for Saturday to be canceled on safety grounds.

If grid conditions Sunday morning are too difficult to hold qualifying, the results of Friday's second practice session will decide the starting grid positions -- Valtteri Bottas led Lewis Hamilton by 0.1 seconds in a Mercedes one-two.

For Bottas, it's essential for the team to stay focused on the race. He even suggests it can be "sometimes more fun (racing in the wet) than in the dry."

"As a team, we need to be aware that we don't get too distracted by those kind of talks and to follow hundreds of different weather forecasts," Bottas told CNN Sport's Amanda Davies.

"We need to take it as it comes. Obviously, we need to be prepared."

Red Bull team principle Christian Horner admits Sunday will be a busy day for everyone, but says no one will struggle for focus.

"With the qualifying at 10 a.m., there'll be a really fast turnaround for the mechanics to get the cars ready and race prepped," Horner told CNN.

"It's going to be a really busy day. The mechanics will need to get a bit of rest in (on Saturday) ahead of a really long day for them on Sunday."

With five races left on the 2019 Formula One calendar, Bottas is just one podium finish behind his record in a single season.

His second-place finish in last week's Russian Grand Prix was his 12th this term, just one behind his total of 13 in 2017.

Despite his excellent form, he is still 73 points behind Mercedes teammate Hamilton in the race for the drivers' championship in which the Briton is seeking a fifth title in six years.

While time is running out on his own title aspirations, Bottas hasn't given up hope.

"It's not over yet, in theory," he said. "I would need to be very lucky, though.

"I understand that and I'm really realistic about it but no, I haven't thrown in the towel and say, 'that's it.' So, I'm here to fight."

READ: Vietnam Grand Prix organizers made to feel like part of Formula One 'family'

Mercedes has been the dominant power on and off the track in recent years.

The British-based German outfit has won both the drivers' and constructors' championships for the last five years.

It is aiming to draw level with Ferrari's record of six consecutive constructors' championship titles between 1999 and 2004.

And although it is 162 points ahead of second-placed Ferrari, Bottas insists Mercedes is taking nothing for granted.

"First of all, we need to make it happen," the Finn said. "It's not won yet but for sure, it would mean a lot.

"I remember at the factory when we were celebrating the fifth title together, we all agreed as a team, 'let's go pull this together and work hard for it.'

"Now we're close to it but we don't want to getting carried away and think about it yet but it would mean so much for every single team member and for sure, as a driver, it means a lot too."

Not being able to practice on a Saturday at Suzuka isn't out of the ordinary -- it happened at both the 2004 and 2010 Japanese GP due to heavy rain.

To reduce the likelihood of having to miss qualifying, Formula E holds both qualifying and the race on the same day throughout its season.

"I still think you've got to protect the DNA of the sport," the 45-year-old said. "Football still has 22 players, one ball, two goal posts and is mainly played on grass.

"I think for Formula One, qualifying has always been on Saturday. It's about who has the quickest car and race day is on Sunday.

"I think it's what the race consists of, the amounts of pit stops, how the tires degrade etc. We need more variants and that will create better racing."