This footballer was racially abused by a fan ... then banned for six matches 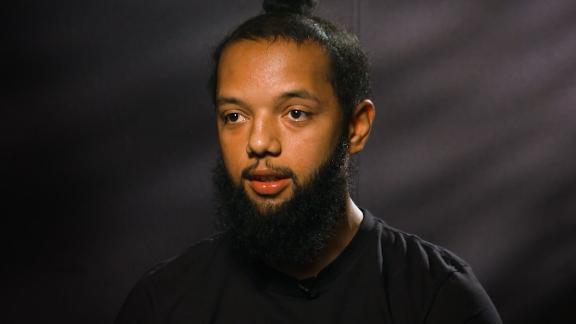 Last season, Linford Harris, a footballer in England's amateur leagues, was banned for six matches despite being the victim of alleged racist abuse.

High-profile incidents of racist abuse at Euro 2020 qualifiers and Premier League matches have garnered huge global attention, but it's a disease that runs deep into the pyramid of English football, even when television cameras are not there to pick it up.

As he was preparing to take a penalty for his Wymeswold team, the player could clearly hear two fans -- at different ends of the pitch -- hurling racist abuse at him.

What made this incident different -- worse, perhaps -- was that the local football association, Leicestershire & Rutland, opted to punish Harris.

Despite an independent disciplinary panel for the English Football Association (FA), which sat on behalf of the Leicestershire & Rutland FA, accepting Harris had been racially abused, he still received a six-match ban and a £90 ($115) fine.

That punishment was levied due to Harris' participation in a mass brawl that prompted the match's abandonment, the panel said.

READ: How the scourge of racism continues to tarnish English football

It said Harris' sanction would have been "considerably higher" had it not been for the "significant mitigating circumstances" of repeated racist abuse.

Harris did not attend the disciplinary hearing as he was working and was "not willing to attend when a change of date was offered," the report said.

The panel identified one of the fans and based on evidence provided was "satisfied" that he had called Harris a "black b******" and a "black c***."

The fan received no punishment for racially abusing Harris.

The panel also "unanimously considered" the fan was a Cosby United supporter; the club had tried to deny this, despite the fact he lives in Cosby, is a local businessman known in the area, Cosby United is his local club and his son played for the affiliated youth team.

Cosby United showed no "insight or remorse" for the racist language from its fan, the panel said, and made no attempt to take any action, such as banning the supporter, issuing warnings about fan behavior or offering an apology to Harris or FC Wymeswold.

Cosby United did not immediately respond to CNN's request for comment on the FA's disciplinary panel conclusions. Leicestershire Police told CNN that the investigation into the incident has been completed and no charges have been made.

"It was disgusting, hearing all those chants," Harris told CNN. "As I've looked round to the referee, he's waiting for me to take it (the penalty). As I've run up, he (the fan) sang: You black ...' singing slur.

"After that it all got heated. I asked the referee: 'Did you hear that? Can you deal with that?' He said he'd not heard anything. That was from just behind the goal.

"Meanwhile, there's one on the halfway line as well, in the stands, and after I've gone in for a challenge, that's when I've heard: 'Typical black man, ruin it for everybody.'"

Harris was sent off for the tackle with a Cosby player -- a "feisty challenge," he recalls the referee telling him -- and made his way back to the changing rooms.

Reece Lewin, one of Harris' Wymeswold teammates, then confronted the referee about the racist abuse and was sent off as a result.

This led to several Wymeswold players to walk off the pitch and, according to the panel's report, a mass brawl broke out and the match was abandoned.

"I just didn't want to go through it again," he says of his decision. "It's not so much the football side but if I go through that again, it will ruin me."

The independent panel concluded that Wymeswold players and supporters were the aggressors.

"At first, I didn't know what to do," Harris says. "My head was spinning ... it was sad, that's all I can say, it was sad. I just wanted a bit of support from the ref because that's who you can look to on the pitch and after it carried on, I felt a bit empty.

"It's hard to explain, I was just lost. It didn't feel like football when I was on the pitch."

Harris says the man who racially abused him continued to harass his family, following them around the ground for more than half an hour.

"He's making these noises, referring to me as an animal," he recalls. "A lot can happen in half an hour, what if he'd got violent towards my family members?

"They got told to remove themselves from the ground and, to me, that's racism because the linesman has heard it and witnesses in the stands are saying: 'He's being racist' but they're telling my family members to get out."

Harris says incidents such as these are common in English amateur football.

According to Kick It Out, a UK organization that works to tackle discrimination in professional and grassroots football, reports of discrimination rose by 32% in 2018/19 compared to the previous season.

Racism remains the most common form of discrimination and has risen "alarmingly," Kick It Out says, with reports increasing by 43%.

"In professional football, you've got big grounds, thousands of supporters, police," Harris says. "But in ours (amateur), you can be racist. He could find out where you're playing the next game, he can just walk through the gate, stand around the side and give it to you again.

"The only support -- well he should be the support -- is the referee that's standing on the pitch, but he's on his own. So they can follow you wherever you go."

Racism on the rise

But the rise in incidents of racism at football matches is just a microcosm of British society as whole.

In October, a UK government report revealed there has been an increase in hate crimes for a sixth consecutive year. Since 2012/13, the number of hate crimes reported by police has more than doubled.

Over the past two seasons, high-profile incidents involving Raheem Sterling, Romelu Lukaku and the England national team have served as ugly reminders that racism remains entrenched within the sport.

Only last week, the manager of non-league side Haringey Borough decided to pull his team off the pitch after his goalkeeper was allegedly racially abused and spat at by opposition fans during an FA Cup qualifying match against Yeovil Town.

READ: Is team's decision to walk off pitch over racist abuse a watershed moment for football?

"First thing, I wasn't surprised at all. It's everywhere," Harris says of the incident. "But (it gave me) the same emotions, you just want it to stop but it's not going to stop.

"I just hope he gets the support he deserves."

Whether at the highest level or down at grassroots, racism in football sadly, inevitably, shows no signs of ending.